The Earned Income Tax Credit (EITC) gives tax credits to those who are in work, but are on a low income. In new research, David Simon finds that the policy can benefit its recipients beyond income support. He writes that for mothers who qualify for the credit, an additional $1,000 in the value of the EITC reduces the incidence of low birth weight births by 3 out of every 100 children.

Can increasing the income of those living in poverty improve their outcomes? This important question remains the focus of ongoing debate in American policy. In recent research we show that income transfers to pregnant women through a work-conditional tax subsidy substantially improves the health of their new born children.  A 1993 tax reform law expanded the earnings received by working families under the Earned Income Tax Credit (EITC), a tax-based transfer program to working low income Americans.  An additional $1,000 in tax credits reduces the incidence of low birth weight births by approximately 3 out of every 100 children born to mothers likely to qualify for the credit.  The EITC is a central feature of the United States safety net, and the role of the EITC in improving the health of new born children should be taken into account as one of the programs many benefits.  More generally, non-health programs designed to alleviate poverty can result in substantial health gains.

Researchers have traditionally found it difficult to determine whether income has casual effect on health.  It is not enough to statistically calculate the correlation between income and health in survey data: traits correlated with both income and health status could obscure the true effect of increasing income.  For example, a woman who has a chronic illness may earn less due to her sickness and also be genetically predisposed to having unhealthy children. In this case, the correlation between family income and child health is caused by the health of the mother and not her level of income, implying that policies designed to increase income will not necessarily improve a child’s outcomes. We use expansions to the EITC to get around this problem; specifically, we show that during an expansion there are contemporaneous improvements in birth outcomes for those women who are eligible for a higher income subsidy under the expansion relative to those who are not. This allows us to estimate how changes in income change infant health without the concern that unobserved family traits and maternal behaviors are driving both maternal income and birth outcomes.

The EITC is a central feature of the United States’ safety net for the working poor. The amount of the income subsidy depends on a tax-payer’s earned income and number of children. Benefits are phased in as a tax payer earns positive income up to some threshold (dependent on number of children).  Based on the 2011 schedule, a family with two or more children gets an additional 40 cents for every dollar they earn up to a maximum earnings of $12,780. These families will continue to receive the maximum credit amount (in this case of $5112 dollars) until family income exceeds $16690, after which the subsidy is gradually phased out as earnings increase.

A 1993 reform to the tax code caused qualifying mothers with two or more children to receive a substantially larger income subsidy than qualifying mothers with only one child.  Figure 1 below shows how the maximum allowed dollars of EITC benefits have changed overtime and across families with different numbers of children.  Depending on the year, families with no children qualify for little to no subsidy.  After 1993, tax reform in the United States led to a stark increase in the maximum dollars of benefits that families with more than one child qualified for. Crucially, the increase in benefits was much greater for mothers who had two or more children relative to one child.  Pregnant women qualify for the income subsidy based on the number of children in the household during their time of pregnancy. For example, when a mother is pregnant with her third child the tax subsidy she receives during pregnancy will be based on the two children who have already been born.

Using birth certificate data, we have information on birth weight and birth order for nearly all births in the United States from 1983 to 1999. Infants born weighing less than 2,500 grams are classified as being low birth weight, and we use this classification as a proxy for a child’s health at birth. Low birth weight status is typically used by researchers studying birth outcomes and it has been well documented that infants born with low birth weight have worse health and economic outcomes in adulthood [link to Currie, 2011].  Knowing birth parity (1st, 2nd, or 3rd or higher birth) is essential for evaluating the impact of the Earned Income Tax Credit as it allows us to compare birth outcomes of mothers who did not have any children in their household during their pregnancy to those who had one or two or more children, and therefore qualify for a larger subsidy. Birth certificates also have information on marital status and mother’s education, which we use to limit our sample to births to unmarried mothers with no more than a high school degree.  Limiting ourselves to looking at these lower socio economic status mothers allows us to focus on families whose income is likely to be low enough such that they will qualify for the tax credit.

Quantifying the above benefits reveals that an additional $1000 increase in work conditional tax credits reduces the incidence of low birth weight births by approximately 3 out of every 100 children born to single low-education mothers. Increasing the resources to low income families through a work-dependent tax credit can indeed improve infant health. This could be happening if higher income leads to higher quality prenatal care, reductions in maternal stress, and reductions in smoking (we explore these channels in more detail in our paper).  While the typical objective of safety net programs is to relieve poverty, work-dependent income transfers in this case also produce large health benefits. These health benefits are traditionally not taken into account by policy makers and are important to consider when debating the merits of expanding (or defunding) the non-health safety net.

This article is based on the paper, co-authored with Hilary Hoynes and Doug Millers, “Income, the Earned Income Tax Credit, and Infant Health” in the American Economic Journal: Economic Policy. 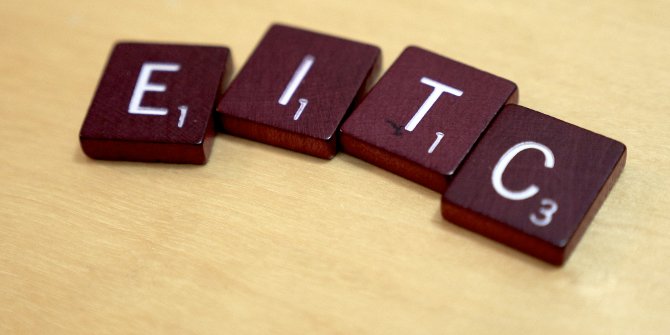