China and Russia have engaged in enhanced cooperation in a number of areas in recent years. Constantinos Filis assesses how Chinese-Russian relations have developed and whether a strategic alliance between the two countries could effectively balance the power of the West. He writes that given the West’s usefulness to both Moscow and Beijing, the striking of a long-term balance that is conducive to cooperation and increasing competition is likely to be the most probable course.

The joint Chinese-Russian naval exercise in the Mediterranean ended a few days ago. Similar joint exercises have been held in the Pacific in an effort, on the one hand, to point up the dynamic in their strategic relations, and, on the other, to challenge U.S. naval superiority. Although such actions are for the time being more symbolic than substantial in impact, their expanded geographical range nevertheless marks the development of interests in regions beyond immediate vital Sino-Russian interests. But are Beijing and Moscow in a position, and willing, to contend with Washington on a multilevel and global scale?

Let’s look first at their limitations, the strongest of which is the partially opportunistic nature of an alliance between two powers that, in many areas, are in heated competition with one another. If the power gap between China and Russia continues to grow at the current rate, Moscow will have to seek ways to offset the growing imbalance that, in the long term, will undermine its position on the world stage.

Meanwhile, China will have little in the way of reasons to back a country with political magnitude but a shrinking reach, as well as a problematic economy with growing needs that it may frequently be unable to cover on its own. If, counter to expectations, Moscow grows stronger, its aspirations will be difficult to keep in check. China currently values Russia as a source of technological know-how and innovation, as a supplier of natural gas – contributing in terms of pricing and quantities to China’s negotiating leverage with other suppliers – and as a fellow actor that shares Beijing’s desire to alter the current status quo.

So, even if they agree to work together on an equal footing, reality will inevitably reshape their cooperation framework. It is precisely this imbalance that is rendering Moscow more ‘susceptible’ to facilitating Beijing’s objectives, a trend being strengthened by Russia’s economic recession and rift with the West. In fact, the increasing pressure the Kremlin is coming under from its Western partners – some of whom are attempting to exploit the situation, not to force the adoption of a more constructive stance on the Ukraine issue, but to bring the Russian economy to its knees – is effectively forcing Russia into China’s embrace.

The latter, capitalising on the state of affairs, concluded an energy agreement on particularly favourable terms; assisted, through currency exchange, in the management of the dramatic fall in the ruble; and is firmly promoting the use of the Chinese currency in a number of bilateral transactions, creating, in parallel, a climate of trust while pointing up its usefulness to Moscow. All of these function as something of a diversion from the clear risk of the assimilation of Russian elements by neighbouring communities in China, while Moscow is not in a position to adequately counter Beijing’s economic activities in Central Asia and development of energy synergies, both of which have the potential to weaken Moscow’s role.

But what is it that brings Moscow and Beijing closer together? First of all, their shared stance against intervention in domestic developments, even in the case of despotic regimes, which results from their inability to impact developments beyond their immediate environs, as well as from their concern that such a precedent, once set, could be used against them. They also share an uneasy awareness of the fact that “velvet” regime changes engineered via revolutionary elements within given countries not only strengthen social movements that dispute the centralisation of power, but also circumvent the UN, where both capitals hold veto power. Over the past decade or so, Moscow and Beijing have voted together on many UN resolutions, having, in fact, opted for a tactic of greater “exposure” of Russia and discreet, though visible, support of China.

Beyond that, they neighbour on a region rife with problems that they can confront more effectively together. In addition to facing regional security issues, they are pursuing influence with the aim of establishing a foothold against the U.S. and its allies. Knowing that only the sum of their respective clout can alter the balance of power, they are also prioritising their cooperation as a deterrent against competitors in the wider Asian region. It should be noted that their claims are clearly more categorical in their near abroad, where they brook no challenge to their dominant position.

A key aspect of and challenge for Sino-Russian relations is the creation of alternative institutional mechanisms as a bulwark against those controlled by Western structures. Russia’s aim here is to mitigate Western pressure regarding its geopolitical choices; Western pressure that has left Russia financially isolated. China, on the other hand, wants to free itself from Western rules and obligations regarding economic activities. Thus, the ultimate objective of recent initiatives is the development of a more flexible regulatory framework – amenable to the Eastern dynamic – followed by the gradual adoption of more widely acceptable terms. Their common ground is their need for a less regulated financial/trade/business environment.

However, the attraction of access to significant capital (from China) and ease of transactions with authoritarian leaderships with no obligation to comply with the existing system is somewhat dimmed by (unsavoury) methods of engagement as compared to the alternative, Western model of freedom of access to and provision of goods and services, which facilitates movement and investment activities.

In a fragmented environment, multiple risks, evolving challenges, continuous economic integration, and the need to find common operative solutions – in combination with growing interdependency – effectively push back to the distant future any strong pursuit of changes to the existing status quo. Given, as well, the West’s multifaceted usefulness to both Moscow and Beijing, the striking of a long-term balance that is conducive to cooperation and increasing competition looks to be the most probable course.

Posted In: Constantinos Filis | US foreign affairs and the North American neighbourhood 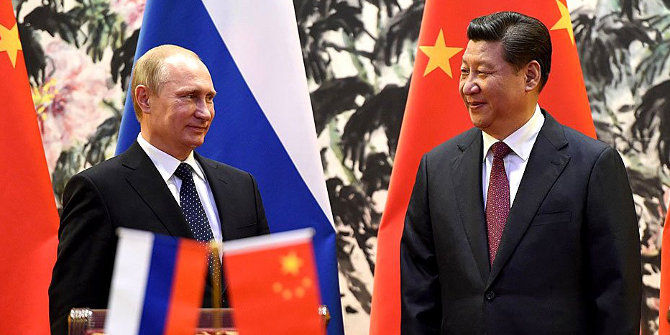