In the aftermath of the Great Recession, millions of Americans received extensions to their unemployment benefits – in some cases extending them to 99 weeks. At the end of 2013, these extended benefits expired, leading many to call on Congress to reauthorize their extension. But does extending unemployment benefits make sound economic sense? In new research, Stanislav Rabinovich and Kurt Mitman argue that the government was correct to rein in the duration of benefits. They write that reducing the duration of benefits helps the unemployed to find jobs faster, and leads to much less volatile unemployment.

The conventional wisdom is that unemployment benefits should be extended in recessions. The economic justification for it is based on the concept of an insurance-incentive tradeoff involved in unemployment insurance design. The probability of finding a job depends on both the search intensity of unemployed workers – e.g., how many hours they spend searching for jobs – and the job offer arrival rate, i.e. the availability of job openings. Unemployment insurance discourages workers from searching for jobs; hence optimal policy design trades off the benefit provided to unemployed workers (insurance) against the cost of reduced search intensity (incentives). In a recession, however, the job offer arrival rate is low, and so workers are unlikely to find a job regardless of search intensity. As a result, the incentive cost of unemployment insurance is low in recessions, while the benefit is high.

In recent research, we show that this conventional wisdom, although sound, is incomplete on two dimensions. First, implicit in this line of reasoning is the assumption that the job offer arrival rate itself is independent of unemployment benefits. However, this assumption is inconsistent with modern theories of unemployment, in which wages are determined by bargaining between workers and employers, and hence depend on workers’ outside options – their value of being unemployed. Unemployment benefits, by increasing bargained wages, lower employers’ incentives to create jobs. As a result, the low job offer arrival rate – which ostensibly justifies high unemployment insurance – may itself be partly caused by high unemployment insurance. This suggests that properly accounting for firm-side incentives may overturn the conventional wisdom described above.

Second, the behavior of employers and workers in the economy depends not only on current policy, but also on expectations about future policies. For example, an extension of unemployment benefits in a recession might not discourage job-finding too much if people expect this extension to be reversed in the near future, but the same extension could have a drastic effect if people expect it to be long-lasting. This suggests that economic analysis should be looking at the optimal design of paths of policies, not simply current policies. 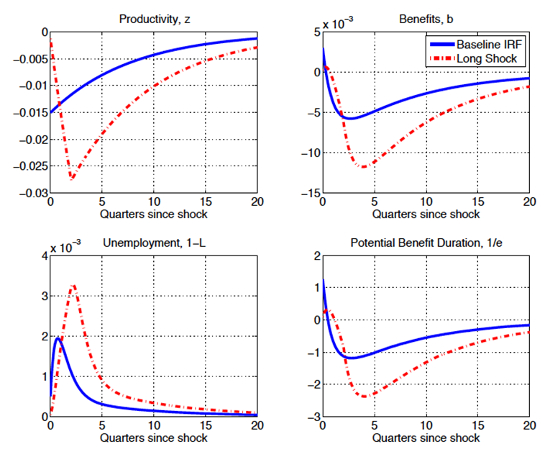 Note: the figure shows the responses of optimal benefit amount, benefit duration and the unemployment rate to a temporary drop in productivity (blue) and a persistent drop in productivity (red). In both cases, benefits are initially extended, but then drop substantially below their pre-recession level.

Switching from the current U.S. policy to the optimal policy generates significant welfare gains – even for the unemployed, since it helps them find jobs faster. In addition, switching to the optimal policy results in much less volatile unemployment. The role of expectations is key for understanding the dynamics of optimal policy and the resulting welfare gains. In particular, even though unemployment benefits are extended initially at the onset of a recession, the adverse employment effects of this are substantially alleviated: unemployment does not increase much, and recovers faster from adverse shocks than it does under the current policy, precisely because employers expect benefits to be cut in the future.

It is tempting to misconstrue our findings as arguing against generous unemployment insurance. This is inaccurate. Under the optimal policy, the average level and duration of unemployment benefits are almost exactly the same as currently in the U.S. It is the cyclicality – the variation in response to recessions and booms – that is the opposite of the current policy. By changing the cyclicality and not the average, the government could achieve less volatile unemployment and higher welfare.

The success of such a policy depends on the government’s ability to commit to it. In particular, the fast recovery in the aftermath of a recession is achieved because agents expect future benefits to be lowered. However, a government without such commitment power has a temptation to extend unemployment benefits and keep them high when there are a lot of unemployed workers. This would imply that the threat of lowering future unemployment benefits – a key ingredient of the optimal policy – might not be credible. Investigating policy design in the absence of a commitment is the subject of ongoing research.

This article is based on the paper “Optimal unemployment insurance in an equilibrium business-cycle model” in the Journal of Monetary Economics.

Stanislav Rabinovich – Amherst College
Stanislav Rabinovich is an Assistant Professor of Economics at Amherst College. He received his PhD from the University of Pennsylvania. His research interests are at the intersection of macroeconomics and labor economics, especially the development of search models and their application to labor markets and policy design. His recent work has focused on monetary theory, unemployment insurance, and jobless recoveries.

Kurt Mitman – Stockholm University, Sweden
Kurt Mitman is an Assistant Professor at the Institute for International Economic Studies at Stockholm University.  He received his PhD from the University of Pennsylvania.  His research focuses broadly on macroeconomics, with a particular interest in housing, household debt and default, and labor markets.