Growing immigration has meant Canadian unions have had to learn how to better represent migrant workers.

Growing immigration has meant Canadian unions have had to learn how to better represent migrant workers.

In the past decade, the massive increase in the number of migrant workers coming to Canada has forced the country’s trade unions to rethink their traditional approaches towards representation. Jason Foster and Alison Taylor write that trade unions had little precedent of how to respond to the large upswing in migrant numbers, and that their responses have ranged from those who help employers take advantage of migrant workers to those who defend their rights and help them to gain language and other skills.

The face of Canada’s workforce has changed dramatically over the past decade as the number of migrant workers living in the country has quadrupled. In addition to many other consequences, those changes have forced Canadian trade unions to rethink traditional approaches, in particular, approaches to representing members who are migrant workers.

Canada, like most developed nations, has a longstanding program regulating the use of migrant workers. In Canada it is called the Temporary Foreign Worker Program (TFWP). However, unlike other countries, until recently Canada’s migrant worker program was small and relatively unimportant in the labour market. In the 1990s, fewer than 90,000 migrant workers resided in Canada, and the largest proportion of them were high-skilled professionals or actors and performers.

However, sweeping changes to the program in 2002 resulted in an influx of lower-skilled migrant workers, most arriving to work in the retail, food and hospitality and construction industries. The number of migrant workers living in Canada swelled to almost 400,000 by 2013.

Because the TFWP was so small for most of its history, the Canadian trade union movement had little experience with migrant workers. Therefore, when the program expanded, unions were ill-equipped to respond.

Further, labour’s history with immigration was hardly stellar. Before World War II, unions adopted an anti-immigrant and often racist stance toward newcomers to Canada. In the past 50 years, labour’s attitudes toward immigration have shifted significantly and they can now be seen taking pro-immigration stands, although immigration still remains a low priority in the movement. Addressing the issue of temporary foreign labour has no historical precedent in Canadian labour.

Looking across to Europe, whose unions have been confronting the question of migrant labour for much longer, also offers little direction to Canadian unions given the vast differences in labour relations laws and labour market structure in Europe. European unions’ responses to migrant workers have been diverse but generally reflect a moderate degree of suspicion and hesitance to embrace them.

So, Canadian unions, in many ways, were in unchartered waters. How has it turned out so far?

Not surprisingly, the record is mixed. There has been a range of reactions to date. On the one end, there are unions who work with employers to facilitate their use of migrant labour, often to the disadvantage of the migrant workers themselves. The union makes no effort to prevent exploitation and does little to include the workers into the union. The goal of their effort is to assist the employer in advancing its agenda. The union seen to adopt this approach is the Christian Labour Association of Canada (CLAC), widely known for its cooperative and collaborationist approach to labour relations. 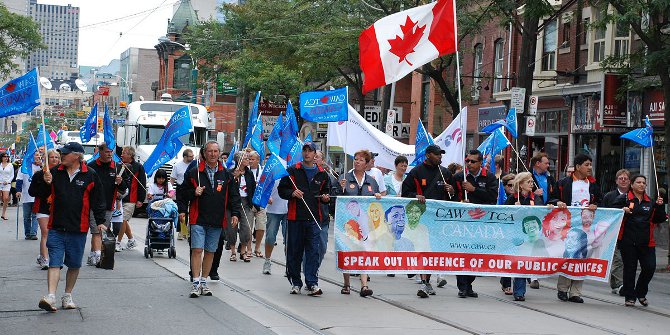 In the middle we find unions that have resisted the inclusion of migrant workers in their midst, even though they do not actively assist the employer. These unions, most often found in the construction trades and higher-skilled professions such as teachers, bestow a level of second-class membership on migrant workers, or refuse to take any special steps to ensure their rights are protected.

Treating migrant workers “just like any other member” may seem like a sound premise. However, it ignores the reality of migrant workers’ experience. Migrant workers in Canada are uniquely dependent upon the employer and thus more susceptible to poor treatment and exploitation. Under the rules of the TFWP, work permits stipulate the occupation, location and employer name where the migrant is allowed to work. These requirements substantially restrict migrant workers’ mobility rights; they cannot switch jobs easily, can only be hired by employers with government permission to use migrant labour, they cannot geographically re-locate and they cannot switch occupations. The TFWP also limits a worker’s stay in Canada to four years, making integration into the community difficult.

Fortunately, some unions have recognized these unique situations and have acted to defend migrant workers. These unions take an active approach to representing migrant workers, altering their usual approaches to ensure proper protection. As it turns out, unions representing lower-skilled workers tend to be more open to this approach.

One of the best examples is United Food and Commercial Workers (UFCW) Local 1118, a meatpacking union in the province of Alberta. They bargained special language into their agreement to require the employer to apply for permanent residency status for all migrant workers they hire. The union, rather than the employer, performed the initial orientation to the workplace and community. They arranged for English as a Second Language classes to be held at the union hall, with union members assisting. Finally, they ensured every shift had a shop steward working who spoke migrants’ language. The effect has been a more unified membership and entrenched protections for migrant workers.

As astute readers may have observed, there appears to be a link between a union’s traditional members and their openness to take active steps to represent migrant workers. Unions of lower-skilled members, for whom the so-called threat of migrant labour replacing “Canadians” may be most acute, have a motivation to ensure not only that migrant labour is not mis-used by the employer but that the union can be made stronger by their presence. Unions that represent relatively higher-status members, such as nurses and skilled construction workers, seem to be more resistant, possibly because they are less likely to see the unique vulnerabilities that migrant workers face.

The good news is that over the past few years, as unions have grown accustomed to representing migrant workers, they have learned from their experience and from one another. Groups such as the nurses’ unions have shifted how they approach new migrant workers, adopting some of the initiatives pioneered by UFCW 1118. This observation suggests that labour’s shady history with immigrants may be truly left behind and they prepare themselves for the 21st century challenge of representing a diverse and geographically mobile workforce.

The reality of migrant labour as a significant portion of Canada’s labour market is likely to remain. The challenge for unions, as well as policy-makers, is to work to prevent their exploitation and abuse.

This article is based on the paper, ‘The dynamics of union responses to migrant workers in Canada’, in Work, employment and society.

Jason Foster – Athabasca University
Jason Foster is Assistant Professor, Human Resources and Labour Relations at Athabasca University in Alberta, Canada. He has researched migrant labour in Canada for a number of years and is particularly interested in the interactions between unions and migrant workers. He is also interested in union renewal and revitalization in the 21st century.