As the Great Recession hit, American cities professional organizations and foundations increased efforts to promote civic engagement activities.  Through analysis of 2006, 2009, and 2012 survey results, Marcia Godwin finds that cities increased their use of civic engagement tools, especially those involving technology, but reduced strategic planning efforts and the use of citizen surveys.  Coming out of the Great Recession, managers in the most affected cities were the most supportive of civic engagement.  While managers generally support civic engagement, this support does not widely extend to giving citizens the authority to make decisions.

Ironically, these outreach efforts increased in the midst of the Great Recession that began in 2007.  Local governments experienced lag effects due to the timing of tax collections and assessments, which meant that their revenues bottomed out later than for private businesses.  For example, the City of Detroit, Michigan did not file for bankruptcy until 2013 after several years of budget shortfalls.  Recovery has been slow and hampered by pension obligations facing many cities.

In new research, I investigated civic engagement by drawing on responses from 585 cities that answered the 2006, 2009, and 2012 State of the Profession surveys sponsored by ICMA; the respondents were primarily city managers.  Each survey included civic engagement questions and the 2009 survey focused on the economic downturn.  Although there were differences from survey to survey in the exact questions asked, this approach had the benefit of yielding results about changes in civic engagement activities over time and the association between civic engagement and fiscal stress.

As shown in Figure 1, the proportion of cities providing civic engagement opportunities was at near universal levels in 2006 and 2009.  Interestingly, a higher percentage of cities reported providing resources for civic engagement activities in 2009 than in 2006.  The reason appears to be due to the increased adoption of technological tools:  web sites, email, cable television, and social media.  However, this picture was not entirely rosy as the use of strategic plans declined from 77 percent to 66 percent and the use of citizen surveys declined as well, from 66 percent to 59 percent.  The crafting of strategic plans can require considerable staff time and financial resources.  Conducting citizen surveys also can require consultant, staff, printing, and/or software costs.  Therefore, it seems that the use of technological tools is viewed by leaders as a necessary part of providing service while strategic planning and surveys are more vulnerable to budget cuts.

Figure 1 – Frequency of Civic Engagement Activities in American Cities, 2006 and 2009 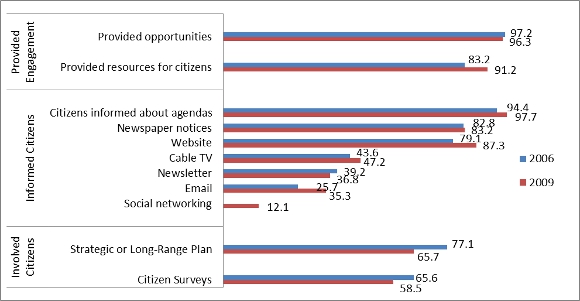 Source:  2012 ICMA State of the Profession survey. Only cities that also responded to the 2006 and 2009 surveys are included.  Results range from 1-5, with 5 being the highest.

It is important to examine the association between fiscal stress and civic engagement when considering prospects for the increased use of civic engagement strategies.  Only 18 percent of American cities reported being only minimally impacted by the economic downturn in 2009.  Most cities were moderately (45 percent) or significantly impacted (30 percent) at that time.  Six percent reported severe impacts.  As shown in Figure 3, the more cities were impacted by the Great Recession, the higher their agreement with civic engagement goals, use of civic engagement, and level of citizen participation.  The most fiscally stressed cities also reported less civility in their public discourse.  These differences are relatively minor, but may indicate that managers in the most fiscally stressed cities – which include many of America’s most populous and traditionally industrial cities – recognize that civic engagement is necessary in spite of contentious politics. 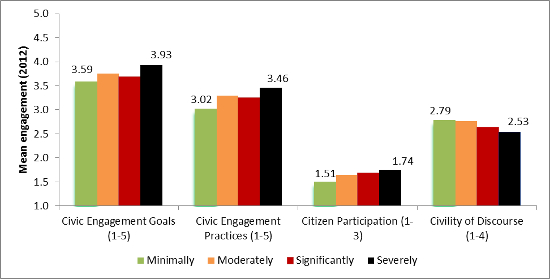 The findings just begin to scratch the surface of trends in civic engagement activities.  The relatively low support for citizen empowerment in decision-making could change as cities gain experience with participatory budgeting (PB) programs.  Beginning with adoption in a single Chicago district in 2009, PB has spread to about half of New York City’s districts and to a number of large American cities.  The City of Vallejo, California, which experienced bankruptcy just before the Great Recession, was the first in the United States to adopt a citywide process.  It may not be a coincidence that PB has been most popular in cities where fiscal stress and civic engagement activities have been the most interconnected.

This article is based on “Civic Engagement and Fiscal Stress in American Cities:  Insights from the Great Recession,” in State and Local Government Review.  Thanks to Sage publishers, the article is now ungated until the end of July.