The increasing polarization of U.S. politics has seen the rise of partisan ‘echo chambers’ with little interaction between those at opposite poles. This division has broadened to include lifestyles, with liberals often characterized as ‘latte-drinking’ and conservatives as ‘gun enthusiasts’, for example. In new research, Daniel DellaPosta, Yongren Shi, and Michael Macy look at how political ideology becomes linked to people’s lifestyles. They show how demographic influences on opinions can be amplified by the self-reinforcing dynamics of peer group interactions.

In the run-up to the 2004 presidential primaries, the conservative Club for Growth ran a television ad attacking Democratic frontrunner Howard Dean, the liberal former governor of Vermont. The ad went viral and the message became a right-wing mantra: “Howard Dean should take his tax-hiking, government-expanding, latte-drinking, sushi-eating, Volvo-driving, New York Times-reading, body-piercing, Hollywood-loving left-wing freak show back to Vermont where it belongs.”

The humor reflected the resonance with the perceived ideological alignment between policy preferences on the one hand, and on the other, lifestyle choices that have no intrinsic political implications. Do these stereotypes have a basis in fact? And if so, why should liberals prefer Volvos over F150s, lattes over Folgers, or pierced noses over pierced ears?

To go beyond the anecdotes, in new research we mined the nationally representative General Social Survey, which has been collected at the University of Chicago for over 40 years. Some of what we found is unsurprising, especially for battleground issues in the “culture wars.” For example, people who identify as liberal report praying less often, are less likely to own guns, and much more likely to support animal rights.

Yet ideological alignment can also veer in less expected directions. Political ideology is highly correlated not only with musical tastes (liberals prefer new age, blues, reggae, and jazz while conservatives prefer gospel and country), but also with attitudes toward modern art (conservatives often feel “a child could do it”). Even though conservatives are more likely to report that we trust too much in science and not enough in religious faith, liberals are more likely to report superstitious beliefs in the supernatural power of dead ancestors and to read horoscopes. We found strong political divisions not just on morally supercharged questions like same-sex marriage and abortion, but also on seemingly less political questions about parenting and marriage. Conservatives are more likely to approve of “spanking” one’s children and to report that any marriage without children is not “fully complete.” Liberals are overwhelmingly more likely to feel that couples should live together before marriage and to view divorce as beneficial when a marriage is troubled or unhappy.

It is tempting to explain these patterns by searching for some innate affinity between ideology and lifestyle preferences. For instance, Stephen Colbert offers an amusing explanation: “Liberals hate America!” The idea is that liberals prefer lattes, Volvos, and Beethoven because of a consistent preference for all things foreign. But how would an underlying commitment to xenophilia explain the liberal predilection for home-grown mysticism and New Age spirituality?

Another approach is to search for a “third variable” that influences both political ideology and lifestyle, such as a deeply rooted demographic or socioeconomic trait. Horoscope reading, for example, may be related to coming of age in the Aquarian 1960’s or living in “the People’s Republic of Santa Monica.” The idea is simple and compelling:  an individual’s lifestyle preferences and politics are shaped by material self-interests, formative personal experiences, and exposure to fundamental cultural values which in turn can be traced to one’s birth cohort, schooling, gender, ethnicity, or social class background. Yet this explanation runs into three serious problems. First, when we included these traits in our statistical models, they left much of the lifestyle-politics correlation unexplained. Second, while it is easy to invent a “just so” story for each lifestyle correlation (e.g. Left Coast Aquarians are liberal and superstitious, while farmers are conservative and like country music and hunting), coming up with a story for each of the 14,436 statistically significant lifestyle correlations is likely to exhaust one’s theoretical imagination. Third, a skeptic will surely question whether the association between lifestyle and demographics itself needs to be explained. 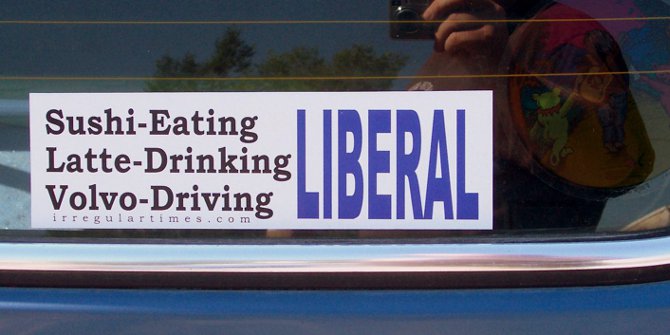 Using a computational model, we pursued a very different explanatory strategy. Survey based opinion research looks within the individual for an explanation because that is where the available data let us look. We have detailed information about each respondent’s individual demographic traits. What survey research almost never gives us is information about the attributes of a respondent’s friends, family, co-workers, and neighbors. But maybe that is where we need to look? Maybe politics and lifestyle are both influenced by our social interactions?

Could this cycle of selective influence be capable of producing a world of “latte liberals” and “bird-hunting conservatives” like the one in which we live? We built a simple computer model in which a population of simulated “agents” interact repeatedly and selectively adopt the opinions of their neighbors. The result was widespread alignment across “opinions” that otherwise had no intrinsic connection to one another.

Of course, this does not mean that conventional explanations, based on influences operating within rather than between individuals, can be dismissed. In fact, our models suggested a different way of understanding explanations based on intrinsic affinities or demographic backgrounds. When we allowed an agent’s opinions to be influenced by their individual demographic background, we found that even a vanishingly small effect became dramatically amplified by the self-reinforcing dynamics of homophily and influence. Once reverberated through the “echo chamber” of interaction with those who are similar, selective influence can carve deep cultural canyons out of what started out as shallow demographic ditches, by coordinating ideological alignment along a whole host of issues even in very large and diverse populations.

This last point confirms what we may have suspected all along: that the anti-Dean ad points to something real, but it’s probably not really about the lattes or Volvos. While the “latte liberal” meme is harmless enough, our study suggests a deeper danger: When seemingly arbitrary lifestyle distinctions become emblematic of more consequential  ideological conflicts, the cultural “common ground” between opposing sides becomes increasingly eroded, and with it, the possibility for moderation, compromise, tolerance, and reconciliation.

This article is based on the paper ‘Why Do Liberals Drink Lattes?’ in the American Journal of Sociology.