More accurate estimates of social mobility suggest that the American dream is not so easily attainable.

More accurate estimates of social mobility suggest that the American dream is not so easily attainable.

Inequality and the lack of social mobility are of growing concern to the American public and politicians, with many worried that the ‘American dream’ is becoming increasingly unobtainable for themselves or their children. In new research, Bhashkar Mazumder argues that by using a relatively short window of time to estimate people’s socioeconomic status, researchers have overstated the degree of social mobility in society. He writes that more accurate estimates of intergenerational mobility place the U.S. among the least socially mobile countries in the developed world.

In a December 2013 speech, President Barack Obama referred to growing inequality and lack of upward mobility as “the defining challenge of our time.” The President’s words serve to highlight the growing concern among the public about the American dream- that with hard work anyone can be successful regardless of their circumstances at birth.  As a result there is increasing attention being placed on studies of intergenerational mobility.  These studies typically try to determine the degree to which a child’s eventual success in life is related to their parents’ economic status.  A very strong association, for example, implies a low degree of intergenerational mobility as it suggests that children largely occupy their parents’ position in society.  There is growing consensus that this association is higher in the U.S. and the U.K. than in most advanced countries.  In calculating this relationship, however, I argue that studies need to use long windows of time to measure socioeconomic status.  Otherwise, researchers will understate the intergenerational association and overstate the degree of social mobility in society.

But how exactly do researchers measure socioeconomic status?  Sociologists who first pioneered these studies like to use measures of “occupational prestige” based on surveys ranking the social prestige of different jobs.  Economists, who naturally tend to focus on the importance of economic buying power, prefer to use income.  To illustrate the importance of the exact window of time that is used to measure socioeconomic status, consider the following example shown in Figure 1.  This graph shows the occupational prestige (right hand side) and income (left hand side) of a man born in 1945 over the course of his working years. This man begins his career in 1968 as a construction worker, then proceeds in 1970 to take a job as a secondary school teacher. From 1970 on, he works either as a teacher, school administrator, or school counselor. These various jobs, however, are associated with different income levels and different degrees of prestige.  Therefore, the association of this man’s status with that of his offspring may well depend on when in his lifecycle we take the measurement.  Suppose the son of this man spends most of his career as a teacher. Then the intergenerational association in occupational prestige would presumably be quite high if one used the father’s occupation in say 1971, when he was also a school teacher, relative to if one used the father’s occupation in 1968 when dad was a construction worker. 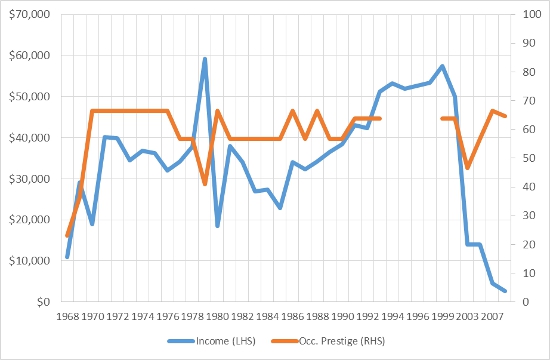 Many previous studies have shown that using only a single year of data to measure the income of parents will lead researchers to under-estimate the strength of intergenerational income associations and therefore overstate income mobility.  The solution is to take long time averages of parent income to overcome this problem.  In recent research, we also show that one can average occupational prestige over many years to better measure social mobility.  This issue is likely to become increasingly important as people move across occupations over their career much more now than they did in the past.

Using data from the University of Michigan’s Panel Study of Income Dynamics (PSID), we construct a dataset of male heads of households and their sons who eventually become heads of households.  The dataset combines thousands of career trajectories like the one shown in Figure 1. We then proceed to estimate intergenerational associations in both income and occupational prestige.  For this exercise we start by measuring the income and prestige of both fathers and sons at around the age of 42.  We then continue to measure the sons’ status at this age but gradually expand the window of time that we measure the fathers’ income and occupational prestige.  We use as many as ten years to average the socioeconomic status of fathers.

The results are shown in Figure 2. Here, we have standardized the intergenerational association to be exactly 1 when we use just 1 year to measure the fathers’ income or occupational prestige.  The longer time averages for the fathers generally tends to raise the association regardless of whether we use income or prestige.  When ten years of data are used, the estimates of the intergenerational association in income is 16.1 percent higher than it was when using one year of fathers’ income.  Similarly, the association in occupational prestige is 17.4 percent higher using 10 years of data rather than just 1 year.  Put another way, intergenerational mobility is significantly overstated when using just a few years of data to measure socioeconomic status.  These more accurate estimates of intergenerational mobility squarely place the US among the least socially mobile countries in the developed world. 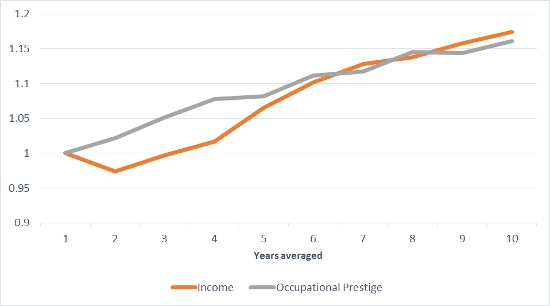 These results have potentially important implications. Relying on studies that use smaller time windows to measure the social status of parents could lead to an overly optimistic picture of social mobility in the United States.  Correctly measuring social mobility is an important first step to verifying whether or not the “American dream” is truly alive and well.

This article is based on the paper, ‘Using Occupation to Measure Intergenerational Mobility’, in The Annals of the American Academy of Political and Social Science.