Despite the 2016 election being more than a year away the presidential primary season appears to be in full swing, especially for the Republican Party, with its plethora of candidates. With the possibility of a scandal breaking for at least one candidate before the primary a seeming near certainty, it’s useful to examine why voters react to scandals in the way that they do. David A. M. Peterson and Beth Miller Vonnahme investigate the scandal around allegations of sexual harassment in 2012 that ended Herman Cain’s bid for the nomination. They find that those who watched network news declined the most in their assessment of Cain after the scandal, and cable news watchers, the least.

As the 2016 presidential race grinds into gear, the Republican field is looking to be one of the largest in history. With such a large field, it may be only a matter of time until one of the contenders is embroiled in a scandal. But how do voters respond to scandalous allegations against presidential candidates?

In the 2012 race for the Republican presidential nomination, candidates other than Mitt Romney went through a series of ups and downs.  Each took a turn as Romney’s main opponent and each returned to the pack after scrutiny by the public.  Herman Cain’s candidacy collapsed due to a scandal: allegations that he sexually harassed several women.  Prior to these allegations, Cain was considered a serious challenger and led in some polls.  These allegations eventually forced Cain to withdraw from the race.

Candidates for political office are often hampered by scandal, and a burgeoning literature has addressed how voters respond to scandalous behavior by candidates.  In general, a voter’s response to these allegations is conditioned by partisanship.  If the candidate is from the same party as the voter, the voter weighs scandalous information less than if the candidate is of the opposing party.  In a single party race like a nomination campaign, however, party does not serve as such as simple cue.  Republicans needed to make a decision from the field of fellow Republicans.  If there are going to be individual-level differences in how voters respond to the allegations about Herman Cain, what will be the source of these differences?

In recent work, we argue that responses to the allegations against Cain will vary among cable news viewers, network news viewers, and those who get their news from other sources (primarily local news).

Why would the choice of media source lead voters to react to these allegations differently?  Given the  choices available to voters, which media source a person attends captures, in part, how actively the person seeks out information that is either consistent with or challenges his or her predispositions.  Viewers of cable news have made a choice to seek out information that reaffirms their preexisting views.  Viewers of network news, by contrast, made a choice to acquire information less consistent with their worldview.  This choice of media source, then, captures openness to information and we should see differences in responses to these allegations across the different types of media consumers.

Why hasn’t this idea been explored previously?  Part of the problem with studying political scandals is they are unpredictable and it is rare for scholars to have adequate surveys in the field when they occur.  It is possible to study voters’ responses experimentally, but media choice is difficult to manipulate experimentally.  We were fortunate to have a survey of likely Iowa Caucus attendees in the field as the scandal broke.  Additionally, because of logistics, the first wave took a long time to collect (14 days).  This timeframe enabled us to compare respondents as the scandal evolved.

The survey was conducted by the Survey and Behavioral Research Service at Iowa State University.  In November 2012, we interviewed 1256 respondents and re-interviewed 940 respondents in December.  To measure attitudes about Cain, we asked how well the phrases “he is honest,” “he is intelligent,” and “he provides strong leadership” describe Cain.  The allegations against Cain surfaced on October 30th, right as the first wave went into the field, but the nature of the scandal changed on November 7th when one of the victims came forward with details of the events.  In our analyses, we compare respondents based on when they were interviewed (pre-November 7th, post November 7th in the first wave, and the December wave).

Figure 1 presents the average assessment of Cain, Romney, Michele Bachmann, and Rick Perry on the personality questions.  The bars represent the means and the lines represent the standard deviations.  Our respondents viewed all three candidates positively, but rated Cain as a serious contender. 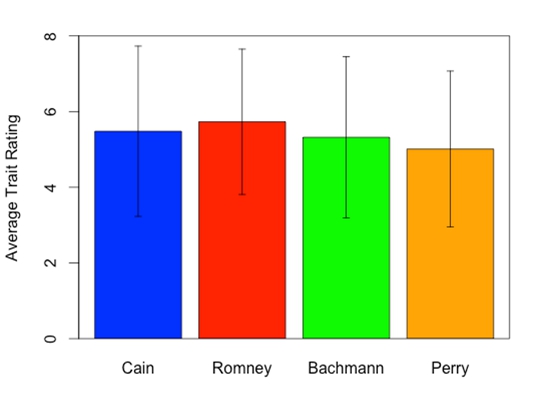 Turning to our hypothesis, a voter’s response should depend on the voter’s choice of media.  In Figure 2, we plot the average trait assessment of Cain for the three types of media consumers for the three time points.  The patterns of the three types of voters are quite different.  Among the pre-November 7th respondents, there is no significant difference between those who get their news from television networks and those who rely on other sources.  Cable news viewers assess Cain significantly higher than both of these groups.   Among respondents interviewed after November 7th, however, network TV viewers are the most negative by a substantial margin.  In fact, the difference between the pre- and post-November samples is only significant among network viewers. By the December wave, all three groups have significantly declined and the total decline in assessments of Cain occurred by roughly the same amount from the pre-November 7th respondents.

Figure 2 – Attitudes about Herman Cain by media preference and time We argue that this change is due to something about the respondents that led them to make certain media choices.  It is equally plausible that the changes occurred because the sources covered Cain differently.  To test for this, we performed a content analysis of the coverage of Cain by Fox News and NBC Nightly News between November 1st and November 15th.  We measured how each network described Cain’s intelligence, leadership, and integrity and plot these scores in Figure 3.

Not surprisingly, Fox generally presented a more favorable impression of Cain than NBC.  What is important, however, is that the lines are essentially parallel or that the slope of the line is steeper for Fox than for NBC.  In other words, the shift in how Cain’s personality was described did not vary across these two networks.  That makes it unlikely that the content of the coverage was responsible for the differences in Figure 2.

This article is based on the paper, ‘Aww, shucky ducky: Voter response to accusations of Herman Cain’s “inappropriate behavior” in Political Science & Politics.

David A. M. Peterson – Iowa State University
David A. M. Peterson is a Professor in the Department of Political Science at Iowa State University and editor of Political Behavior. His work focuses on many different aspects of American politics. He has also done work in political psychology and attitude strength, public opinion and elections, and state politics.

Beth Miller Vonnahme – University of Missouri, Kansas City
Beth Miller Vonnahme is an associate professor in the Department of Political Science at the University of Missouri-Kansas City. Her research interests fall within the general categories of public opinion and political behavior. Specifically, she is interested in the importance of psychological processes relating to the formation and persistence of political choices.