In 2005, after Congress failed to ratify the Kyoto Protocol, many American cities stepped up their efforts to reduce greenhouse gas emissions. However, by 2012, these efforts had fallen off, only two years after their peak. In new research, Rachel Krause writes that many cities decided to abandon their climate protection commitments because of the influence of mainstream political conservatism, and that this effect was more likely for cities which had achieved fewer environmental milestones.

Cities have been praised as “leaders” and “innovators” of climate policy. In the United States, where political conflict has overwhelmed efforts to develop comprehensive federal climate policy, municipalities have made quiet progress by adopting climate protection goals and working to reduce local greenhouse gas emissions. However, in the past few years, the tide seems to have again shifted and a notable number of the cities that had made formal climate protection commitments have abandoned them and ended their relationships with the organizations that facilitate these efforts. Our research finds that mainstream political opposition to local climate initiatives and programmatic ineffectiveness are driving this change.

Although a handful of cities had been involved in climate protection initiatives since the early 1990s, local efforts in the US really began to accelerate in 2005 in protest of the country’s failure to ratify the Kyoto Protocol. Local action in what had previously been considered almost exclusively a global issue was facilitated by two groups: the US Conference of Mayors Climate Protection Center (USCM CPC) and the transnational organization now known as ICLEI Local Governments for Sustainability. Although the USCM CPC brought attention to the movement, ICLEI is the more significant organization in terms of facilitating cities’ follow-through on their GHG reduction pledges. Specifically, ICLEI prescribes a five-milestone process for participating cities: (1) conduct a GHG emissions inventory; (2) adopt an emissions reduction target; (3) develop a climate action plan; (4) implement actions; and (5) monitor and verify results. These can be applied separately to government operations and the larger community.

The number of municipalities that joined ICLEI and had formal climate protection commitments increased almost fivefold between 2005 and 2010. However, by 2012, just two years after reaching its peak size with approximately 700 municipal members, participation in ICLEI had plummeted by over 20 percent (see Figure 1). 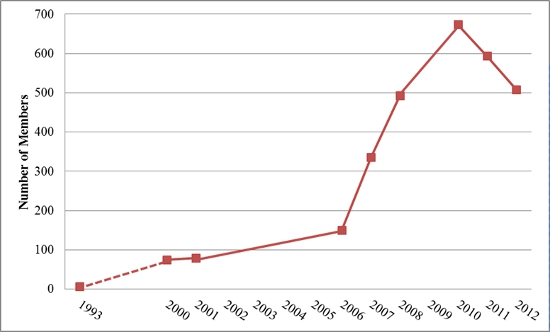 Past research on policy termination identifies three general explanations for why governments end programs or policies before they reach their goals or originally specified end-points: (1) opposing political ideology and interest group pressure, (2) fiscal constraints, and (3) program ineffectiveness. My colleagues and I use this as a basis to examine cities’ decisions to end their affiliation with ICLEI and abandon the explicit climate protection objectives associated with it.

In the US, the issue of climate change is entrenched in partisan conflict. However, until recently, opposition was aimed at Federal policies and had little impact on local initiatives. With the rise of the Tea Party movement, political opposition began to trickle down to municipal governments and activist groups started targeting local sustainability and climate protection efforts. ICLEI, which was originally associated with the United Nations and the international sustainability agreement known as Agenda 21, has become a primary target. An excerpt from a flyer from the group “Democrats Against UN Agenda 21” is representative of common complaints: “Using ICLEI greenhouse gas emissions goals, your local government is in the process of controlling where and how you live, what you eat, what your children learn, and what laws you will live under. With the cover of ‘environmental concern’ your personal rights are being restricted . . .” Even though the propaganda is often steeped in conspiracy theory, the anti-ICLEI movement has successfully influenced some cities’ policy decisions.

The recent economic downturn had detrimental effects on cities’ finances and may have influenced their decisions to abandon policy commitments. The 2009 American Reinvestment and Recovery Act (ARRA) funneled almost $800 billion in stimulus money to local governments, including $3.2 billion in the form of Energy Efficiency Conservation Block Grants (EECBG). EECBG funds allowed municipalities to pursue a variety of projects related to local energy and sustainability goals. However, as these funds ran out, some cities began to abandon their efforts.

Finally, conventional wisdom suggests that programs that are ineffective are more likely to be abandoned. ICLEI’s specific milestone-based approach for GHG emission reduction likely fit the needs and abilities of some communities better than others, leading to differences in the program’s effectiveness across cities. A notable portion of ICLEI city members never completed any of its specified milestones, even after several years of participation.

We tested the influence of these three explanations on the 526 US cities that had been members of ICLEI at any point between 2007 and 2012 and have populations over 10,000. Our results show that, in the municipal climate protection context, political ideology and programmatic effectiveness are related to termination, whereas financial conditions do not play a meaningful role.

Interestingly, it is mainstream political conservativism, rather than Tea Party ideology, that seems to affect cities’ decisions to end climate protection efforts. Cities where electoral support for the 2012 Republican presidential candidate was higher were more likely to have terminated their ICLEI memberships, all else equal. On the other hand, despite its fervor, Tea Party opposition did not appear to have a meaningful effect on government action. Municipalities with active Tea Party groups were no more likely to withdraw from ICLEI than those with less active groups. Additionally, we find that with every milestone achieved, a city is 4 percent more likely to continue the program. Therefore, a city that has gone through the entire ICLEI process for both their governmental operations and the larger community is almost 40 percent less likely to terminate its membership compared to an otherwise similar city that has not completed any milestones.

Although ending membership in ICLEI does not necessarily imply the end of all GHG mitigation efforts, it does represent a meaningful departure from the comprehensive climate planning process it prescribes and assists with. To proponents of sustainability, cities’ abandonment of ICLEI may look like a back-slide. However, some of our more recent, not yet published, work finds that this mass withdrawal has had little effect on the number and type of actions that cities implement. In fact, between 2010 and 2014, most cities increased their climate, energy, and sustainability initiatives – and the cities that withdrew from ICLEI did so at similar rates to those that maintained their membership.  From this perspective, ICLEI’s main impact may have been at the front end of the local climate protection movement in helping spread awareness about the role that cities can play in reducing GHG emissions.

This article is based on the paper, ‘Applying Policy Termination Theory to the Abandonment of Climate Protection Initiatives by U.S. Local Governments’ in the Policy Studies Journal.

Rachel M. Krause – University of Kansas
Rachel M. Krause is an assistant professor at the University of Kansas’s School of Public Affairs and Administration. Her research focuses on municipal climate protection, urban sustainability, and the adoption and diffusion of innovative environmental policies and technologies. She is involved in the development of the Integrated City Sustainability Database (ICSD) and authored the article “Applying Policy Termination Theory to the Abandonment of Climate Protection Initiatives by U.S. Local Governments” with Hongtao Yi and Richard Feiock, which is published in the Policy Studies Journal.