Many crimes are committed by more than one offender, meaning that viewing an individual offender as a unit of analysis to understand crime does not tell the whole story. In new research, Brendan Lantz uses ten years of burglary offending data to examine how offender ties impact individual behavior. He finds that co-offender groups vary in their connectedness, that these connections significantly impact the likelihood of offending, and the impact of an arrest on offending depends on whether or not it is the instigator of a crime being arrested.

If two offenders commit an offense together, they are both part of a network of co-offenders.  If one of those offenders goes on to commit another offense with a different offender, the co-offender network grows.  Similar to relationships in conventional life, connections to other offenders shape criminal behavior. All too often, however, we consider the individual offender in a vacuum, giving too little consideration to the ways that co-offenders and accomplices may shape behavior. It’s time that we start to consider the criminal offender in a social context.

Using the individual offender as a unit of analysis may be a convenient way to simplify our research, but this narrow view also does not tell the whole story.  The best way to understand the individual offender may be through the examination of their co-offenders.  In new research, my coauthor and I analyzed a decade of burglary co-offending network data in order to examine the ways in which offender ties impact individual behavior.  Four important findings emerged.

Large, loose co-offender groups, like the group shown, are more difficult to disrupt because the average offender within these groups is “replaceable”.  Because of the structure of these groups, the arrest of a single offender may not actually reduce offending. 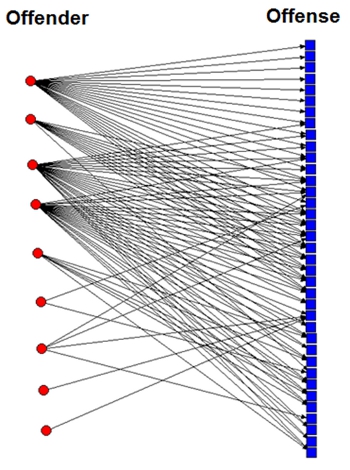 Second, membership in a co-offending group significantly impacts offending.  Those offenders who are connected to other offenders commit roughly 70 percent more offenses and have longer criminal careers than offenders without ties to other burglars.  Group size, however, is an even more important predictor of individual offending.  As co-offender group size increases, individual group members are at an increased risk for committing more offenses, and over a longer period of time.

Third, burglary offenders play different roles in these co-offending groups.  Burglary offenders can generally be separated into two different categories of offenders: instigators and joiners.  An instigating offender is typically conceptualized as a high rate offender who offends with several different offenders, often prodding them along.  Other, less influential offenders are labeled joiners.  Figure 2 compares instigators to these other co-offenders.  Instigators commit more offenses, spend more time in prison, start their burglary career at a younger age, and partner with a greater number of co-offenders. 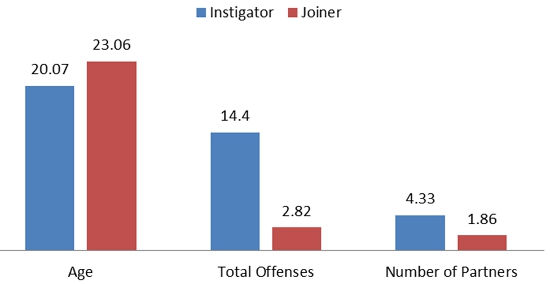 Finally, and related to point three, the impact of an arrest on offending varies according to who is being arrested.  When an instigator is arrested, the co-offenders connected to the arrestee are more likely to stop as well.  If a non-instigator is arrested, however, the actual arrest may have little or no actual effect on the number of offenses that are being committed.  Essentially, an arrest does not always lead to a change in offense counts.

So what does all this mean?  Speaking broadly, when examining offending patterns, it is important to consider the social context within which offenders operate.  More specifically, there are at least two important takeaway findings from these results.  First, connections to criminals impact individuals in the same way that connections to non-criminals do: by changing behavior.  Those connected to other offenders commit more offenses, for a longer period of time, and with increased frequency.

Second, these results offer some hope for law enforcement.  Every single co-offender does not have to be arrested in order to significantly decrease offending rates.  The current research uses betweenness centrality, a social network measure based on positioning within groups, to identify the most important arrest targets.  Unfortunately, this measure may be too abstract to readily translate into police efforts, but the research does suggest that we can use targeted policing strategies to effectively reduce offending.  Crime control is not a zero-sum game.  Police resources (and prosecution efforts) may be used most effectively when they are aimed at the most serious co-offenders, rather than at all the involved co-offenders.  Because leaders control and direct the flow of resources within a group, the group suffers disproportionately upon the loss of a leader.

By studying offenders within a network context we can better understand patterns of offending behavior and, perhaps more importantly, improve our understanding of how to disrupt and stop offending patterns, even without arresting every offender involved in an offense.  In an era of limited resources, smart policing can stop multiple offenders with a single arrest.

This article is based on the paper “Co-Offender Ties and the Criminal Career” in the Journal of Research in Crime & Delinquency.