Inmates over 50 are the fastest growing population in federal and state prisons, leading to an increased need for, and cost of, prison healthcare services. But what is driving this aging prison population? In new research, Jeremy Luallen finds that rather than harsh sentencing regimes, a significant portion of this ‘graying’ of the prison population is linked to the Baby Boomer-related aging of the general population. They write that in light of the importance of this inescapable demographic change on prison populations, states should focus their efforts on reducing inmate and healthcare costs and ensure any new policies have sunset provisions.

There is no doubt that the “graying” of America’s prisons over the last several decades has become a serious concern for corrections agencies.  Not only are inmates over the age of 50 the fastest growing population in federal and state prisons, they have an increased need for healthcare services that makes them more costly overall.  In fact, one report estimates that as much as $16 billion dollars is spent in the U.S. each year to house and care for older prisoners.

In recognition of this problem, states are considering policies to help mitigate costs, including outsourcing healthcare services, expanding the use of telemedicine, strengthening re-entry programs for older inmates, etc.  At the same time, an incomplete picture of the forces driving this growth makes it difficult to form optimal policy responses.

One common explanation for the change is that harsh sentencing laws have caused a build-up of older prisoners over time.  That explanation is certainly true for a subset of older inmates; however, it is also true that an estimated 72 percent of inmates incarcerated in 2011 and over the age of 50 have been admitted to prison since 2000.  For them, this explanation makes less sense.

Alternatively, new research is now showing that a significant explanation is the rising age of admission to prison.  Data from the National Corrections Reporting Program (NCRP) show that the average admission age has increased by 14 months (from 33 years old to 34.2 years old) in 17 sample states examined between 2000 and 2011.

Although the causes of this rising admission age are not yet well understood, one possible explanation is that the aging baby boom population is causing the number of older offenders entering prison to swell.  Consider this explanation in the context of Figure 1 below.  Data for this figure come from the NCRP and from the Census Bureau.  This figure shows the average annual growth of the prison population (the boxes) contrasted against the same growth for the general population (the dashes) in 17 sample states.  The pattern is striking insofar as there is an obvious, general concordance between the growth rates (on the y-axis) of these two populations broken down by age group (on the x-axis).

In an analysis using the NCRP data, we investigate this relationship more closely using the simulation methodology of Luallen and Kling (2014).  Specifically, we estimate the numbers and ages of prisoners incarcerated in 2011, based on observed trends in (general) population aging since 2000 and holding constant all other factors affecting prison admissions since 2000, i.e., rate of incarceration, distribution of convicted offenses, etc.  We compare these totals to similar predictions where no changes are introduced after 2000 (i.e. called the “steady state”) including changes to population age.  The difference in predictions represents the impact of population aging.  By comparing changes under population aging to changes observed in reality (also relative to the steady state), we get a representation of how much population aging explains actual changes.

The results of the simulations are provocative.  Figure 2 below shows that the correspondence of changes between observed conditions (the solid bars) and simulated conditions (the patterned bars) in the estimated number of prisoners (on the y-axis) is surprisingly high in most cases.  For the youngest age groups, 20 – 29, population aging explains little; other factors appear to dominate the obvious downward pressure on prison growth.  However, for older age groups, and for the baby boom birth cohort in particular, population aging alone contributes a sizeable increase to the predicted population.  For offenders between the ages of 50 and 64, the overall simulated impact of population aging is 27 percent of the observed change, ranging between 19 percent and 52 percent depending on the age group.

The magnitudes of the impacts shown in Figure 2 represent a significant departure from the prevailing wisdom.  Though some research does acknowledge that age structures can play a minor role in shaping offender age distributions in some cases, population aging overall is typically portrayed in the literature as having little power to explain age compositions of prisons.  Figure 2 effectively demonstrates the counterargument.

This is not to say that assertions to date have been entirely incorrect.  Instead, it seems that studies have simply failed to uncover an important dimension of change, i.e., that demographic changes impact older prison populations.  This fact is not surprising since young offenders are the primary class of prisoners and are usually the focus of corrections-based research.

By contrast, older prisoners appear to be more sensitive to large socio-demographic changes.  This may be because older offenders are less affected by criminal justice policies and practices which have powerful effects on younger inmate populations.  For example, it is hard to envision how changes to policies related to drug courts, gang violence and domestic violence would affect the flow of older offenders into prison.  These dimensions of criminal justice usual deal with young offending populations.

The strength of association between population aging and older inmate populations implies that major demographic events like the baby boom play a significant role in shaping prison populations.  It also suggests important lessons for the future.  First, the current trend is in part a natural artifact of history.  In that sense, its consequences are “inescapable”.  It suggests that because individual states can do little to change macro trends in aging, focusing efforts on reducing overall inmate costs and health care costs may be a first-best solution.

Second, to the extent that growth is a byproduct of the baby boom phenomenon, mounting fiscal pressures should begin to reverse as trends in demography also reverse.  This is an imperfect argument however; the future costs of health care are entirely uncertain and the continued growth of older inmates in prisons will not end for many years, though their impact on the margin diminishes with every passing year.

Third, although population aging is an important factor, there remain other important explanations.  Are social or economic forces causing patterns of illegal behavior to change? Are sentencing policies affecting older offenders less forgiving than they used to be?  Are enforcement strategies or revocation practices changing?  Such explanations may be unrelated to population structure, but are meaningful for understanding the potential impacts of policy responses.

Finally, states should be mindful that “permanent” policy changes meant to reduce the inflow and increase the outflow of older inmates will persist even as this problem naturally subsides with the passing of this birth cohort.  A negative consequence may be that the proverbial pendulum swings too far in the other direction and unintended consequences emerge in the long run.  To avoid this, states should consider integrating sunset provisions with new policies meant to address this problem.

This article is based on the paper, ‘The Growth of Older Inmate Populations: How Population Aging Explains Rising Age at Admission’, in the Journal of Gerontology: Social Sciences.

Jeremy Luallen – Abt Associates
Dr. Luallen is an economist with Abt Associates Inc., a public policy consulting firm in Cambridge, MA, and is a faculty member at Tufts University.  He specializes in quantitative research and policy analysis, including research in criminal justice.  His latest research focuses issues related to prison populations and prison population growth and has also been featured in the Wall Street Journal. 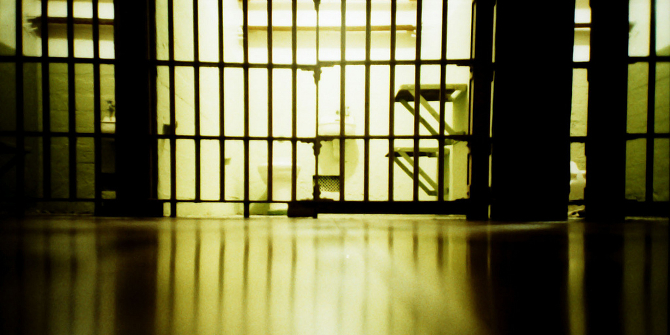