This widespread legalization drove a persistent decline in crime of approximately 3-5 percent, equivalent to 120,000-180,000 fewer crimes committed each year across the nation, primary due to a large fall in property crimes. This decline cannot be explained by pre-existing trends, economic conditions, declines in drug crimes, changes to police forces and prison populations, or other common explanations of changes in crime rates during this period.

Looking more deeply into prior literature and examining surveys conducted on the legalized IRCA applicants, I find strong evidence that the decline in crime was caused by enhanced levels of human capital and greater labor market opportunities resulting from becoming legal residents.

For information about the actual legalizations that took place, I use Legalization Summary Tapes created by the Immigration and Naturalization Service (INS). This database allows me to quantify the number and the demographics of the IRCA applicants in each county in the United States as well as their application and legalization dates. Overall, the mean ratio of IRCA applicants to county population is approximately 0.9 percent, with individual county values ranging from 0 percent to over 20 percent. I also utilize the FBI’s annual Uniform Crime Reports (UCR) from 1980-2000. These data are assembled annually at a country level using a standardized methodology across the country and give detailed information about the numbers and types of crime committed.

The application review process of the IRCA was one of the largest bureaucratic undertakings ever attempted by the INS up to that time. Setting up over 100 `legalization offices’, the INS sent paperwork around the country in order to distribute work. The unfamiliarity of the INS with the massive undertaking, as well as the underestimate of the number of applicants, meant the INS was overwhelmed and the application approval process took much longer for some applicants than others. In essence, it meant that if two identical IRCA applicants applied in mid-1987, one might be legalized by the end of 1987 while the other was left without legal status for up to 3 additional years.

I exploit this quasi-random variation in the timing and geographical variation of legalizations in order to examine the link between increasing legalizations and changes in crimes committed in each county. I use a cumulative measure of the legalized population in each county and compare to annualized crime per capita. Figure 1 gives an example of the cumulative fraction of legalized IRCA applicants per capita in Santa Clara County over time. The fraction starts at zero, rapidly increases during the years of legalization, and then declines as the county population continues to grow over time after all legalizations have occurred. 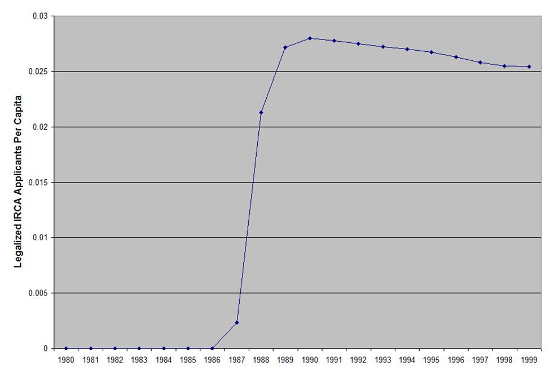 Regressing logged crime per capita on the cumulative number of county-level IRCA legalizations per capita, I find an approximate 4.5 percent decline in crime associated with 1 percent of a county’s population being legalized. I find significantly smaller effects for violent crimes and larger effects when restricting to property crimes.

Applicants to the 1986 IRCA were surveyed in two waves in 1987 and 1992. Among other questions, they were asked about how legalization impacted their decisions to pursue education, English language fluency, and additional labor market responsibility and higher wages. The vast majority of applicants reported that legalization improved their labor market prospects and led to increases in education and language skills. These responses indicate a strong role of legal residency in strengthening labor market status and human capital, concurring with previous literature on the subject.

To more formally explain the role that great labor market access played in linking legalization and crime, I construct a model of the labor market relating shifts in labor market opportunity with changes in rates of crime. Agents in this model endogenously shift time spent in different sectors (e.g. formal sector work, lower-paying informal sector work, job search, and crime) as labor market characteristics change. In this model, the level of crime is equal to the total proportion of time allocated to the crime sector throughout the economy relative to the total amount of time available. The key mechanism is that immigrants are only able to access the formal (and higher-paying) sector following their legalization, decreasing the motivation to commit crimes for economic gain.

Calibrating to real-world parameters like wage rates and unemployment rates, this model predicts that levels of crime would drop by approximately 3.25 percent over the years following the IRCA’s legalization program. As applicants’ wage and labor market access grew, time in the crime sector falls and applicants gradually shift more time into the formal sector.

Figure 2 displays a comparison of the model’s predicted changes in crime and the empirically observed declines associated with IRCA applicant legalizations. The model’s data display the decline in the fraction of time spent in the crime sector across all members in the simulated economy. The empirical data represent the estimated contribution of the IRCA applicant population to crime in a given county over time. That is, in a county that had 1 percent of its population consisting of IRCA applicants, the empirically observed amount of crime in a county tended to fall precisely during the years in which legalization occurred. This time-profile is consistent with a causal negative impact of legalization on crime and also with the gradual transition of IRCA applicants into the labor force, substituting away from criminal activities. 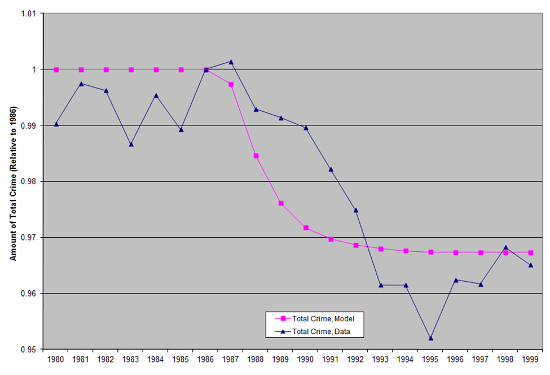 Undocumented immigration has been, and will remain, an important topic in American politics and around the globe. One common method of dealing with undocumented immigration is a general or targeted amnesty program. I find that the implications of this amnesty program on the commission of crime are large, with estimated declines in crime of approximately 3 percent-5 percent for each 1 percent of the population being legalized in the United States. This decline is higher for property crime than for violent crime, consistent with greater access to the formal labor market being a primary cause of the decline in crime.

This article is based on the paper, ‘Effects of Immigrant Legalization on Crime’, in the American Economic Review: Papers & Proceedings 2015.

Scott R. Baker – Northwestern University
Scott Ross Baker is an Assistant Professor of Finance in the Kellogg School of Management at Northwestern University. His research is concentrated in empirical finance and macroeconomics. Recent work examines the impact of household leverage and credit constraints in driving sensitivity to both income and asset shocks.