Lobbying has become a pervasive part of American politics with hundreds of organizations lobbying bills across thousands of issues. But, write Simon F. Haeder and Susan Webb Yackee, legislative lobbying is only half the story. In new research, they look at the lobbying of federal rulemaking agencies, such as the President’s Office of Information and Regulatory Affairs (OIRA). They find that despite a lack of media coverage, intense lobbying of OIRA occurs, as evidenced by the often substantive changes in OIRA’s final rules compared to the draft rules submitted for review.

Lobbying is ubiquitous in American politics. Not surprisingly, the popular media and scholarly journals provide extensive accounts of the activities of lobbyists. Often, the tone of these accounts is markedly negative: lobbying is described—and perceived as—secretive, anti-democratic, elitist, and, perhaps, even anti-American. Indeed, a few years back, lobbyists ranked even lower than Members of Congress on Gallup’s Honesty and Ethics List.

The Affordable Care Act nicely illustrates this point. According the non-profit, non-partisan Center for Responsive Politics’ Open Secret database, the Affordable Care Act (ACA) was one of the most lobbied bills in the past decade. More than 1,250 organizations registered to lobby on the bill on more than 5,000 specific issues. Organizations ranged from industry giants like Blue Cross/Blue Shield and the American Hospital Association to the Iraq & Afghanistan Veterans of America and the Knights of Columbus. Still vivid are the pictures of industry representatives meeting with the President at the White House.

Lobbying activity has hardly receded since the passage of the ACA as, for example, medical devicemakers and unions seek to statutorily alter components of the law. Others lobby to completely repeal it. However, these commonly-known accounts tell only half the story. 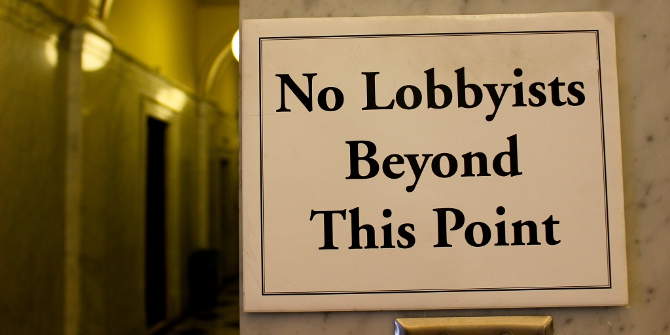 In the modern administrative state, agency officials often make critical policy decisions—including designing legally binding regulations.  Indeed, since the 1960s, a significant shift has occurred from statutory to regulatory policymaking. Federal agencies annually develop and promulgate hundreds of legally binding regulations through a process called “rulemaking.”  These regulations are often described as “filling in the gaps” of legislative statutes, but they also resolve highly controversial questions of public policy.  And lobbyists have not sat by idly. Today, they lobby all federal rulemaking agencies extensively. Indeed, some of them also target a small, albeit important, agency called the President’s Office of Information and Regulatory Affairs (OIRA).

Why would interest groups lobby OIRA? Most rulemaking formally begins when agencies publish a “Notice of Proposed Rulemaking” (NPRM) that solicits public comments.  After “considering” those comments, the agency may then promulgate a legally binding “Final Rule.”  In this process, OIRA—which is a relatively obscure office in the White House—is charged with reviewing most government agency regulations, including those issued by agencies and departments like the Centers for Medicare & Medicaid (CMS) and the Department of Health and Human Services, before they are finalized as law.  This office is also authorized to return these proposals with “suggested policy changes,” so that an agency can modify rules to better accord with “Presidential priorities” and other goals.  Most observers of the regulatory process believe that agencies change the content of rules to reflect OIRA’s—and presumably the President’s—preferences.

This degree of policymaking power is not lost on interest groups lobbyists — particularly the most savvy and sophisticated ones. Indeed, hundreds of groups have held lobbying meetings with OIRA officials about ACA regulations, including those on Essential Health Benefits, insurance marketplaces, medical loss ratios, and qualified health plans.

At the same time, these lobbying activities have been strikingly absent from most media accounts. Indeed, a quick Google news search only turned up only a small handful of articles about OIRA lobbying with regard to rail safety and Silica dust. Not surprisingly, while there are hundreds of journalists covering legislative activities very few – if any – exclusively cover regulatory affairs. However, scholars have not done much better. While legal scholars have vigorously debated the merits of the OIRA review process, they have largely failed to subject their normative claims to empirical testing.

Yet, while scholars and practitioners alike know remarkably little about lobbying at OIRA, our recent research suggests just how pivotal this stage of regulatory policymaking may be.  Our research studies all regulations reviewed by OIRA from January 2005 through June 2011. We find—using plagiarism software, similar to what a college professor might use to check for violations across student papers—that the (1) draft Final Rules that agencies submit to OIRA for review and (2) the Final Rules promulgated after OIRA’s “suggested changes” often differ substantively.  We also show that interest group lobbying—particular business advocacy—is associated with a greater degree of policy change during OIRA’s Final Rule review.

The fact that intense lobbying occurs on controversial regulations is no surprise.  Yet, scholars, practitioners, and perhaps, most importantly, those federal judges—tasked with overseeing the regulatory process—tend to focus their attention on the relatively transparent and open “notice and comment” process used by agencies to promulgate most rules.  Our research suggests a clear need to expand that focus to the OIRA/Presidential review process for agency regulations.

This article is based on the paper, ‘Influence and the Administrative Process: Lobbying the U.S. President’s Office of Management and Budget’, in American Political Science Review.

Simon F. Haeder – University of Wisconsin-Madison
Simon F. Haeder is a Ph.D. candidate in Political Science at the University of Wisconsin-Madison. His teaching and research interests include the public policymaking process, regulatory politics, lobbying and interest group politics, and healthcare policy. His most recent work has been published in the American Political Science Review, Health Affairs, the Journal of the American Medical Association, and the Journal of Health Politics, Policy and Law.