Children’s success at school helps to lay the groundwork for career and personal success; the continued underperformance of disadvantaged and racial minority students is therefore of great concern to policymakers. In new research using data from a longitudinal child development survey in Quebec, Caroline Fitzpatrick and her co-authors found that race and appearance contribute to academic adjustment problems regardless of how academically talented students are, and that this may at least partially stem from conflict with, and lack of support from, their teachers.

For most of us, childhood academic success lays the groundwork for later personal and workplace success, psychological well-being, and lifelong health. Unfortunately, disadvantaged and racial minority students continue to underperform in school relative to their white and more affluent peers. An important goal of state-funded education and social policy is therefore to help reduce socio-economically based disparities in achievement. Interventions that seek to improve academic competence in disadvantaged children have shown great promise in reducing these gaps.  Nevertheless, they do not seem to explain the entire magnitude of socioeconomically-based disparities in achievement. This suggests that other factors unrelated to student academic competence may be contributing to learning outcomes.

Our research conducted with a sample of elementary school children suggests that race and appearance contribute to academic adjustment problems regardless of how academically talented students are. More specifically, we found that ethnic minority students as well as those showing visible signs of disadvantage were more likely to report conflict and less supportive relations with teachers. Our results were not confounded by parental income, education, or occupational prestige, nor where they explained by child academic ability and behavior in the classroom.

We analyzed information from 1,311 children followed as part of the Quebec Longitudinal Study of Child Development. Students were categorized as White or as visible minorities (Black or Native Canadian). Fourth grade teachers reported student appearance (e.g., appearing hungry or tired, being poorly dressed). Students self-reported how they felt about their relationship with their teacher (e.g., your teacher congratulates you when you do well in something; You like your teacher; You can talk to your teacher, he/she listens and answers nicely). Student’s previous kindergarten teachers provided reports of classroom behavior. Furthermore, student academic competence was also assessed through a standard achievement test. Families were interviewed to obtain family socioeconomic status as well as the quality of family interactions.

How well students get along with teachers can have important repercussions on their academic and work futures. A warm and supportive relationship with teachers can promote the healthy development of children who experience more conflict and more chaotic family environments. Furthermore, for many children, teachers represent a first encounter with an adult authority figure in a social institution outside of their more informal relations in the home. As a result, if this initial experience is conflictual and unsupportive, students my come to view themselves more negatively in larger society. Such negative encounters may also influence student mental models and expectations when interacting with authority figures in future.

The idea that appearance may influence our relationships with others is not new. Research with adults has found that appearance matters in decisions to hire, promotions, and general judgements of competence. Individuals are also inclined to automatically assess social status in others from their physical appearance and demeanor. Others perceived as lower status or disadvantaged are then likely to be stereotyped as less competent and less talented.  Such perceptions can then influence important life outcomes for stereotyped individuals by influencing how others behave towards them and the opportunities they are afforded. 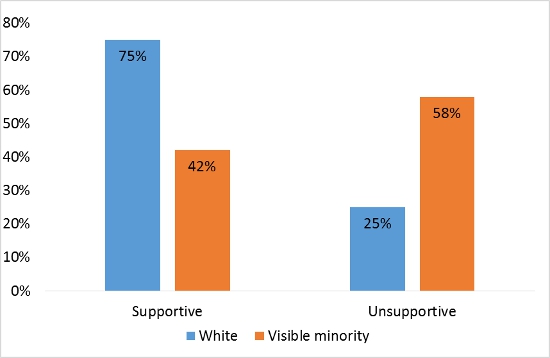 Around the age of 8 most children become aware of the existence of stereotypes. Students learn that some social groups are perceived more favorably than others. These perceptions can then have a negative influence on student achievement through something know has stereotype threat, a phenomenon whereby anxiety of confirming negative stereotypes of one’s group hinders performance. Much less work has addressed the importance of child appearance in the classroom. However, our results suggest that appearance is likely to matter as early as grade school.

Our results should be interpreted in the context of certain limitations. For one, it was not possible to examine how other visible minority statuses (Asian, Hispanic) might also influence teacher-child relationships in the classroom. Furthermore, it was not possible to assess if teacher ethnicity has an influence on their interaction with visible and non-visible minority students. Finally, the present results are correlational.  Therefore causal conclusions would not be appropriate.

A recent large scale survey suggests that visible minority students are more likely to be criminalized (suspension, police referral) for bad behavior. In contrast, White students were much more likely to be medicalized (referred to health care professional) for similar offenses. Our results help us better understand how negative stereotypes may also play into what researchers have named the school-to-prison pipeline. This is a phenomena whereby visible minority students experience disciplinary practices in schools which increase their likelihood of eventually ending up in the criminal justice system.

The pervasiveness of media, both off and online, that all individuals are bombarded with negative stereotypical messages of stigmatized social groups. Taking explicit steps to reduce negative social stereotypes in the elementary school classroom, through on-going teacher training and workshops may help overturn the gradual process of school disengagement observed in many disadvantaged and ethnic minority students.  Teachers can overtly address prejudice and discrimination in the context of group discussions. Furthermore, addressing such topics by inviting members of socially stigmatized groups to present their experiences to the classroom may be especially effective. Teachers can also ask students to complete activities in which they are asked to think about people on the basis of their internal characteristics rather than physical appearance. Finally, putting in place policies that encourage schools to form committees of teachers and professionals tasked with discussing and monitoring the progress of students belonging to stigmatized social groups may help reduce educational disparities in learning.

In many countries, low birth rates, rising immigration, and a growing gap between the rich and poor increase the odds that teachers will face increasingly diverse and disadvantaged students. As such, developing a better understanding of how social perceptions influence child well-being, achievement, and relationships with teachers can help improve academic outcomes across the population. Our results suggest that academic interventions based solely on curriculum change may not be sufficient for promoting equality in learning opportunities. Rather holistic interventions that target relationship quality with teachers and the influence of negative stereotypes in the classroom may be the most effective strategies for reducing well established educational disparities between advantaged and disadvantaged children.

This article is based on the paper ‘I Don’t Think You Like Me Very Much: Child Minority Status and Disadvantage Predict Relationship Quality With Teachers’, co-authored with Carolyn Coté-Lussier, Clancy Blair, and Linda Pagani, in Youth & Society.

Caroline Fitzpatrick – Université Sainte-Anne, Canada.
Caroline Fitzpatrick, is an assistant professor at Sainte-Anne’s University of Nova Scotia where she teaches psychology and statistics. She is also an affiliate researcher at Concordia University’s PERFORM Center and an appointed research fellow at the University of Johannesburg, in the department of childhood education. Her work addresses the childhood origins of education and health inequities and has the ultimate goal of informing social policies and public health initiatives aimed at improving child physical and mental health internationally.