Two of the most resource-rich states in the US, Wyoming and Alaska, lack an income tax and also spend more per resident than any other. In new research, Alex James examines whether low tax rates and high spending are linked to states having large amounts of natural resources. He finds that when resource prices rise, state governments lower tax rates but do not tend to increase public expenditure, and that they decrease public expenditures when resource prices fall.

Of the seven U.S. states that currently do not have an individual income tax, three (Wyoming, Alaska and Texas) are resource rich. Surprisingly, in 2008 state government spending per resident was greater in Wyoming and Alaska than in any other state. In fact, per resident, spending in Alaska was greater than that in California and Massachusetts, combined. Are low tax rates and high spending rates a result of natural-resource endowments? The answer to this question has important policy implications and is particularly relevant to both the development literature and the ongoing debate over the so-called “tax-expenditure nexus”.

Milton Friedman famously argued that the only way to shrink the size of government is to “starve the beast” by decreasing tax revenue. Specifically, he argued that:

Government will spend whatever the tax system will raise plus a good deal more. Every step we take to strengthen the tax system, whether by getting people to accept payroll taxes they otherwise would not accept, or by cooperating in enacting higher income taxes and excise taxes or whatnot, fosters a higher level of government spending.

The baseline estimation procedure uses a panel of U.S. state data, including the continental U.S. states from 1958 to 2008. The estimation relies on variation within states, not across ones. This is important, as there are clearly many important differences between the states of, for example, Wyoming and New Hampshire – only one of which being that Wyoming is rich with hydrocarbons and New Hampshire is not.

The main explanatory variable is resource-revenue – revenue generated from a severance tax, rents and royalties – expressed relative to state GDP. The extraction of natural resources may depend on state-specific environmental policies, tax rates and leasing agreements. This is problematic as a state government may, for example, incentivize additional oil drilling in an effort to finance additional expenditures. In this case, it would not be the additional revenue that caused additional government expenditures, but rather a third and unobserved variable that caused both resource-based revenue and expenditures to rise. In light of this, endowments of oil and gas – defined as the volume of oil and gas deposits (estimated in 1999) interacted with annual energy prices – is used to proxy for resource-based government revenue. This way, within state (but across time) variation in resource-based revenue is defined by variation in energy prices, which are determined by international factors, and are largely unbiased by state-specific outcomes. 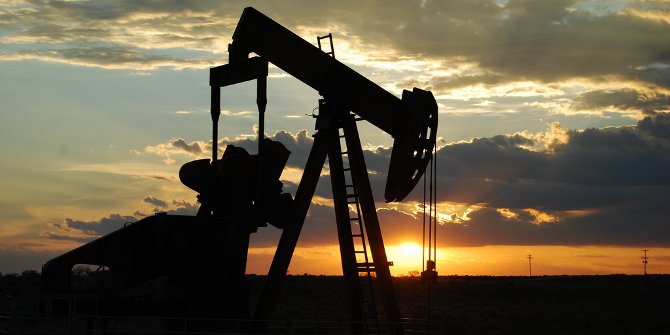 Aside from the specific point estimates there are more general conclusions that should be considered. First, do governments “spend whatever the tax system will raise” as Friedman famously claimed? The answer turns out to be “perhaps not”. Further, natural resources, long believed to “curse” economic growth (see for example Jeffery Sach’s and Andrew Warner’s seminal work), may positively affect growth by reducing distortionary taxes, like the income tax.

It’s also important to understand that the state government of Wyoming, for example, did not eliminate income tax revenue from its budget. Rather, it substituted for it by taxing the extraction of hydrocarbons. Governments of neighboring states that were not blessed with such rich natural resources, such as that of Nebraska, are not well positioned to emulate the fiscal structure of a state like Wyoming (as the Governor of Nebraska, Dave Heineman recently proposed to do)—and they shouldn’t try.

Finally, a surprising feature of this research is the observed disconnect between the stated political preferences of the residents of resource-rich states and reality. Alaska, Texas and North Dakota are often considered to be three of the most “free” or “libertarian” states in the Union (see for example Freedom In the 50 States) and opinion surveys echo this result. However, such indices usually ignore the tax burden placed on the energy sector (and in my experience from living in Alaska and Wyoming, constituents do as well). A more comprehensive measure of government size, perhaps one that considers the role of public spending – or at least the tax revenue generated from the energy sector – would make Alaska and Wyoming look more like Sweden than the libertarian meccas they claim to be. This raises the interesting prospect that political preferences ultimately depend on (among other things) natural-resource endowments that relieve constituents of the burden of taxes while simultaneously shielding them from the hardships that usually accompany the insufficient provision of public goods.

This article is based on the paper ‘US State Fiscal Policy and Natural Resources’, in the American Economic Journal: Economic Policy.