Is lobbying worth it? In new research, Karam Kang studies the effects of the more than $3 billion spent by firms and trade associations on lobbyists to influence policy making. She finds that while lobbying is only associated with a 0.05 percent greater chance that a desired policy becomes law, the monetary returns of even such a small change can be worth millions.

Every year individuals, firms, and trade associations spend more than $3 billion to hire professional lobbyists to influence policy-making in the United States. Not all groups or individuals, however, can afford the high price tag of well-connected lobbyists. This inequality in political influence by private interests represents a potential threat to democratic society, since it provides a mechanism for the transmission of economic inequality into political inequality. This raises the question: To what extent does lobbying influence public policy?

The very existence of lobbyists and their multi-million dollar firms on K Street in Washington suggests that lobbying has a large effect on public policy. Anecdotal evidence, as reported in the media, seems to confirm the impact of lobbying on policy. However, the demand for lobbyists could still be high even if the effects were very small. First, if an interest group finds a proposed policy to be of tremendous value when it is enacted into law, even if the ex-post effects of lobbying on enactment were rather small, it might still be worth spending large sums of money to influence the outcome. Second, when a policy benefits certain groups at the expense of others, lobbying efforts are often exerted on both sides: the supporters as well as the opponents. Lobbying may well be a zero-sum game, where the resulting public policy is scarcely affected by spending.

In recent research, I show that these two explanations can rationalize the lobbying behaviors for energy policies considered during the last Congress of the Bush administration (the 110th Congress, 2007–8). During this period, climate change legislation received notable attention from the Senate, and the historic financial industry bailout bill was enacted with a large subsidy package for the energy industry. I identified 538 energy policies that were introduced as part of 445 pieces of legislation. Using the lobbying reports mandated by the Lobbying Disclosure Act of 1995, I collected information on the lobbying activities of major energy firms and trade associations.

The unit of analysis is that of a policy, not an entire bill, where a policy is defined as a part of a bill that addresses one unique issue. The old adage about laws being like sausages, often attributed to Otto von Bismarck, evocatively describes why the unit of analysis should be an individual policy. A bill usually contains multiple policies, which may or may not be related to each other; and the same policy may appear in multiple bills. For example, the American Energy Act of 2008 contained several different policies, such as one allowing natural gas production on the outer Continental Shelf and one extending the solar energy property tax credit. The bill failed, but the solar energy tax provision was later inserted into the financial industry bailout bill, which was enacted. In constructing the data, I track each policy’s movement through bills to accurately measure the outcome of lobbying.

By estimating a game-theoretic model of lobbying based on this data, I find that the average difference between the probability that a policy becomes law with and without lobbying is statistically significant but small in magnitude: only 0.05 percentage points. This finding is the result of two effects. First, the effect of lobbying expenditures on the policy enactment probability is very small. For example, based on the estimation, it would cost $3 million or more for one lobbying group to change a policy’s enactment probability by 1.2 percentage points if no other groups also lobbied. Second, the effects of expenditures by both supporting and opposing lobbies partially cancel each other out.

Nonetheless, although the effect of lobbying expenditures on the policy enactment probability is very small even without the canceling-out effect, the average returns to lobbying expenditures are estimated to be 137–152 percent. Because the value of a policy is very large, even a small change in its enactment probability can lead to large private returns.  For example, the estimated total value of the policies in the analysis to major oil companies is over $400 billion, while these companies collectively spent $160 million during the period.

These findings do not, however, necessarily imply that the policymaking outcomes would be more or less unchanged should lobbying be completely banned. Some lobbying activities could be directed towards shaping the pool of policies to be discussed by Congress. The mere presence of these interest groups in Washington, which are often well-equipped with other political instruments such as public advertising and grassroots mobilization, might also deter certain policies from being added to the Congressional agenda. Investigating the effects of lobbying on shaping the content of legislation is an important topic for future research.

This article is based on the paper, ‘Policy Influence and Private Returns from Lobbying in the Energy Sector’, in The Review of Economic Studies. 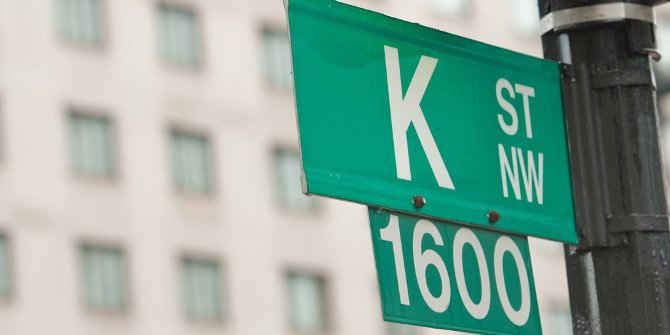