With Hillary Clinton in striking distance of the presidency and Janet Yellen in charge of the Federal Reserve, some might be tempted to say that sexism in the American political landscape is over. In new research, Cecilia Hyunjung Mo finds that among voters, sexism is alive and well, in the form of implicit bias against female candidates. She writes that despite people’s statements of equality, many still have difficulty associating women with leadership attributes, and are therefore less likely to vote for women during elections.

At first glance, overt sexism in politics would appear to be an artifact of the past. George Gallup asked in his 1936 poll: “If your party nominated a woman for president, would you vote for her if she were qualified for the job?” Only 30 percent of the American public said they would. Over the next several decades, as sexism became less acceptable, the population that would vote for a qualified female for President steadily increased.  By the late ’90s, nearly 100 percent of Americans expressed a willingness to have a woman in the highest office in the country.

With Hillary Clinton making a viable run for President today, Janet Yellen appointed as the Federal Reserve Chair, and Nancy Pelosi elected as the Minority Leader and the 60th Speaker of the House of Representatives, women appear to be holding their own in today’s political landscape. So today’s Americans can’t be sexist right? Not quite.

It is well known that when we know that other people are watching us, we tend to behave in a way we think is socially desirable. It’s become fashionable to endorse gender equality. Maybe it’s political correctness, and not any deep change in attitudes that explains the steep decline in sexism measured by national surveys. It may also be that gender bias has gone underground. Maybe sexist attitudes remain prevalent but now are buried in the unconscious.

If only we were able to get people’s uncensored and even unconscious thoughts. Psychologists argue they can.  In new research, I tap into hidden biases – the Implicit Association Test or IAT – to assess whether sexist biases reveal themselves in the ballot box. And I did this in a critical swing state in the US – Florida.  The IAT is a test to see how quickly you can match or associate words with pictures. Anthony Greenwald (U. Washington) and Mahzarin Banaji (Harvard) designed this measure to test how people feel and think deep down about things like race, age and sex. So I tailored the measure to pick up sexism with respect to political leadership and looked at whether it affected vote choice.

My study yielded an intriguing finding: in following instructions to sort images rapidly, the mind often balked at accepting a woman as a leader. The average person found it easier to pair words like “President” and “Executive” with male names and words like “Assistant” and “Aide” with female names. So a silly test says we’re sexist? Why should we care?

Well, we should care because this result mattered in a meaningful way. The more difficulty a person had in classifying a woman as a leader, the less likely the person was to vote for a woman.  Even when I take explicit gender attitudes and demographic characteristics (e.g., respondent age, gender, education level, religiosity, income, party identification, political knowledge, political interest) into account, implicit attitudes matter. As Figure 1 shows (the “equal strength” condition), I found that the likelihood of choosing the female candidate over an equally qualified male candidate when moving from having a strong implicit preference for the female candidate to having a strong implicit preference for the male candidate is 14 percentage points. Traditional explicit measures like the Gallup poll measure above do not capture the total effects of gender preferences. 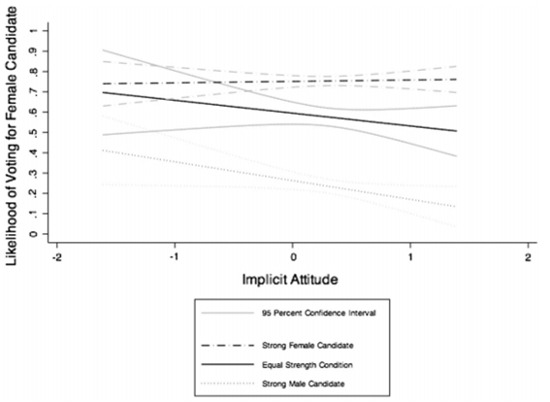 Despite a society in which gender equity is politically correct and socially desirable, bias exists, and you can see it in how people vote. Even when I consider only those who explicitly say that they would support a female candidate, I found that if they have difficulty associating women with leadership attributes, they are less likely to vote for a woman in a noticeable way. Even among those who state gender-equitable ideals, individuals may have an underlying predisposition to favor male candidates over female candidates. So there appears to be a gulf between our conscious ideals of equality and our unconscious tendency to discriminate in the ballot box.

Yet the presence of implicit bias does not mean a woman can’t win at the ballot box. Champions of women’s rights will be pleased to know that those that are overtly gender-neutral and have unacknowledged and/or unintended implicit prejudice against women will override their implicit bias and support the female candidates if she is supremely more qualified than her male opponent. However, no such override is detected among those with an explicit prejudice; although as indicated in the Gallup Poll, the share of the population who are explicitly gender biased is a minority. Moreover, if winning female candidates have to be visibly more qualified on average than winning male candidates, then bias against women candidates is not necessarily an artifact of the past.  So the news for female candidates is mixed.

To that end, my study points to the role political elites and institutions can and do play to counteract the likelihood that citizens base their vote on cues like the sex of candidates. I demonstrate that if voters have an opportunity to learn who the more qualified candidate is, those who explicitly subscribe to egalitarian norms can regulate the expression of their implicit gender prejudice.

According to my research, efforts to increase women’s representation in politics then require a two-pronged approach that enhances the opportunity for correction. First, when identifying, recruiting, endorsing, and supporting potential female candidates in mixed-gender races, quality considerations are more important for the viability of the female candidate than for the male candidate. In making political judgments, absent information about individuals that can set candidates apart, cues like candidate sex can play a troublesome role. As such, female candidates that are, on average, more qualified than male candidates, have a greater potential to succeed. However, added qualifications are meaningless if voters are not aware of them.

This brings me to my second point. Institutions that provide voters with the opportunity to learn about the candidate (e.g., ballots with information beyond name or party identification, debates, mailers) are key in efforts to override the role that traits like candidate sex may play in their electability.

This article is based on the paper, ’The Consequences of Explicit and Implicit Gender Attitudes and Candidate Quality in the Calculations of Voters’, in Political Behavior.

Cecilia Hyunjung Mo – Vanderbilt University
Cecilia Hyunjung Mo is an Assistant Professor in the Department of Political Science, with a courtesy appointment at the Peabody College of Education and Human Development. She is also a 2015-16 W. Glenn Campbell and Rita Ricardo-Campbell National Fellow and the Robert Eckles Swain National Fellow at the Hoover Institution, Stanford University. Her research and teaching interests include a broad array of issues in political behavior, public policy, and the political economy of development.