Focusing on eligible products, not retailer markups, may be a more effective way to contain the WIC food assistance program’s costs.

Focusing on eligible products, not retailer markups, may be a more effective way to contain the WIC food assistance program’s costs.

In new research, Tina Saitone, Richard Sexton, and Richard Volpe look at ways in which costs in the Women, Infant and Children (WIC) food assistance program might be contained. Using WIC purchasing data from California, they find that smaller stores charge significantly higher prices for WIC authorized foods. Using a simulation exercise which eliminates the least competitive, and highest priced vendors, they find that program costs could be reduced by 6.25 percent. However, they suggest that despite these potential cost savings, restricting the products covered by WIC vouchers to vendors’ least cost items may be more effective in reducing program costs.

The US Women, Infant and Children (WIC) program) provides supplemental food and nutrition to low-income women who are pregnant or postpartum, as well as their children, up to age five. Cost containment in WIC is a persistent concern, over 70 percent

Our research has focused on the California WIC program, by far the largest such program in the U.S., to examine the drivers of food benefit costs.  We found that prices for WIC-authorized foods vary widely by retailer size, with smaller, non-A50 stores typically charging significantly higher prices. For example, a voucher for a basket of goods consisting of milk, whole-grain bread, and breakfast cereal was redeemed for a total price averaging 48 percent more at single-register stores, compared to large supermarkets with at least 10 registers. However, these smaller stores account for a relatively small share of total WIC transactions, limiting the cost savings achievable by targeting them with potential regulations. For example, between 2009 and 2012, stores with four or fewer registers only accounted for about 15 percent of the total value of all WIC redemptions in California. A50 stores, themselves often small, collectively accounted for 37 percent of program redemptions during this same period.

As a part of their cost containment strategies, nearly all state WIC agencies organize their authorized retailers into vendor peer groups. The agencies then set a maximum allowable redemption rate for vouchers in each peer group on a rolling basis, effectively setting price ceilings for WIC foods at WIC-authorized retailers. At the time of our study California vendors were organized into 16 peer groups defined jointly by three geographic zones and five store size categories measured by the number of cash registers, with A50 vendors comprising the 16th peer group.

To study food prices and WIC program costs, we used the comprehensive records of California WIC redemptions made from October 2009 through 2012. As a starting point, we examined how WIC prices vary according to vendor peer groups. Figure 1 shows box plots for the redemption values of a very popular WIC food voucher consisting of low-fat fluid milk, eggs, cheese, and a choice between dry beans or peanut butter. Note that we observe very little pricing differences across the geographic groups, but some large differences by store size. The differences by register count decrease with larger store sizes, meaning that we see the biggest average price difference when comparing stores with 1-2 registers vs. 3-4 registers, and little difference when comparing 7-9 register stores to those with 10 or more registers. 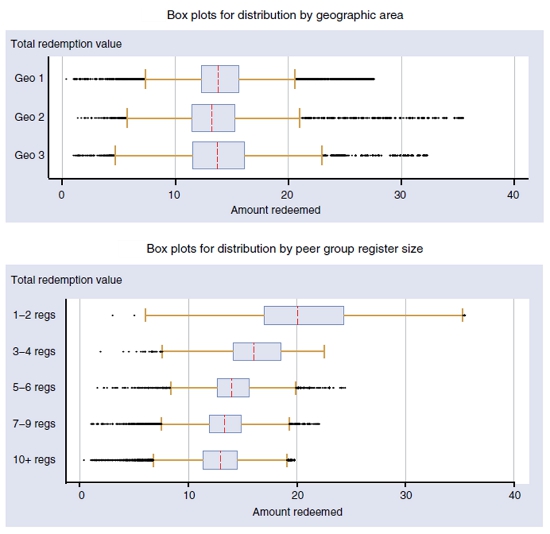 Based on the price differences across vendor peer groups, we conducted a simulation exercise to estimate the total savings achievable by California WIC by eliminating the least competitive, or highest-priced, authorized vendors. We in effect “resold” the WIC vouchers redeemed at all authorized retailers with five or fewer vouchers based on prices representative of those offered at larger stores in the same general location as the small stores. This reduces program costs by approximately 6.25 percent. We argue that these potential savings are relatively small given the regulatory difficulties that would be associated with bringing these price adjustments about, and the concerns associated with store access for WIC participants, many of whom lack private vehicles.

Wholesale and retail price data for two major California supermarket chains were used to further investigate pricing behavior for foods in the Women, Infant and Children program and address the concern that vendors would attach a greater markup to WIC foods due to participants’ insensitivity to price. Applying a regression analysis to control for a number of fixed effects, we found little evidence supporting higher price markups for WIC-authorized foods, as compared to a control group of similar foods that were not included in the program.

Further, we investigated promotional activity and WIC status, recognizing that retailers may lack incentives to offer sales or price cuts on WIC foods. However, on average, across a wide range of product categories, WIC foods were promoted only 0.5 percent less often than comparable non-WIC foods and, when on sale, prices for WIC items were cut by about 2 percent more than non-WIC items. These differences are not economically significant and suggest that large WIC retailers do not price discriminate across products based on WIC eligibility despite the insensitivity to price of WIC customers, likely because a large share of their customers are non-WIC.

Overall, some degree of low-hanging fruit exists for cutting WIC food costs by focusing on a carefully selected group of small retailers who serve a large share of WIC customers and do not qualify as A50 vendors. However, a more effective path to achieve cost containment may be through the vouchers and the products covered by them. In California, most vouchers afford WIC participants a great deal of flexibility in terms of brands, varieties, and product sizes. This in turn means that a given voucher can exhibit a great deal of variation in its redemption value, even within vendor peer groups. Some states, however, restrict WIC participants to purchase a vendor’s least-cost item in key product categories, such as milk, eggs, and cheese. The next step in this research is to identify the highest cost foods allowable by California WIC and to examine consequences of eliminating them for program cost and participation rates among eligible clients.

This article is based on the paper, paper ‘A Wicked Problem? Cost Containment in the Women, Infants and Children Program‘, in Applied Economic Perspectives and Policy.

Note:  This article gives the views of the author, and not the position of USAPP – American Politics and Policy, nor the London School of Economics, or the Federal Reserve System.