Obamacare may be changing the way that American farms work

Obamacare may be changing the way that American farms work

The introduction of Obamacare has helped millions of Americans to obtain health insurance, and at lower cost. In new research, Mary Clare Ahearn looks at how Obamacare might affect the workforce of the 2.1 million farms in the US. She finds that Obamacare is likely to benefit farming families with low incomes, but that it has also given larger farms which are subject to the employer mandate incentives to reduce or alter their use of labor.

The health care reform debate has long been a part of the public discourse in the United States and has continued to be a dominant issue in recent years. Escalating health care costs and a four-decade decline in employment-based health insurance coverage contributed to the passage of the Patient Protection and Affordable Care Act in 2010 (also known as ‘Obamacare’).  The Act considerably alters incentives for how individuals and employers engage in the health care market, with both “carrots” in the form of subsidies and cost limitations for enrolling, and “sticks” in form of penalties for noncompliance. The Affordable Care Act has also been the focus of two U.S. Supreme Court rulings as parts of the law have been legally challenged. The Act has largely withstood these challenges.

In 2013, 13.4 percent of the U.S. population, or 42 million people, were without health insurance. About half of the population receives insurance through their employers. Employment-based insurance is the most important source of insurance coverage for farm families, too, because of the prevalence of off-farm employment in farm families. Farm households in which neither the operator nor the spouse engage in off-farm employment are the least likely to have health insurance.

Employers in the U.S. agricultural industry are the least likely to offer insurance. In fact, less than half of agricultural employers offer health insurance and approximately one-third of individuals who reported farming as their primary occupation are offered insurance coverage. Part of the problem stems from the lack of bargaining power small firms have with insurance companies, and most farms are small. The health marketplace feature of the Act is designed to overcome this problem by spreading risk across a large number of employers.

A significant piece of the new health care legislation is the expansion of the established Medicaid program, based on family income relative to a low-income threshold. Under the first of two Supreme Court rulings, States were permitted to determine if they would expand Medicaid. In spite of the expected favorable economic benefit to States, many States are choosing not to expand Medicaid, largely based on ideological arguments.  As of July 2015, 30 States plus the District of Columbia have decided to expand Medicaid and 20 States have not yet decided to participate in Medicaid expansion. This difference in implementation of the law by State has resulted in significantly different impacts on the percent of uninsured persons in each State.

In recent research, my colleagues and I examined the likely impacts of the Act on farm households and farm businesses, using data from the U.S. Department of Agriculture’s Agricultural Resource Management Survey (ARMS). ARMS is the only national data source that is representative of all farms and collects information on farm labor and health insurance coverage of farm families. 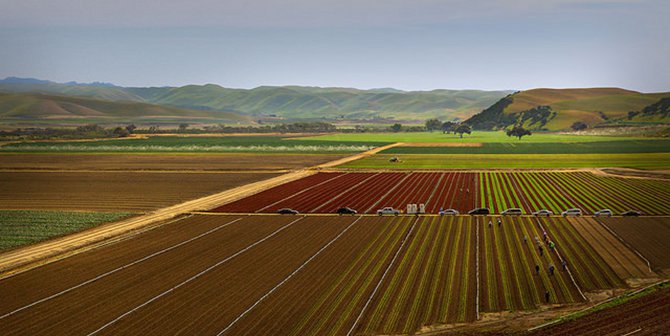 Not surprisingly, farm households with low family incomes are less likely to be insured and to benefit from the new law. Nearly, one-fifth of nonelderly farm families would benefit from the new law, based on their family income relative to a low-income threshold, but the law provides other benefits for those above the low-income threshold. Given that the original law was designed as if all States would expand Medicaid and that has not been the case, a “gap” in coverage has emerged for some low-income households.  For those States choosing not to participate in the Medicaid expansion, some farm families with incomes below 100 percent of the low-income threshold, i.e., those in the gap may actually be paying more for insurance than many above the 100 percent of the Federal Poverty Line.  An advantage for farm families, relative to most nonfarm families, is that eligibility for premium subsidies is strictly based on incomes and not assets.  Many farm families have low incomes but well-above median assets levels.

Farm employers with fewer than 50 employees (based on full-time equivalent employees and adjusted for seasonal hiring), like other small businesses, are exempt from the employer mandate, which obligates certain employers to provide insurance coverage to their workers. More than three-quarters of the 2.1 million U.S. farms do not hire any labor; rather labor is provided fully by operators and family members. Less than 1 percent, or 1,582 farms, would be affected by the employer mandate to provide health insurance for those businesses that hire 50 or more full-time employees for more than one quarter. Some farms with 50 or more workers already provide their workers with health insurance, especially since farmers have often stated to lawmakers that they are experiencing farm labor shortages, severe in some areas, they have additional incentive to provide health insurance to keep and entice workers. Because many farm laborers are hired through a farm labor contractor, the law may change the traditional contractual arrangements between growers and labor contractors.

There is some evidence that insurance is an incentive for many farm operators and their spouses to participate in the off-farm labor market. Although off-farm labor market participation may decrease somewhat among farm households who are eligible to obtain non-employment based insurance coverage, any decline in the U.S. would be expected to be negligible because the majority of farm households have a member who works full-time off the farm and depend on their off-farm income as their major source of income.

Aggregate production has been concentrating on fewer and fewer farms for decades, and along with that concentration has come the concentration of hired labor on the largest farms.  Hence, the employer provisions of the legislation may have implications for the structure of U.S. agriculture. Many farm operators are already considering ways to adjust their use of hired labor (e.g., through labor-saving technologies like robotics) due to concerns about labor supply; and now the health care legislation has provided additional incentives to those with more than 50 employees to reduce or alter their use of labor.  This may lead to a greater use of contract labor or farms reorganizing into smaller units to avoid the employer mandate. On the other hand, if labor contractors are required to provide coverage and the cost of their services increases to producers, the increased cost may induce farm operators to hire workers directly and benefit from a stable workforce.

This article is based on the paper, ‘Implications of Health Care Reform for Farm Businesses and Families’, in Applied Economic Perspectives and Policy.

Note:  This article gives the views of the author, and not the position of USAPP – American Politics and Policy, nor the London School of Economics, nor the United States Department of Agriculture.

Mary Clare Ahearn – Senior Economic Consultant and Editor of the Agricultural and Applied Economics Association’ Choices publication
The research was initiated while Mary Clare Ahearn was an Agricultural Economist with the United States Department of Agriculture’s Economic Research Service. Her primary areas of expertise are the economic well-being of farm operators and their households, the structure and the performance of the agricultural sector, and policies affecting structure and well-being. She also has experience in valuation of nonmarket goods and services and rural health care.