Past research has found a correlation between voting and voting again in future elections, but is there a causal link? In new research which uses Get-out-the-vote and voter eligibility cutoff data from across the US, Alexander Coppock and Donald Green find that there is such a link: voting in one election increases the likelihood of voting in a subsequent election by 10 percentage points.

Voting is habit-forming: the act of voting itself increases the probability of voting in the future. Many previous studies have noted a correlation between individuals’ past and future voting patterns. However, this relationship may reflect differences between frequent and infrequent voters (such as education, political interest, or income) rather than the effect of voting itself. Applying two research designs able to establish causal relationships, we find that on average, voting in one election increases the probability of voting in a future election by 10 percentage points.

As an illustration, imagine two individuals who are alike in all ways except one is randomly assigned to abstain from in the 2012 election and the other is assigned to vote. If the first person’s probability of voting four years later in the 2016 election were 60 percent, our results would lead us to expect that the second person’s probability of voting is 70 percent. This effect is substantively large – it is approximately the same magnitude as the difference in voting rates between people in their 20s versus people in their 30s.

Variation in the Habit-forming Effects of Voting

The smallest effect we observe is in New York, at approximately 7 percentage points. The largest effect, in Arkansas, is nearly 20 percentage points. The horizontal lines on the plot represent 95 percent confidence intervals — the smaller they are, the more precisely estimated are the effects. Because none of the intervals cross zero, we can describe all of these effects as statistically significant (i.e., there is a very low probability that the positive estimates occurred by chance). 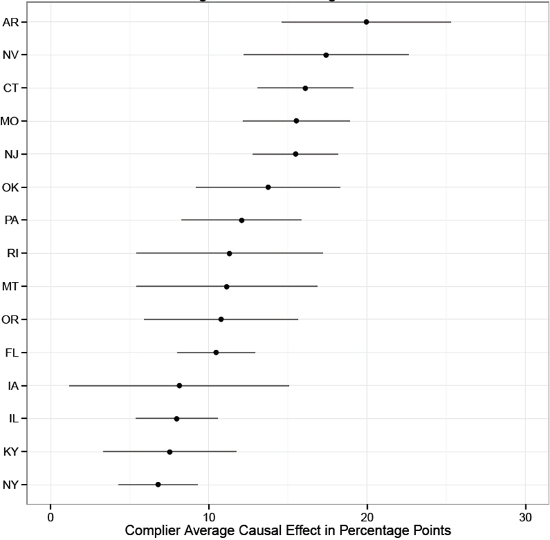 Studying the habit-forming effects of voting requires us to create or exploit a situation in which individuals are similar except for the fact that some vote and others don’t. We take advantage of two such situations: large-scale Get-Out-The-Vote (GOTV) experiments and the voting-age eligibility cutoff.

Consider a GOTV experiment that was carried out in 2006. Voters in the treatment group were sent mailers that displayed their past vote history and indicated that researchers would be watching to see if they turned out or not (the so-called “Self” mailing). Those in the control group turned out at a rate of 31 percent, those who got the Self mailing turned out at 36 percent – the treatment increased turnout by 5 percentage points.

The treatment versus control difference in voting behavior persisted for at least the next 6 years: in every August election between 2006 and 2012, the treatment group voted at a statistically significantly higher rate. The figure below shows how the voting rates of the two randomly formed groups evolved over time.

We measure the habit effect for each downstream election. For example, in August 2010, the difference in turnout between the treatment and control groups was a statistically significant 0.8 percentage points. Our estimate of the effect of voting on voting, then, is 0.008 / .05 = 0.16, or an estimated treatment effect of 16 percentage points.

One particularly interesting pattern emerged from these analyses: the habit effect appears to be stronger in elections that are of the same “type” as the election in which the treatment was deployed. For example, as Figure 3 illustrates, we find that encouragement to vote in an August primary makes one more likely to vote in subsequent August elections. 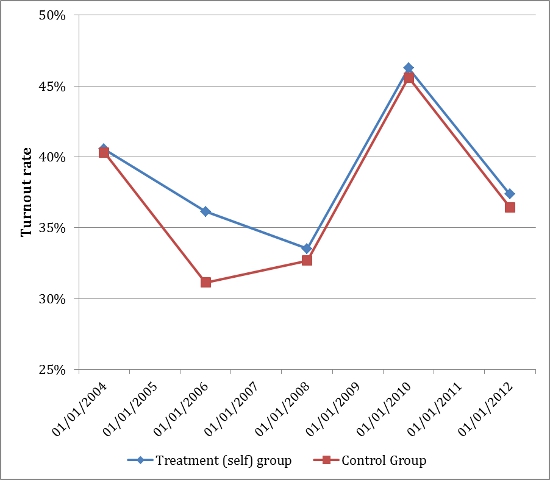 In the US, citizens who are 18 or older on Election Day are eligible to vote. The timing of this cutoff is “as-if random,” justifying the assumption that “just-eligibles” are similar to “just-ineligibles” in every way except their eligibility status.

Figure 4 below has three panels. In the top panel, we plot the raw 2008 vote totals, by birthdate, of those who were born within a year on either side of the 2008 eligibility cutoff. The Florida Secretary of State records approximately 250 votes per birthdate for those just-eligible to vote, and (appropriately) 0 votes per birthdate among the ineligible. 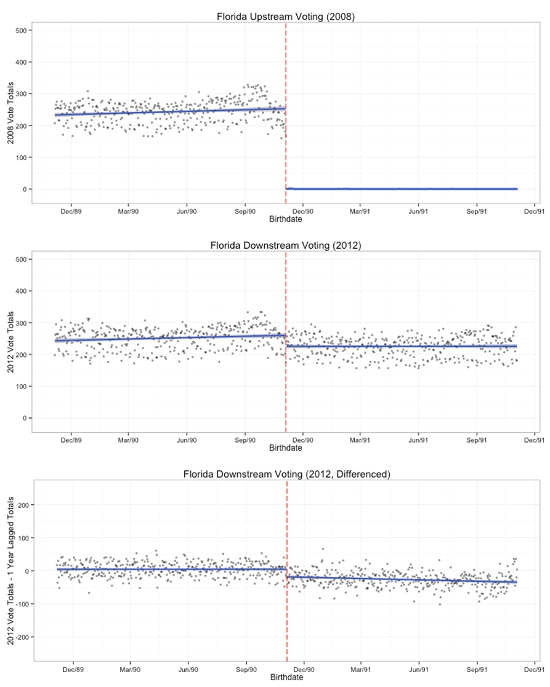 The middle panel shows the 2012 vote totals — the estimated difference at the cutoff is approximately 35 votes. There are two interesting features of the raw data that this plot makes clear: first, you can see the separation between weekdays and weekend days: fewer babies are born on the weekend. Second, you can see the seasonality in birth trends: more babies are born in the fall.

The bottom panel accounts for both sources of variation by subtracting off the vote totals of those born one year prior. (We were careful to match days of the week, so this lag is not exactly 365 days.) When we account for the one-year lag, a large source of variation disappears — we no longer see either the day-of-the-week pattern or the seasonality trend. The estimate at the cutoff is approximately 25 votes per birthday cohort.

Our estimate of the effect of voting on future voting is the ratio of the two estimates: 25/250 = 0.10 or 10 percentage points. We chose to show the Florida estimates here because the estimate for Florida is very close to our average estimate.

The act of voting exerts a powerful effect on future voting. Now that we have established this robust causal relationship holds in many places and times, future research should investigate the psychological mechanisms that are responsible. Is voting habit-forming because it increases citizens’ interest in elections? Are the costs of voting (finding one’s polling place, navigating the ballot, reflecting on whom to vote for) lower after having voted previously? These are the sorts of questions we hope to answer when we combine this research design with survey-based outcome measures.

This article is based on the paper, ‘Is Voting Habit Forming? New Evidence from Experiments and Regression Discontinuities’, in the American Journal of Political Science.

Alexander Coppock – Columbia University
Alexander Coppock is PhD candidate in political science at Columbia University.  His research interests lie in political persuasion and participation, with a special focus on the implications for campaigns and elections.  His recent articles may be found in the American Journal of Political Science, Political Behavior, and the Journal of Experimental Political Science.

Donald P. Green – Columbia University
Donald P. Green is Professor of Political Science at Columbia University. Much of his current work uses field experimentation to study the ways in which political campaigns mobilize and persuade voters.  With Alan Gerber, he recently co-authored a textbook titled Field Experiments: Design, Analysis, and Interpretation and the third edition of Get Out The Vote: How to Increase Voter Turnout.