In the 2012 presidential election the Republican Party nominee, Mitt Romney, was considered by many to be a moderate. So why, then, did he choose the more ideologically extreme Congressman, Paul Ryan, to be his vice-Presidential running mate? In new research, Thomas P Krumel Jr and Ali Enami argue that a moderate presidential candidate may look to someone farther to their right or left in order to expand their voting base, and thus shift the view of the median voter to the right, thus helping them to gain more votes.

Presidential primary season is squarely upon us. We are still months away from the Iowa Caucus in February, but the media is already spending considerable effort scrutinizing the various strategies being employed by the potential nominees. Even with the all this expert analysis, it is difficult to understand the totality of moves being made by candidates when we are within the season. It is much easier to look back at previous seasons to glean an enlightened viewpoint of how specific moves fit into an overall strategy. One such move that arose directly as a result of the primary season in the 2012 election which deserves additional analysis is why Mitt Romney selected Paul Ryan as his running mate.

Revisiting the political strategy from the 2012 Presidential Election

In the 2012 Republican Primary, Mitt Romney outlasted three other candidates that carried delegates (Rick Santorum, Ron Paul and Newt Gingrich). In many contexts, Romney was considered to be the most moderate of the potential Republican nominees. The manner in which the primary played out conforms to the current literature, which indicates that when an incumbent is perceived to be more extreme (as was the case with President Obama), the challenger that emerges will be a moderate. The challenging party hopes that by selecting a moderate nominee, they will have an increased chance of unseating the incumbent. This strategy is attempting to pander to the undecided moderate voter. An issue with this strategy arises when considering the fact that the selected challenger might no longer reflect the policy position of a number of potential voters within the base of the party.

Predictions of the median voter model

The median voter model, in its simplest form (Figure 1), summarizes the political view of a society in terms of a line where the far-left and far-right of this line express the most extreme views of the members of a society taking part in a given election. The political position of each candidate in the election is represented with a point on this line. Voters represent all the points on this line and will vote for a candidate that is the closest to them. Figure 1 shows how voting would take place in an imaginary two-candidate election. The main prediction of this simple model is that the winner of a two-candidate election is the one who is closest to the middle (or the median voter). This model also predicts that the two candidates would try to make their political view as appealing as possible to the perceived median voter. This is known as the “rush to the middle.”

Past research has shown that there is no significant effect of a running mate changing the opinion of who an individual chooses to vote for (this extends to the obvious case of a Democrat not voting for a Republican because of their running mate and vice versa, as well as showing that undecided voters would also be unaffected), instead, it finds that the major impact a running mate does have in a presidential election is reserved to own party participation. In other words, while a running mate may not be able to change the idea of the current median voter, they may be able to change who the actual median voter is.

The simple median voter model assumes that the policy spectrum (the line in Figure 1) is given (constant). This is not the case if more extreme members of a party decide not to vote for the moderate candidate of their party (or vote third party) to “punish” the rest of their party for nominating a candidate that does not reflect their position on the spectrum. A strategy that a moderate candidate can utilize to appeal to such a voter is to choose a more politically extreme running mate that may be able to convince these potential voters to participate in the election. If the running mate succeeds in increasing the participation from these extreme members, the position of the median voter would move toward the preferred candidate of their party (Figure 2). Since the literature tells us that a running mate would not change the opinion of those who have already decided to vote in an election, the fact that the running mate has a more extreme platform should not cause any noticeable cost in terms of lost votes.

This strategy has the potential for success when the other candidate is an incumbent candidate who has been in the office for the current term (which was the case in 2012 presidential election). An incumbent candidate has already revealed their true political agenda during their first term and cannot alter their policy position. Moreover, the success of this strategy in wining an election depends on other important factors, including the number of extreme voters who would decide to vote as a result of an extreme running mate, as well as the initial “distance” of the candidates from the median voter.

Bringing Paul Ryan into the fold

Paul Ryan was first elected to the United States House of Representatives in 1998. His first term as a Representative for Wisconsin coincided with the 106th Congress. He had served a total of six complete terms prior to being asked to join the Romney ticket as the vice-presidential candidate in the 2012 Presidential Election. Figure 3 below shows Paul Ryan’s conservative ranking compared to the other members of the House during his tenure (according to the DW-Nominate model). 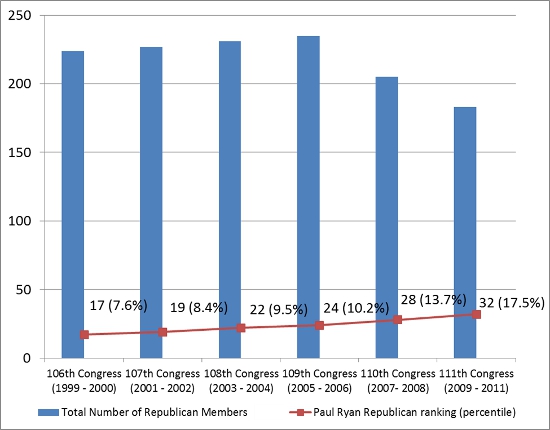 Applying the information from Figure 3 to the discussion on the Median Voter Model, we can determine that the main reason that Ryan was added to the Presidential ticket was to balance the ticket while appealing to the base. His conservative tendencies were an attempt to shift the median voter toward the right. This conclusion is consistent with the current academic literature and helps to contextualize this strategy. Our overall conclusion is that the main role that the running mate plays in the presidential election is a policy tool to alter the voting distribution.

This article is based on the paper, ‘Balancing the ticket while appealing to the base: The game theory behind Mitt Romney’s selection of Paul Ryan as his presidential running mate’, in Party Politics.