Political candidates can successfully use targeted appeals to increase support from female voters.

Political candidates can successfully use targeted appeals to increase support from female voters.

Recent presidential and congressional elections have featured growing appeals to specific groups, including women. But are these marketing techniques actually effective at persuading women voters? In new research using experiments which test how voters respond to such appeals, Mirya R Holman, Monica C Schneider and Kristin Pondel find that such identity-based targeting makes it more likely that both men and women will vote for a certain candidate. Appeals by women candidates, they write, are also more likely to be effective with women voters, as they activate group identity among women.

During the 2012 election, one of Barack Obama’s often-used presidential campaign videos featured his wife Michelle speaking directly to women: “This November, there is so much on the line for all of us, but especially for women. Our votes will determine whether we will keep fighting for equal pay in the workplace, whether we keep supporting women small business owners, and whether women will be able to make our own decisions about our bodies and our healthcare.” The ad is but one of the hundreds of appeals aimed at women from campaigns on both sides of the political spectrum in recent elections. Beginning in the early 2000s and continuing through the 2014 elections, the U.S. has seen a marked increase in campaigns’ use of marketing techniques (called micro-targeting) aimed at specific groups, including women. However, it is unclear whether or why these ads are effective in persuading voters.

Political campaigns increasingly know more about potential voters, including their characteristics and interests. Candidates often use information from voter databases to attempt to persuade cross-pressured partisans—those who disagree with their party on one or more issues – using those specific issues of disagreement, such as stem cell research or abortion. As campaigns intensify their efforts to attract voters, they have also become increasingly reliant on consumer-marketing techniques, including seeking out smaller groups of voters to send individualized messages.

In new research, we investigate the effects of a special subset of these individualized messages: identity-based targeting or a candidate’s efforts to appeal to voters’ emotional attachments to a particular social group that has political meaning. We focus on appeals to female voters in the American electoral context for several reasons: 1) women make up over half of the voting electorate and are thus an important group for understanding campaign dynamics; 2) gender identity has to potential to influence the vote; 3) women’s voting patterns are distinct from men’s; 4) studying women is normatively important, as women are descriptively underrepresented throughout American politics. Therefore, attempts by campaigns to woo female voters can have implications for women’s substantive and descriptive representation.

Our research uses an experiment to examine how women and men respond to these identity appeals. Half of our respondents viewed a website that was not targeted to female voters (our control condition, featuring a message about transportation) and the other half viewed a one that was targeted towards women (our identity appeal condition, featuring a message about violence against women). When we compare how participants reacted, we find that both male and female candidates benefit from targeting women in their campaigns. In fact, compared to the control condition, identity ads increase women’s votes for the candidate who employed them. Men respond positively to identity-based ads from female candidates and are unaffected by their appeals by male candidates. 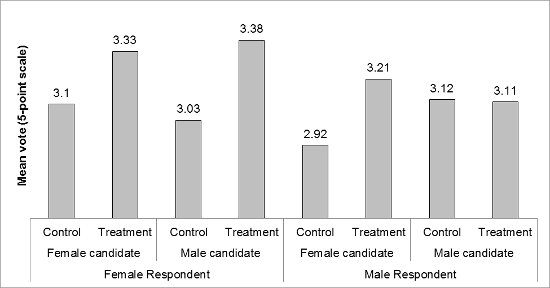 Figure 2 – Effects of Closeness on the Vote among Female Respondents 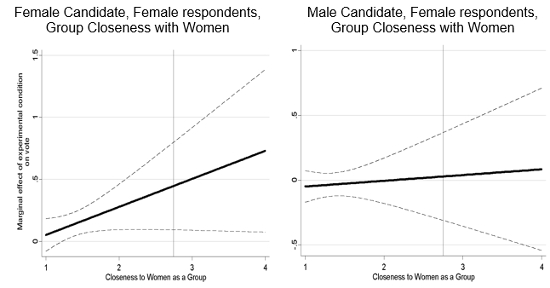 The identity appeals from male candidates do not increase group-ties among women. They do, however, increase the view that the male candidate is a strong leader and compassionate, which are important considerations in the vote decision.

The 2012 and 2014 election cycles saw an unprecedented number of political advertisements, with an increasing number of those ads targeted at specific groups of people. All signs point to a greater reliance on micro-targeting in the 2016 election. Our results suggest that appealing to female voters based on an identity-based appeal is effective to the extent that the appeal contains substantive information about the candidate’s stances on issues of importance to a particular group. Future research could evaluate whether empty identity appeals – those that aim to target a group’s identity without substantive discussions – are also successful in changing the minds of voters. Candidates outside the American context are increasingly using micro-targeting to reach voters – evaluating how these appeals work in different political systems might lend further insight into their effectiveness.

Given the number and reach of ads targeted to women – from the Presidential race down to local elections – it is important to understanding campaign effects and representation to know how, why, and if these ads affect voters. The success of identity targeting suggests that we may see even more identity-targeted advertisements, particularly given their effectiveness in eliciting vote support for a candidate, regardless of whether the candidate belongs to the group.

This article is based on the paper, ‘Gender Targeting in Political Advertisements’, in Political Research Quarterly, which will be free to read until November 30th, 2015.