How Rosie the Riveter led to the 1950s’ Baby Boom

How Rosie the Riveter led to the 1950s’ Baby Boom

The two decades following World War II were characterized by a massive upswing in birth rates in the US and other countries – the so-called ‘baby Boom’. While the traditional explanation of the Baby Boom is that families made up for babies that were delayed due to the war, in new research Matthias Doepke suggests an alternative explanation. He argues that the Baby Boom of the 1950s was fuelled by the crowding out of younger women from the labor force by older women who had gained work experience during the war. These younger women then got married and had babies earlier, and in greater numbers.

Between the end of World War II and the early 1960s, the United States experienced a remarkable baby boom. The total fertility rate (a measure of the number of children each woman will have, given current fertility patterns) increased from just over two before the war to a peak of close to four children per woman in the late 1950s (Figure 1). The large variations in cohort sizes generated by the baby boom have shaped the US economy ever since, including the economic boom in the 1990s when the baby boomers were in their peak earning years, and the daunting challenges in financing retirement and health benefits in the coming decades as the baby boomers enter retirement. 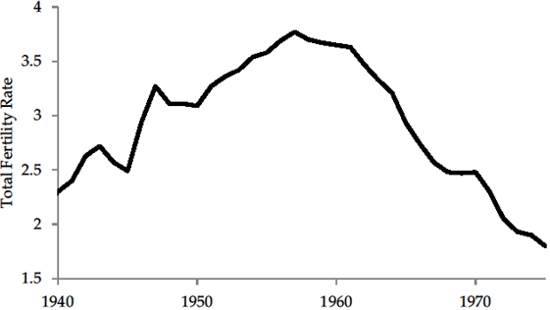 While there is substantial agreement on the consequences of the baby boom for the US economy, the underlying causes of the rise in fertility have remained controversial. A defining point in this debate is the role of World War II in explaining post-war fertility. Initially, the fact that fertility rates started to rise soon after soldiers returned home from the battlefields suggested to many that the baby boom may be due to families making up for the babies they did not have while husbands were serving in the military. However, a detailed look at the data reveals that this mechanism can explain at most a small fraction of the baby boom. Fertility peaked in the late 1950s, and most of the rise in fertility is due to young mothers under the age of 25. Hence, the mothers who gave birth at the peak of the baby boom were mostly too young to be married to men who served in the war. Given this mismatch, for many years research into the causes of the baby boom has focused on mechanisms unrelated to the war, such as innovations in household technology or the consequences of the Great Depression.

In recent research with Moshe Hazan and Yishay Maoz, we argue that the World War II was responsible for the baby boom after all, albeit through a more subtle mechanism than the desire for kids of returning soldiers. In our view, much of the baby boom can be explained by the ramifications of World War II for women’s labor market opportunities. Indeed, the war was a watershed moment for American women’s role in the labor force. As the men were fighting in Europe and Asia, millions of women joined the labor force, and they were responsible for a large part of the rise in wartime production. Women had been working before the war, too, but almost exclusively in their early twenties before getting married. The big change during the war was that older married women, including those with children, also entered employment.

The surge of female employment during the war proved to be a watershed, because many women who joined the war production effort liked the experience, and decided to stay in the labor force even after the men returned home. Hence, in the two decades after the end of the war we observe a large increase in the labor supply of married women.

Now as far as explaining the baby boom is concerned, pointing out that the war increased female employment may appear to make the puzzle even bigger – after all, having children and having a job are two activities that compete for time, so that a rise in female employment generally tends to go along with fewer babies. However, the key to our argument is that the surge in female employment had opposite effects on two different cohorts of women: the war generation of women old enough to work in World War II, and younger women still in school during the war who would reach childbearing in the late 1940s and 1950s.

The women of the war generation benefitted from the additional work experience, and thus continued to work at high rates throughout their adulthood. In contrast, women in the younger cohort had a much harder time finding employment, because they had to face strong competition from the experienced war generation. Before the war, female employment was the almost exclusive domain of young, single women. As these women married they used to free up jobs for the next generation. In the post-war years, in contrast, many jobs were already taken by the older women, resulting in dire employment prospects for the following cohorts.

With the older women dominating the labor market, young women were crowded out, and had to look for something else to do. Many of the younger women adjusted by getting married and starting to have babies a little earlier than they would have had they been employed. Ultimately, they ended up building bigger families with more children. It is the story of these younger women that explains most of the baby boom. 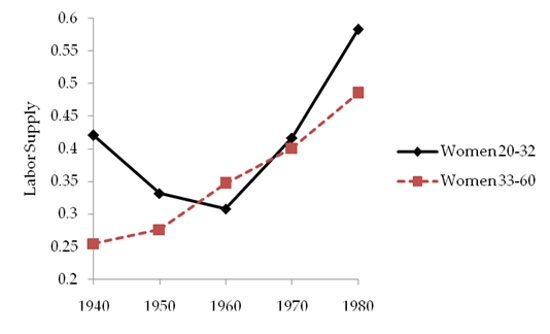 Our account of the baby boom is consistent with the observation that the employment of younger (i.e., childbearing age) and older women moved in opposite directions after the war (Figure 2). Evidence on variation in the baby boom across US states is also consistent with the mechanism. States with higher mobilization rates (i.e., a higher fraction of men joining the armed forces) had a larger surge in female employment during the war and a larger rise in fertility after the war. A final piece of evidence comes from variation across countries. Many countries were affected by the war, but only a few countries experienced a large rise in wartime female employment. We should expect the post-war baby boom to be large only those countries where female employment surged. The evidence lines up precisely with this prediction. Canada, New Zealand, and Australia are the three countries with a war time experience very similar to the United States, in terms of a large rise in female employment and also in terms of the absence of major war time destruction (which may have a separate effect on post-war fertility). Figure 3 shows that the baby boom was large and similarly timed in all of these countries. In contrast, in the neutral European countries (which also escaped war time destruction, but didn’t experience a rise in female employment), there is no pronounced rise in fertility after the war (Figure 4).

Figure 3 – Completed fertility rates (i.e., average number of children per woman in a given birth cohort) in the United States and allies with a similar war experience. 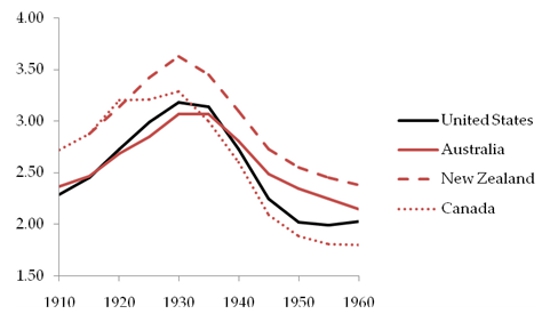 Figure 4 – Completed fertility rates (i.e., average number of children per woman in a given birth cohort) in the United States and neutral countries. 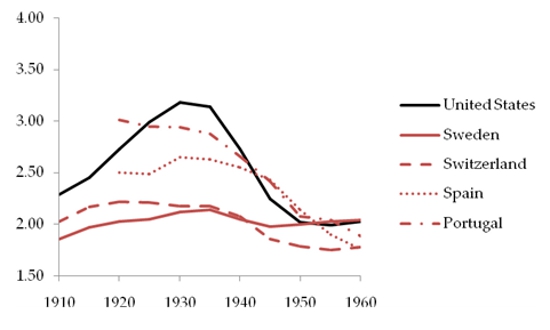 Today’s demographic challenges are quite different from those of the baby boom period; notably, many industrialized countries now suffer from extremely low fertility rates, population aging, and population decline. Nevertheless, our work suggests that the key tradeoff that drives fertility today, namely between work and careers on the one hand and childbearing on the other hand, was equally responsible for explaining fertility trends during the postwar baby boom.

This article is based on the paper “The Baby Boom and World War II: A Macroeconomic Analysis” in the Review of Economic Studies.