The rise of gentrification in many North American cities has been much commented upon. But according to new research, trends towards gentrification are only part of the story. Nick Revington looks at new research from Markus Moos which finds that high-density urban redevelopment is also associated with a younger population. This process of ‘youthification’ is driven by young people’s desire for smaller households and closer proximity to amenities, as well as higher housing costs and a more uncertain labor market.

Much has been made of Millenials’ housing challenges: young adults today face less employment security than in the past, while costs have risen in many cities. At the same time, high-density urban redevelopment continues apace – sometimes even extending into suburban areas. According to recent research by Markus Moos, at the University of Waterloo in Canada, this is producing a distinct process of youthification in North American cities.

Youthification represents the increasing presence of young adults within a given neighbourhood. Of course, young age has long been associated, rightly or wrongly, with gentrifiers and the creative class in both popular stereotypes and academia alike. But little attention has been paid to age in its own right as a factor structuring urban space.

Some North American cities have higher shares of young adults than others (Figure 1), and these tend to be those cities with good economic prospects and urban amenities, such as Salt Lake City, Austin, and Calgary. Places with extraordinarily high living costs, like New York, Boston, San Francisco, Toronto, and Vancouver don’t have as large a share of young adults. But while high costs may hinder the attraction and retention of young adults, low costs alone are not enough, either. Cities that have experienced economic decline, such as Pittsburgh, Cleveland, and Detroit have some of the lowest shares of young adults out of all major North American cities.

It would seem, therefore, that the cities with the highest presence of young adults are those rich in both amenities and opportunities, but with a lower cost of living than the largest global cities. A similar pattern would seem to hold within cities, where dense, vibrant urban neighbourhoods hold larger young adult populations in places like New York (Figure 2), Seattle (Figure 3), and Vancouver (Figure 4). No such concentration exists in Detroit (Figure 5). 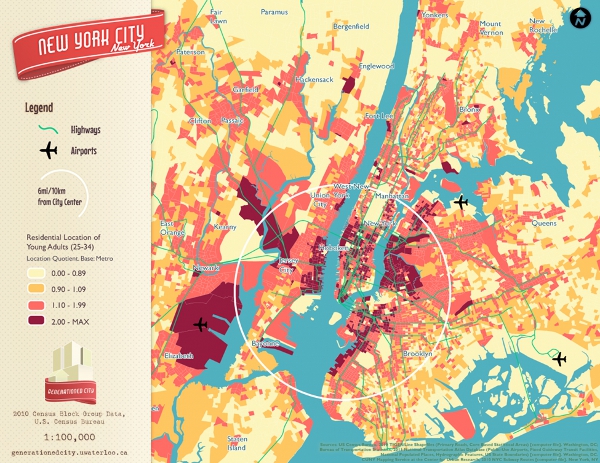 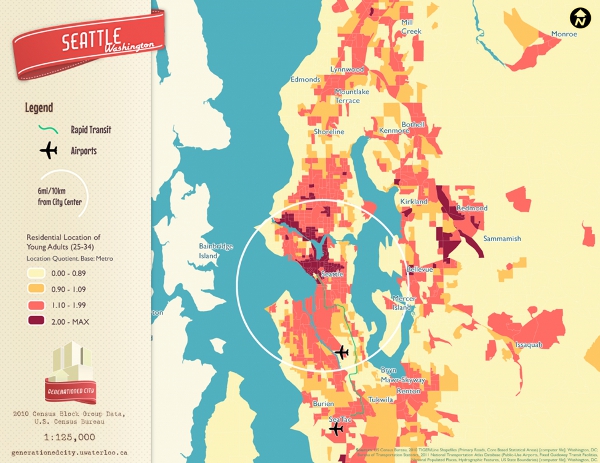 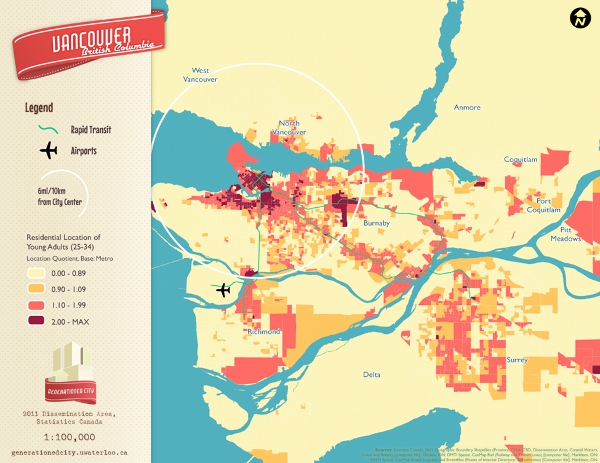 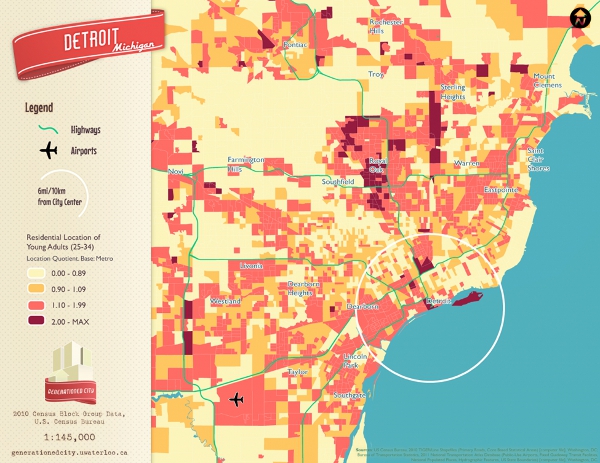 For a closer look at the youthification process, consider the cases of Toronto, Montreal, and Vancouver. Moos considers dwelling density a measure of urbanity, one that captures urban redevelopment taking place in otherwise suburban places, rather than simply equating centrality with the urban. Between 1981 and 2011, the correlation between those aged 25-34 years old and dwelling density increased across all three metropolitan areas. This means that young adults are more likely to be associated with high-density living now than in the past. In contrast, those in the 45-54 and 55-64 age brackets, and to a lesser extent those aged 65 and over, became more closely aligned with lower density environments over the same time period.

These correlations are telling, but they do not isolate the influence of age from other factors. Young adults may, for example, have smaller household sizes or lower incomes – traits that are also conducive to living in smaller units, characteristic of high-density apartment or condominium towers, rather than single-family homes in low-density suburbs. To assess the relative role of age Moos modelled dwelling density as a function of census tract characteristics such as age, household income, household size, the share of immigrants and the share of potential gentrifiers. Potential gentrifiers are defined as those in the ‘new middle class’ – workers employed in the quaternary sector of the economy.

The models confirm that age is, on its own, an important differentiator of urban space. Furthermore, the importance of young age in particular has increased over time. In 1981, young age was only a significant predictor of urban living in Vancouver. By 2006, however, young age was a more pronounced and significant factor in delineating high-density areas in all three metropolitan areas.

Youthification is clearly taking place, but it is happening in parallel to other trends. The share of new immigrants remains the strongest predictor of high-density living. The presence of potential gentrifiers also shows greater association with density over time. On the other hand, larger, richer households are – perhaps predictably – more likely to live in low density neighbourhoods.

According to Moos, a number of inter-related factors drive the youthification process, although the relative influence of each is unclear. The desire for an urban lifestyle, with amenities accessible by walking, cycling, or transit, coincides with demographic trends that see young adults living in smaller households and putting off having children until later, if at all. Meanwhile, a combination of high housing costs and an increasingly uncertain labour market, in which young adults earn less than in the past, makes it more practical to buy or rent a smaller space for lower total cost than a suburban home, trading off higher per-area cost for a shorter commute.

Previous research suggests that youthification is not simply a temporary trend, either. Neighbourhoods with high shares of young adults tend to have also had high shares of young adults 10 or even 20 years earlier. These “forever young” neighbourhoods imply that people move to lower-density areas as they age and have children. This could pose challenges to planning initiatives looking to increase urban density, as high-density neighbourhoods struggle to retain families with children. The elderly may also be dissuaded from downsizing to smaller units within these neighbourhoods. Whether or not youthification will contribute to age segregation or reinforce ageism remains to be seen.

What is clear is that age does structure urban space. Unravelling just how this takes place will have important implications for cities, as they balance the evolving needs of residents of all ages.

This article is based on the paper, ‘From gentrification to youthification? The increasing importance of young age in delineating high-density living’, in Urban Studies.