With the US economy now returning to steady growth in the wake of the Great Recession, some cities and regions are once again experiencing growth in house prices. Often, this house price growth will spill over into other nearby regions. There may be a variety of reasons why house prices spill over from one region to another. One explanation is that migration or equity transfer to regions where house prices are comparably low could lead to the ripple effect by increasing demand and, thereby, prices. Furthermore, information asymmetries may imply that new information regarding the housing market available in one area is only gradually transmitted to other submarkets.

But when looking at Figure 1, which plots quarterly house price data over time for 319 US metropolitan statistical areas, it does not seem that these spillovers are uniform across space and time. The strong annual house price growth rates observed in California in 2004 has apparently been transmitted to the northern coastal regions, as higher rates can be observed in those regions in 2005. The same can be observed along the east coast. Apparently, rising house prices in coast regions affect neighbouring regions, but this does not happen inland.

Where could these differences in house price spill overs come from? The behavioural literature suggests the disposition effect as a possible explanation. The disposition effect reflects the phenomenon in financial markets that investors sell their winning stocks too quickly and hold their losing stocks too long. It also holds for the real estate market and implies a market slowdown in times of decreasing house prices. Sellers confronting losses are likely to set higher list prices. If buyers are unwilling to pay these prices, the houses then stay on the market for a longer time. Homeowners could decrease list prices, but research finds that they do not so but instead delay selling in order to avoid nominal losses. This behaviour reduces the transaction volume in the housing market and, consequently, limits house price spillovers. Furthermore, in the behavioural economics literature there are several concepts that may provide an explanation as for why sellers do set higher list prices and delay selling when confronted with a loss.

The concept of mental accounting, for example, means that individuals group elements of their consumption and expenditures in mental accounts. They follow their personal rules in managing those accounts. When homeowners hold on to their losing asset, it is because in their mental account the loss is only booked when the asset is sold. Another concept is cognitive dissonance, the mental conflict that occurs when they find evidence that their beliefs are not true. People experiencing cognitive dissonance try to trivialize or avoid the new information, developing explanations as to why their current beliefs or assumptions should not be revised. For the housing market this would mean that homeowners avoid the information of declining house prices or try to find explanations as to why this decline does not apply to their home. Thus, they will not reduce their asking price even when confronted with falling house prices in the region. This behaviour should be reflected in smaller house price spillovers. As homeowners’ selling behaviour depends on the overall development of house prices, so will house price spillovers. In this sense, the disposition effect may serve as an explanation for heterogeneity in house price spillovers.

This article is based on the paper, ‘The Spatial Dimension of US House Prices’, in Urban Studies. 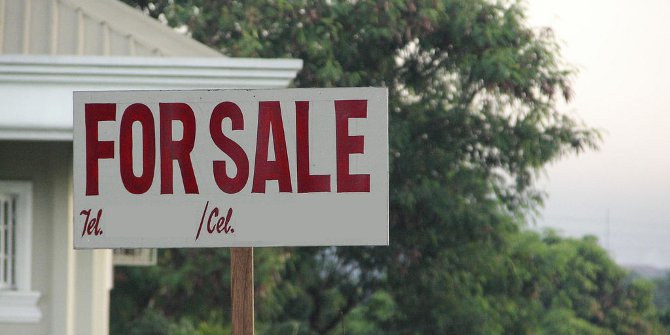