In many large cities, established public transport stations are often accompanied by a number of shops and services. But do newly built stations similarly encourage nearby commercial activities? In new research which examines the effects of new transit stations in Los Angeles, Sacramento, San Diego and San Francisco/San Jose, Jenny Schuetz finds that despite considerable investment, these developments have generally not attracted shops, restaurants and services. She writes that this may be down to a number of local factors, including zoning regulations, and local residents’ preferences towards cars.

Commuters emerging from the subway onto streets in Midtown Manhattan, the City of London, downtown Montreal or Tokyo are likely to be greeted by a panoply of shops and services.  The symbiotic relationship that leads retailers to cluster around train stations in busy central business districts is obvious: transit riders benefit from being able to shop and run errands on their way to and from work, while shopkeepers depend on a steady flow of foot traffic.  However, riding the subway away from downtown often reveals more variation in the commercial environment near stations.  Some rail lines pass through densely populated neighborhoods with a mix of apartment buildings, restaurants and shops, while more remote stations in mostly residential areas often have few businesses within walking distance.  The evident variation in quantity and density of commercial activity near stations, even in cities with well-established rail networks, raises the question: will shops and consumer-oriented services pop up near newly-built stations in cities that are currently investing in transit infrastructure?

My new research finds that newly built train stations in California’s four largest metropolitan areas – Los Angeles, Sacramento, San Diego and San Francisco/San Jose – have generally not attracted clusters of shops, restaurants and services.   Between 1992 and 2009, 254 new stations operated by 11 separate transit systems, opened nearly doubling the number of stations in the state (Table 1).  To understand how the opening of new rail stations affected retail activity, I tracked employment within one-quarter mile of new stations before and after they opened. I then compared this to employment around older stations in operation the entire period, and to a set of similar comparison neighborhoods located between one-half and three miles of at least one rail station.  These comparison neighborhoods provide a sense of how retail might have evolved over time in the station areas, had the stations not been built.

California offers an interesting setting in which to observe whether shops cluster near train stations.  The subways and light rail lines in California’s urban areas were built more recently than those in other US cities such as New York, Boston, and Chicago.  With the exception of San Francisco, California cities grew most rapidly in the second half of the 20th century, and so developed land use patterns suited to automobile transportation: lower-density and more spatially dispersed than cities in the Northeast Corridor of the US or in Europe.  Mass transit systems can more efficiently reach consumers in densely populated areas. Yet over the past 20 years, policymakers have expended considerable public resources – from local, state and federal sources – to develop rail transit networks throughout California, with the dual goals of improving transportation and spurring economic development.

Whether new rail stations will attract shopping clusters – or any other form of high-density, mixed-use transit oriented development – depends on the characteristics of the station neighborhoods before the stations are built as well as the additional value that rail access brings to each location.  Unlike many older subway systems, which consist of a dense network of stations concentrated near the city center, most of California’s rail systems are hub-and-spoke systems that connect residential suburbs to the Central Business District (CBD).  With the exception of the City of San Francisco, rail networks are relatively sparse.  For instance, the City of Los Angeles has a total of 59 stations spread across 470 square miles, compared to 44 stations over 68 square miles in Washington DC, which also has a relatively new rail system.  Few California commuters rely on rail transit: about five percent of households in the San Francisco-San Jose metropolitan area ride subways, light rail or streetcars to work, while less than one percent of households in the other three metro areas commute by rail.

California’s rail networks are largely above-ground light rail systems, which are less expensive to build than traditional subways, but which require transit operators to acquire rights-of-way along the track – a difficult enterprise in established urban areas.  Because of the combined difficulties of land availability, financing, state and local land use regulation and resident opposition, many of the newer rail systems were built adjacent to other transportation infrastructure (http://www.ethanelkind.com/railtown-book-and-other-publications/).  For instance, the Burbank Metrolink Station is located immediately adjacent to the busy Golden State Freeway (Figures 1 and 2), while the Commerce Metrolink Station consists of one passenger waiting bench and a sign attached to the fence of an existing freight rail line (Figures 3 and 4).  Rail stations in such locations are not particularly attractive to pedestrians and thus are unlikely to draw retail or residential development immediately proximate to the station. 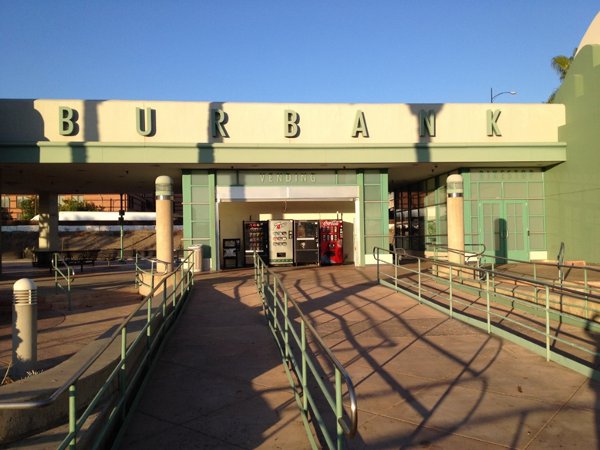 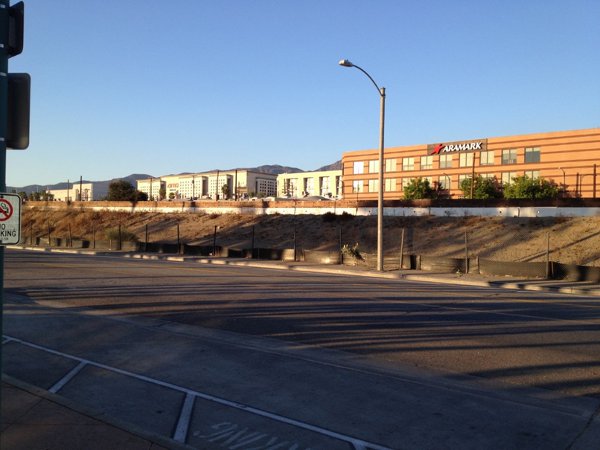 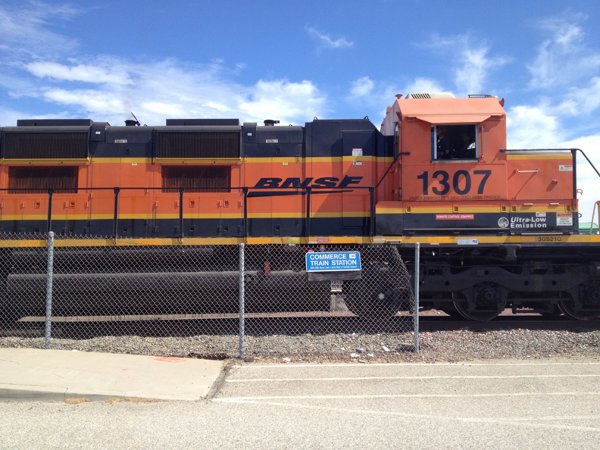 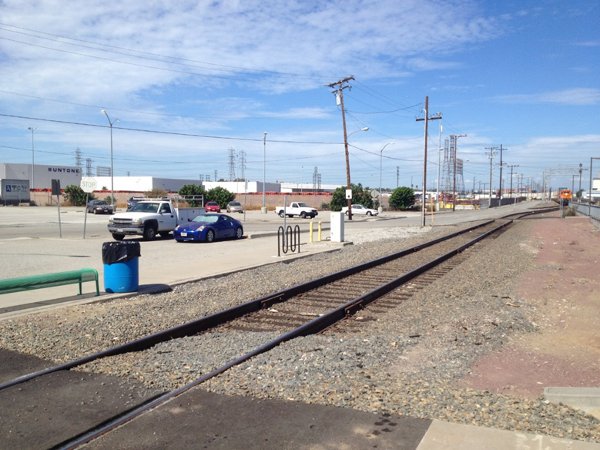 Stations built between 1992 and 2009 were located in areas with high existing employment densities and slightly lower population densities, compared with older station areas and comparison neighborhoods (Table 2).  New stations were located on average seven miles from the CBD, slightly farther than older stations, reflecting their tendency to serve commuting suburbs rather than central urban neighborhoods.  Both old and new station areas are slightly less affluent than neighborhoods that never received stations, which could reflect higher use of public transit by low-income households.

New rail stations were built in neighborhoods that already had considerable retail activity – on average, roughly 2000 retail employees per square mile – and this increased to nearly 2700 employees in the years after the stations opened (Figure 5).  But in this instance, average effects are deceiving.  While retail density more than doubled near new rail stations in the San Francisco/San Jose metropolitan area, the number of retail workers near stations decreased in Los Angeles and Sacramento, and showed no statistically significant change in San Diego.  Of course, these simple differences do not indicate what might have happened in these neighborhoods had the rail stations never been built.  To establish a more reliable counterfactual, I estimate a variety of regression analyses with controls for initial differences in neighborhood characteristics, such as non-retail employment density, population density and distance from the CBD.  Statistical analysis indicates no significant differences in retail employment density near station areas after the stations opened in three metropolitan areas, and show relative decreases in retail activity near Sacramento stations. 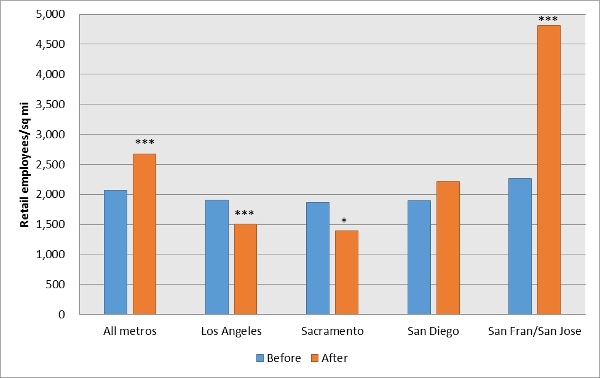 Why have California’s rail stations not drawn shopkeepers eager to provide commuters with coffee and newspapers?  One potential reason is that the impacts of new rail stations on the surrounding environment will depend on the prior conditions.  Some of the new stations were built in highly dense urban areas, where fragmentation of land ownership and zoning regulations pose significant barriers to (re)development.  Conversely, stations in industrial areas are unlikely to attract retail.  Households may prefer to shop for some items at free-standing malls with convenient parking – especially in car-oriented cities like Los Angeles and San Diego.

Finally, local economic development is only one goal of public investment in transit infrastructure.  The investment’s success should also be judged by how well rail systems improve access to existing employment centers and amenities.

This article is based on the paper, ‘Do rail transit stations encourage neighbourhood retail activity?’, in Urban Studies.

Note:  The analysis and conclusions set forth in this article are solely the responsibility of the author and do not indicate concurrence by the Board of Governors or other staff in the Federal Reserve System, and is also not the position of USAPP – American Politics and Policy, nor of the London School of Economics

Jenny Schuetz – Board of Governors of the Federal Reserve System
Jenny Schuetz is a Senior Economist in the Division of Consumer and Community Affairs at the Board of Governors of the Federal Reserve System.  Her research focuses on urban economics, real estate and housing policy.  Jenny received a PhD in Public Policy from Harvard University, a Master’s in City Planning from M.I.T., and a B.A. with Highest Distinction in Economics and Political and Social Thought from the University of Virginia.  Her current projects include a study of transit-oriented development in Los Angeles and the impacts of neighborhood revitalization policies on crime.