Despite being academically ready, many students fail to take a college entrance exam. In new research, George Bulman finds that this may be due in part to differing access to such exams from school to school and state to state. He finds that new testing centres are likely to increase SAT test taking rates by 4 percentage point for those students who live nearby. He writes that, especially for high ability students, increasing access to exams makes it is much more likely that they will continue on to, and complete, a four-year college education.

A growing number of studies find that the decision to attend college may be shaped in large part by access to information about the application process and college options. For example, a non-trivial fraction of students who appear academinally ready for college nonetheless fail to take the SAT or ACT – entrance exams that are required for admission to most four-year colleges. Failure to take the exam could be due in part to a lack of awareness about when and where to take them or to logistical barriers such as securing transportation to a testing center. In new research, I find that when these barriers are reduced and awareness is increased, it causes some students to take the exam, learn about their college options, and ultimately attend college. Thus improving access to college entrance exams is a potentially cost effective method of increasing investment in education relative to traditional approaches such as subsidizing tuition (for which federal and state governments spend tens of billions of dollars annually).

Nearly every four-year college in the United States requires applicants to take the SAT or ACT in order to be considered for admission. However, all high school students are not required to take the exam and, in practice, many do not – including many who are likely to perform well based on their prior performance on standardized exams. This is shown in Figure 1, which compares the distribution of scores for students who take the SAT with the distribution of scores that would occur if all students took it. The most notable aspect of this comparison is the many students in the top half of the aptitude distribution nonetheless fail to take the exam (and thus may never be aware of their college options). 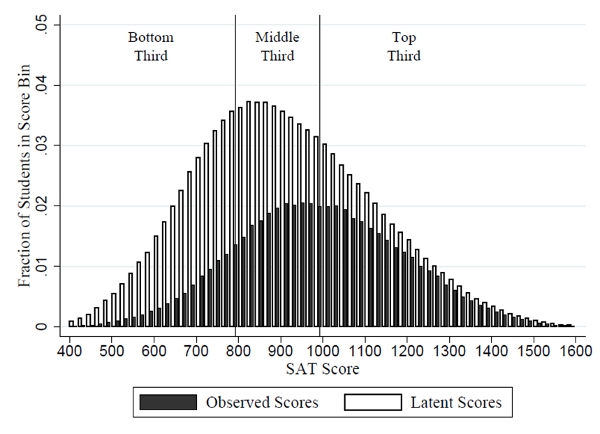 Simply comparing the outcomes of students with varying levels of access in unlikely to generate credible results. Schools that make it easy for students to take the SAT may also have more capable teachers and counselors and serve segments of the population that are more inclined to attend college. To mitigate against this, I exploit the opening and closing of testing centers over time and the resulting change in access this generates for students at hosting and neighboring schools, and compare between students who attended the same high school but in adjacent graduating cohorts that differ in terms of whether or not there was easy access to a center. Likewise, I compare students in adjacent cohorts who graduate immediately before and after a district policy is adopted that makes the exams free to all students.

A primary challenge in answering this question is the lack of a national database that tracks students from high school to college in the United States. Thus the study merges administrative records from the College Board (who administer the SAT) with college enrollment records from the National Student Clearinghouse (who collect enrollment data directly from colleges). I also collected a new database of testing center locations which reveals when and where they open and close over time.

New testing centers are found to increase SAT taking by about 4 percentage points (8 percent) for students attending the high school where it opens and 1.4 percentage points for students attending neighboring schools located within 5 miles. Center closures have a corresponding decrease in SAT taking of about 2.3 percentage points (5 percent). Importantly, many new takers earn scores similar to their peers who take the exam regardless of their proximity to a center. While the new takers do not perform as well as the average taker, many earn scores that could earn them admission to selective four-year colleges. District policies, by design, dramatically increase the fraction of students taking the SAT, generating increases of about 31 percentage points. However, as a result of compelling more students to take the exam, the average scores of new takers are decidedly lower.

The sudden increase in the fraction of students taking the SAT at specific schools makes it possible to examine their subsequent college outcomes. Approximately 40 percent of students who take the SAT as a result of a center opening go on to attend a four-year college (generating a net increase in four-year college attendance of 1.6 percentage points). It is worth noting that this is a smaller rate of enrollment than for a typical SAT taker. Only about 10 percent students who take the exam as a result of a district policy attend a four-year college. The lower fraction of new takers who attend college under district policies is likely a function of the fact that many of these students may have had no interest in attending college in the first place and many earn relatively low scores.

Of particular interest is determining which students, among the new takers, attend college. Inducing students with low academic ability to attend college may not desirable – they may be unable to graduate with a degree and may be saddled with debt. However, the analysis suggests quite the opposite. About 65 percent of new takers from the top one-third of the aptitude distribution attend college relative to only 15 percent from the bottom of the distribution. This ratio is tilted more in favor of high ability students than the average rates of attendance among all SAT takers. That is, positive selection is very strong among students induced to take the SAT through access to testing centers. Perhaps as a result, there is no evidence that these students are more likely to drop out of college than other matriculates. The analysis of students who take the SAT as a result of district policies suggests a similar pattern. Less than 4 percent of new takers from the bottom third of the aptitude distribution are estimated to attend college, while nearly 39 percent from the top of the distribution attend.

Overall, the results suggest that some high ability students do not take the SAT because they are deterred by barriers to access such as identifying when and where to take the exam. When these students are induced to take the exam and learn their options, many go on to attend a four-year college. Estimates of the typical income returns to college from the literature combined with the estimates in this paper indicate that the lifetime return to taking the SAT for marginal takers from the bottom, middle, and top of the ability distribution is approximately $50,000, $125,000, and $200,000. Offering the exam at all schools, or requiring all students to take it, is likely to satisfy any cost-to-benefit analysis.

This article is based on the paper, ‘The Effect of Access to College Assessments on Enrollment and Attainment’, in American Economic Journal: Applied Economics 2015.