The election of Barack Obama in 2008 marked a change in US foreign policy from intervention towards a greater emphasis on pragmatism and an acknowledgement of the limits of American power. Reviewing Obama’s foreign policy legacy, Ellen Hallams writes that the 44th President has both acted to reduce US engagement abroad but has also worked to preserve US primacy. She writes that in attempting to shift America’s strategic narrative to better reflect the realities of a post-American world, Obama has, however, fuelled perceptions of US weakness and strategic incoherence, a narrative that his successor, whoever that may be, is unlikely to continue.

‘Don’t do stupid shit;’ such was Obama’s response in 2014 when asked by reporters aboard Air Force One to describe his foreign policy. Obama has been a president who, by his own admission, is anti-doctrinaire. When asked a similar question before the burdens of the presidency had worn him down, he stated any Obama doctrine is ‘not going to be as doctrinaire as the Bush doctrine, because the world is complicated. And I think part of the problem we’ve had is that ideology has overridden facts and reality.’ Much has been made of Obama’s pragmatism as a central tenet of his presidency. He is an individual who eschews ideology and dogma, preferring a narrower focus on US interests than his predecessor, and who governs with both an acute sense of the limitations of US power as well as a determination to make decisions on a case-by-case basis. The latter has invited sustained criticism, leading to charges of strategic incoherence, the weakening of US influence and prestige and confusion among US allies over the future of US global leadership.

Gone is the over-confident, hubristic and even narcissistic projection of America as the indispensable nation, underpinned by the rhetoric of liberal internationalism, democracy promotion and regime change that dominated George Bush’s presidency. In its place has been a more sober and humble appreciation of the limits of US power, borne of a conviction that not only had America overreached during the Bush years but that progressive social and economic reform at home was the urgent priority. Yet neither has Obama, for all his rejection of ideology and dogma, proved either able or willing to reject notions of the US as the ‘indispensable nation’ in world affairs. He has both questioned America’s exceptionalism and reaffirmed it; his speeches have been infused with hard-eyed realism as well as soaring idealism; he has sought to restore faith in the legitimacy of American leadership yet operated in his own dark shadows in the war on terrorism; he has acted with unshakeable resolve in using force to take out Osama Bin Laden, but could not find the courage of his convictions to depose Assad in Syria. His professorial, intellectual presidential style has won him few plaudits at home or abroad, yet on issues closest to his heart – racial injustice, nuclear weapons – he has delivered inspiring sermons imbued with a passion and idealism that exposed glimpses of the transformational president many had hoped he would be.

The contradictions and complexities inherent in his approach to foreign policy have fuelled debate over whether Obama is as committed to the pursuit and maintenance of US hegemony in the international system as his predecessors. So many of his speeches, policies and actions – drawing down from Iraq and Afghanistan; cutting defence spending and adopting a ‘light footprint’ defence posture; seeking to accommodate China and Russia; a wider preference for engagement rather than containment – are hardly befitting a president who is whole-heartedly committed to a Pax Americana. Yet neither has he wholeheartedly embraced strategic retrenchment. His escalation of the war in Afghanistan, his use of drones and targeted killings, the rebalance to Asia, the use of force in Libya and military aid to Eastern Europe during the recent Ukraine crisis – all reflect what seems an underlying determination to preserve US primacy or what John Ikenberry terms ‘deep engagement’ in the international system.

What Obama has tried to do, with limited success, is reposition the US in what he understands to be a ‘post-American’ world; a view not shared by everyone in the political establishment. He has sought to shift America’s strategic narrative, a narrative that since 1945 has centered upon a liberal international consensus based on a commitment to defending, maintaining and promoting a liberal democratic world order with the US as the hegemonic organiser and manager of that order. Throughout the Cold War and early post-Cold War years, the US stood at the apex of this liberal world order, a ‘liberal leviathan’ supporting, advancing and enforcing the rules and institutions of liberal internationalism as a means of maintaining and anchoring American hegemony in the international system. Obama, however, inherited a very different context, one profoundly shaped by the context of decline in America’s relative power. Obama understood this; his prescription was to move America away from its role as the hegemonic manager of a liberal order, in which the US both sets and enforces the ‘rules of the game’ because he understands that enforcing liberal order is both a) a task to which the US cannot currently afford and b) cannot be achieved through coercion or imposition.

But the world is, as he has discovered, a messy place. By seeking to recalibrate America’s strategic narrative in the way he has, Obama has fuelled perceptions – not unfounded – that America will not intervene to deter the Putins and Assads of the world, nor will it throw the full weight of American military power behind the effort to defeat Islamic State. On Syria, the president infamously declared a ‘red line’ over the use of chemical weapons that he was not prepared to enforce, deferring decision-making to a congressional vote in a seemingly bizarre and sudden bout of deference to the constitutional separation of powers. In Obama’s second term, more so than the first, his pragmatism has translated into what comes across, intentionally or not, as apathy and indifference, a president who talks the talk of freedom and justice, but has lacked the courage of his convictions, ground down by the realities of governing and the hand he has been dealt. Even after the attacks in Paris and California, Obama is holding fast to an approach the administration has described as ‘strategic patience,’ but which indicates that the US – or at least this administration – has lost its appetite to act as a custodian of global order.

Yet on other occasions Obama’s willingness to do ‘what works’ he has adopted policies and practices that have undermined the very narrative he seeks to project. Having claimed that ‘we must remain a standard bearer in the conduct of war.  That is what makes us different from those whom we fight,’ Obama’s embrace of drones to take out suspected terrorists in sovereign states put him in precisely the same place as his predecessor; once in office Obama’s liberalism evaporated amidst what Morton Keller describes as ‘the unbearable heaviness of governing.’ Obama rationalised the use of drones to himself as a pragmatic response to an intractable problem, a necessary, if undesirable, means of protecting America’s national security with a degree of restraint, avoiding the pitfalls of the military interventionism that had fuelled America’s economic debts.

Obama’s successor will likely tack back to the very narrative Obama has sought to shift US away from. A Pew Research Centre survey in August 2014 found that 54 percent of those polled believed Obama’s approach on foreign policy is ‘Not Tough Enough;’ the share of those saying the US does too little to address global problems had also nearly doubled since November 2013 from 17 percent to 31 percent, while the percentage saying it was doing too much had fallen from 51 percent to 39 percent. Hillary Clinton has also lamented Obama’s ‘Don’t do Stupid Shit’ as not being an ‘organizing principle’ worthy of ‘great nations.’ She may well be right, and when Obama leaves the White House next year he will find it hard to refute the charge of strategic incoherence.

Pragmatism as a basis for foreign policy in the 21st century is, in and of itself, not necessarily foolish or unwise. Obama should be applauded for recognising the complexity of international relations in the 21st century, the limitations of US power, and the need for more critical and reasoned deliberation that acknowledges America’s own weaknesses and flaws, but he stands guilty of having failed to sufficiently translate these guiding principles into a coherent Grand Strategy that could provide an overarching framework within which to manage a diminished presence on the world stage whilst retaining a global leadership role.

This article is based on a talk given by the author at the BISA US Foreign Policy Conference in September 2015.

Ellen Hallams – King’s College, London
Dr Ellen Hallams is a Lecturer in Defence Studies at the Department of Social Science & Public Policy at King’s College, London. Her research interests center on US leadership of NATO during the Bush and Obama presidencies and the dynamics shaping the transatlantic bargain in the 21st century. She is founder of the Defence Studies Department Transatlantic Studies Research Group.

Posted In: Ellen Hallams | US foreign affairs and the North American neighbourhood 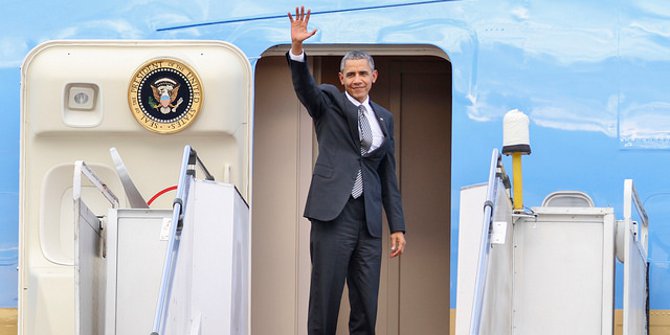