How technological change and globalization are driving higher wages of immigrants married to natives.

How technological change and globalization are driving higher wages of immigrants married to natives.

Changes in technology, international trade and job off-shoring have resulted in drastic transformations in the ways different skills are rewarded in the US economy. Starting in the 1980s, routine tasks (such as bookkeeping, clerical work, and repetitive production tasks) once performed by average skill-level workers in the US are now carried out by computers and low-wage workers in other countries. In contrast, non-routine tasks requiring in-person interactions as well as communication and managerial skills have become more important.

There is evidence that people skills are highly rewarded in the US labor market. But do individuals with better interpersonal and communication skills earn relatively higher wages today compared to the 1980s? Because it is difficult to measure these abilities, this is not an easy question to answer in general. It is especially difficult to make comparisons across several decades. We examine this question by looking at the wages of a group of people for whom communication in the US may be particularly difficult: the foreign born.

It is relatively straightforward to test whether immigrants who self-report better English-speaking abilities earn relatively higher wages today compared to decades ago. However, we believe that effective communication of ideas to native-born clients, colleagues, managers, and subordinates requires more than just text-book knowledge of English, regardless of how advanced that is. An understanding of US norms, customs, and perhaps even popular culture is also likely to be important. To measure language ability as well as this cultural knowledge, we look at marriage decisions of immigrants. 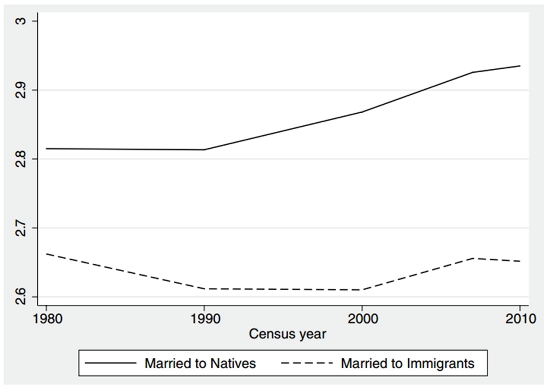 Married to Other Immigrants

Our statistical analysis of this pattern suggests that a significant part of the increasing intermarriage wage premium can be explained by changes in the characteristics of immigrants marrying natives among recent cohorts of immigrants. However, even after controlling for individual characteristics including age, education, English fluency, number of years in the US, country of origin, and whether the immigrants live in a city with a large co-ethnic population, we find that the marriage to a native wage premium increased from 1.4 percent in 1980 to 10.3 percent in 2008 – 2010, a seven-fold increase.

Although it is possible that immigrants married to natives today simply have better unobserved characteristics relative to the immigrants married to natives decades ago, we think this is unlikely because controlling for more and more observed characteristics did not really change the increasing wage premium pattern. We view changes in the rewards to English language fluency and other social skills as a more likely explanation.

It is well understood that changes in technology and globalization have increased the importance of schooling. Since immigrants married to natives tend to have more education, it may be that the increasing marriage to a native premium can be explained entirely by changes in the labor market returns to schooling. A similar story can be told for English language speaking ability.  After allowing for changes in the ways that education and English fluency are rewarded in the labor market over the years, are there still increasing marriage to a native premiums?

Our analysis suggests that these two characteristics do explain a large part of the pattern but not all of it. The marriage to a native premium increased two-fold in the previous three decades for reasons that go beyond education and language ability.  We believe the increasing rewards to the interpersonal skills of immigrants married to natives are driving these increasing wage premiums.

We note that our study does not directly measure changes in technology and globalization. Moreover, as discussed above, it is possible that the intermarried immigrants in the more recent years have better unobserved characteristics compared to those marring natives years ago. However, it is difficult to think about what these unobserved characteristics might be and what, besides technology and globalization, may have driven the increasing wage payoffs to the characteristics of immigrants who marry natives.

All of this speaks to the ongoing immigration debate in the US and across Europe. Recent cohorts of immigrants to the US have lower entry wages as well as slower rates of wage growth. Part of slower assimilation rates can be explained by a fall in in the speed at which newer immigrants acquire English language proficiency. However, our results suggest that even if there had been no change in immigrants’ characteristics, changes in technology and globalization would have decreased immigrant wages. This implies that efforts to integrate immigrants into host societies are ever more important.

This article is based on the paper ‘Intermarriage and Socioeconomic Integration: Trends in Earnings Premiums among U.S. Immigrants Who Marry Natives’, in The ANNALS of the American Academy of Political and Social Science.