Why you didn’t get a raise in 2015, Clinton campaign pulls in $55m, and will Trump’s supporters show and vote? : US national blog roundup for 26 December – 1 January

Why you didn’t get a raise in 2015, Clinton campaign pulls in $55m, and will Trump’s supporters show and vote? : US national blog roundup for 26 December – 1 January

On Sunday, Red State comments that President Obama does not understand billionaire – and GOP presidential frontrunner – Donald Trump any better than the Republican Party establishment does. They say that while Trump is a creation of the GOP, he is more specifically a creation of the way that the party has dealt with the Obama administration.

On New Year’s Day, Post Politics has the news that Obama is planning new curbs on guns via executive action, and on Monday will meet with the Attorney General, Loretta Lynch to finalize these measures. Townhall writes that if Obama does move forward with gun control measures, then his bill which would ease sentences for those convicted of drug trafficking offenses should be killed.

Moving on to the Democratic Party more generally, Political Animal examines the role of black women in the party, writing Monday that they are playing an increasingly active role in the political system, something that Democrats should not ignore. Still on the Democrats, The Fix argues that, currently only controlling one state house in the region, they are in real danger of becoming extinct in the South. One explanation for the party’s decline in the South is its lack of appeal to poor, Evangelical, conservative, whites.

On Wednesday, Daily Kos says that Republicans are desperate to avoid a battle in the Supreme Court over President Obama’s executive actions on immigration, which are now more than a year old. They write that if the Supreme Court takes up the case, then the GOP will have to argue against providing immigrants with deportation relied as the country prepares to go to the polls, something that is not likely to play well in swing states.

As 2015 drew to a close, Crooks & Liars comments that it was the year that “the ref swallowed his whistle” as the media did a poor job of calling out the lies and untruths of many of the GOP’s presidential candidates. Meanwhile, Roll Call’s At the Races looks at 2015’s ‘hangover’ issues for the 2016 elections; the woes of the GOP’s establishment, national security, planned parenthood, immigration, and education.

On Sunday, Outside the Beltway argues that the US is not on the verge of becoming a multi-party system, despite what others have asserted. They say that while the Democrats and the GOP are coalitional in nature, these differing coalitions are business as usual for the parties, not a sign that they are moving towards splitting.

Political Animal looks to 2016’s Senate races, writing that the odds are in favor of the Democrats this time around, with ten seats potentially in the running to change hands in that party’s favor.

Turning to the Democrats’ campaign, and their frontrunner, former Secretary of State, Hillary Clinton:

Moving to the GOP’s presidential primary, Red State says that it might be time for some conservatives to ‘take a deep breath’ because none in the current field of candidates are beyond criticism – the legislators among them have all voted for bills and budgets that conservatives may not agree with. Townhall also warns the GOP to not be too angry with Republicans for not being able to get enough done even though they control Congress; the alternative is Hillary Clinton in the White House – an even worse outcome for the party.

Monday sees The American Prospect explore why the Republicans’ presidential candidates are obsessed with political correctness, commenting that it is related to the rhetoric of the conservative media, who regularly talk about what they’re ‘supposedly not allowed to talk about’.

United Liberty writes on Tuesday about electability, writing that simply because a candidate lost an election – as Mitt Romney did as the GOP’s nominee in 2012 – does not mean that they are not electable. They say that the same argument around electability has come around again, this time over Florida Senator, Marco Rubio, who has relatively high favorability ratings and broad appeal.

Red State argues that the ‘coming war’ between Hillary Clinton and Donald Trump will be a win for the GOP, as the latter’s attacks on Bill Clinton may well be successful. Turning to commentary on the billionaire frontrunner:

On Sunday, Red State previews January’s docket at the Supreme Court covering California’s teachers’ union dues, the legal rights of those who have been deported should they return, and on the political support of police officers for local candidates. PoliticusUSA says that President Obama has told the Supreme Court to “butt out” of Colorado’s legalized marijuana law; Nebraska and Oklahoma have appealed to the Court to give them the right to stop the Centennial State’s legal marijuana business. Still on the Supreme Court, Post Politics points out that in 2017 four of the justices will be over 75 –including three who will be over 80.

This week, Monkey Cage looks at who the ten most effective lawmakers in Congress are. While some lawmakers are effective, The Fix reckons that speaking on the floor of the House or Senate is becoming increasingly useless, especially in the era of cable news interviews and social media. Daily Kos says that ahead of the New Year, Republican leaders in Congress have promised to return to “pointless, symbolic fights”, such as renewed efforts to repeal Obamacare.

On Thursday, Powerline wonders if US foreign policy will go from bad to worse in 2016. They say that we should expect “more of the same”, but with increased success in combating ISIS. The Daily Signal this week examines how the Obama administration changed the US’ missile defense strategy, writing that it has focused on short and medium-range missile defense protection for its European allies, rather than concentrating on protecting the US homeland.

On regional strategies, American Thinker says that the US has “jumped from the Middle East Frying pan into the fire” following President Obama’s election in 2008, who followed the worst aspects of the recommendations of the advisors of his predecessor, George W. Bush. Closer to home, Townhall argues this week that President Obama’s Cuba strategy is making life worse for Cubans in that while its leaders have benefited from the more open relations between the two countries, they are still as repressive and hostile towards human rights as ever. On Tuesday, The Daily Signal discusses how millennials view foreign policy, arguing that it is a problem that a majority of those aged 18 to 34 would prefer that the US takes a less active role in foreign policy in favor of a greater focus on domestic issues.

The Atlantic looks at the lives of those Americans who live on military bases across the world, commenting that they have a kind of social and economic security that would be unknown to many in the US’ middle class.

Governors in some red states – South Dakota is one example – have been toying with the idea of expanding Medicaid. Daily Kos says that state fights over the expansion of Medicaid reflect a larger GOP fight over healthcare. Speaking of Medicaid, The Daily Signal looks at what they say is a “budget gimmick” that is costing taxpayers; the reimbursement of taxes to health care providers at the federal government’s expense.

The Daily Signal reports this week that Senator Lamar Alexander (R-TN), chair of the Senate’s health committee, has predicted that bipartisan changes to Obamacare will be likely over the next few years, and that the program cannot be fixed by one party alone.

On Wednesday, The Atlantic talks on how doctors are experimenting with cutting health care costs, such as via apps that allow unhappy customers to request a refund. These costs clearly do need to some down; Crooks & Liars says that some desperate patients are turning to crowdfunding to pay their own medical bills. Is Obamacare contributing to higher health care costs? American Thinker thinks it is.

Did you get a raise in 2015? No? The American Prospect has four charts which might help to explain why not – it’s mostly down to the severe reduction in workers’ power in the face of rising executive compensation. Wonkblog, meanwhile writes on the economic impact of gasoline being at $2 a gallon – it’s has not helped growth as much as had been predicted, mostly because consumers are saving their savings on gas.

On Monday a grand jury in Ohio declined to indict two police officers for their role in the shooting death of 12-year old Tamir Rice in 2014. The Atlantic says that this case and others illustrates the difficulty in holding police to account when they kill civilians. On Tuesday, Wonkblog looks at where guns used in crimes come from; Georgia is the biggest exporter of such firearms. TPM wonders this week if murder rates in the US really are going up, and using the example of New York concludes that while there may be have been an increase in the past year, this is in the context of a significant fall over the past two decades.

Hit & Run reports this week that US states passed 47 anti-abortion bills in 2015, an increase compared to 2014.

Ted Cruz has no regrets, a diplomatic spat with India, and fewer Republicans believe in evolution – US national blog round up for 28 December – 3 January 2014 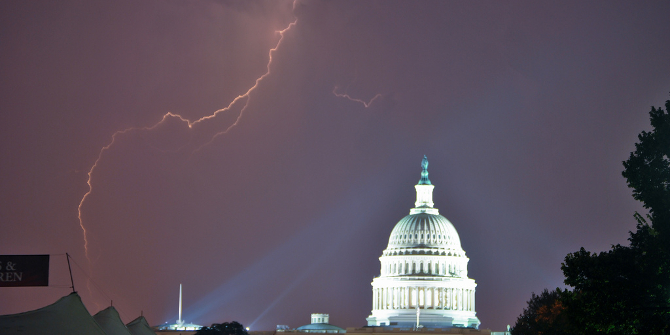 Senate endgames, an Ebola Czar, and are same sex marriage bans sexist?: US national blog round up for 11 – 17 October

Obama’s Syria speech fails to impress, de Blasio wins New York nomination, and is the Dow Jones index ridiculous? – US blog round up for 7– 13 September.

Eric Cantor in shock primary defeat, most Americans now against death penalty, and are federal executives underpaid?  – US national blog round up for 7 – 13 June