The recent executive actions on gun control announced by President Obama have been met with both applause and criticism. Any response other than indifference is probably an overreaction, writes Matthew Lang. If the President’s actions are eventually carried out, background checks will rise as more private firearm sellers become legally viewed as dealers. The increase in background checks is unlikely to have any effect on gun-related deaths. Instead, he argues, President Obama’s announcement will most likely increase the number of firearms purchased by gun advocates, as is typically the case whenever gun owners perceive a possible threat to the Second Amendment. According to recent research, firearm-related deaths are unlikely to respond to an increase in the number of guns per household. Reducing gun violence will take more than redefining what it means to be a firearms dealer.

President Obama this week announced a number of executive actions aimed at reducing firearm-related violence. The President reiterated that any person who is “engaged in the business” of selling firearms must be a licensed dealer and carry out background checks. The actions are specifically targeted at the “gun show loophole”, which allows private firearm sales to be completed without a background check, regardless of where the sale takes place. The announcement also called for more funding for mental illness and a 50 percent increase in the number of Bureau of Alcohol, Tobacco and Firearms (ATF) employees carrying out background checks. Any change in federal funding for mental health or the ATF must be approved by a Republican-controlled Congress.

The law, as it currently exists, vaguely defines a firearm dealer as someone who profits off of firearms sales. Anyone who occasionally exchanges firearms to enhance his or her personal collection is not considered a firearm dealer. President Obama’s call to clarify what constitutes a firearm dealer is probably not an overreach of executive authority, as some claim. However, the “stricter” definition of a firearm dealer remains vague since the action states that, “There is no specific threshold number of firearms purchased or sold that triggers the licensure requirement.”

For a moment, assume that the goals of the executive orders are reached and every purchaser of a firearm goes through a background check, effectively closing the “gun show loophole”. The relevant question then becomes whether requiring background checks on all gun sales will have an observable impact on firearm-related deaths. According to recent research, there is little evidence suggesting that changes in the sales and prevalence of firearms leads to a significant change in firearm-related homicides.

In a new study, I do not find any evidence that increases in background checks in a state lead to changes in criminal activity. Other research directly addresses the potential “gun show loophole” and finds that gun homicides, gun suicides and individual crimes are unrelated to the location and timing of gun shows in California and Texas. After the Brady Handgun Violence Prevention Act was passed in 1994, a mandatory five day wait period was placed on firearm purchases until the FBI’s National Instant Criminal Background System (NICS) began in November, 1998. A current working paper shows that the wait periods had no effect on homicide rates. 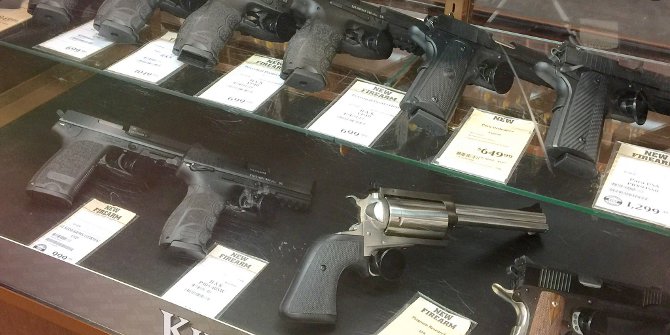 Most evidence suggests that the executive orders will have a minimal impact on homicides, but some research shows that increasing the availability of firearms can lead to more suicides. Two years ago in a post on this site, I discussed my research showing that firearm suicide rates and background checks are directly related. The study also finds that the presence of more firearms may increase overall suicide rates. The working paper mentioned above is consistent with my work and shows that firearm related suicides decreased as a result of the Brady Act waiting periods.

If Obama’s executive actions curb firearm sales, it is possible that suicides may decrease. However, there is no reason to believe that firearm sales will decrease in response to President Obama’s executive actions. In fact, any action by the US government that could be interpreted as a threat to the Second Amendment is likely to increase firearm sales. The relationship between the 2008 Presidential Election and background checks is well documented by researchers. The year President Obama was elected, 2008, there were 12.7 million annual background checks. In 2015, there were 23.1 million. In the first full week following the Sandy Hook massacre (December 17, 2012 to December 23, 2012), over 950 thousand background checks were completed, the highest week ever. The second and third highest background check weeks are the two weeks immediately following the San Bernardino attack on December 4th, 2015. Smith and Wesson stock prices respond to perceived threats to the Second Amendment in a similar manner as background checks.

President Obama is hoping to reduce firearm violence with his latest executive orders, but the most likely outcome from his statement is that firearm sales will increase. Fortunately, the additional firearm purchases are unlikely to lead to an increase in firearm-related homicides. Households with a greater number of firearms may lead to an increase in firearm suicides, but even this prediction must be made with reservations. If the majority of gun sales are being made by existing gun owners that already own a lot of guns, one more gun in the household will have a negligible effect on the probability of a firearm suicide.

As the responses by policy makers to the executive orders have shown, gun control is arguably the most polarizing issue in US politics. Over the next few weeks, a lot of energy will be used to discuss an announcement that takes a marginal step towards clarifying who exactly is a firearms dealer. Gun control would probably not be such a visible issue if all it took to reduce gun violence was accurately defining what it means to be a firearms dealer.