Do gated communities contribute to increased segregation in urban areas? While the answer almost seems self-evident, there is very little empirical data available to actually measure their effect in metropolitan areas. In new research Renaud Le Goix and Elena Vesselinov investigate the relationship between urban segregation patterns and the location of gated communities in US southwestern metropolitan areas. Through an analysis of the “social distance” between neighborhoods, they find that gated communities contribute to social – but not racial – segregation, but that this effect fell between 2000 and 2010.

Since the early debates about gated communities in the 1970s and 1980s scholars and commentators have discussed the link between gating and segregation. Gated communities are built as enclaves and have physical enclosures, effectively walling off some collective urban space (parks, sidewalks, streets, common grounds, golf courses…). Legally, property rights are implemented in the form of property owners’ associations (POAs), and private governance structures are designed to exclude others (i.e. selecting residents). And socially, forms of securitization embed social strategies that facilitate the pursuit of “comfort” and social homogeneity.

Gated communities in US western metropolitan areas have accounted for a substantial part of newly built subdivisions over the last three decades, and there has been a need for empirical assessment of how they have contributed to a reshaping of suburban social dimensions by means of walls and gates. By 2000 more than 15 percent of the United States housing stock was in Common Interest Developments (CIDs) — and the number of units in these privately governed residential schemes rose from about 701,000 in 1970 to about 20 million in 2009. Only a proportion —between 12 and 30 percent in the Los Angeles region — of these private local government areas are gated.

In new research, we use a geographically referenced dataset covering metropolitan areas in the Western US to examine how gated communities shape social segregation. We use US 2000 and 2010 Census data and socio-economic data derived from them to describe the local arrangement of gated communities (ratio of gated streets to block groups). This allowed us to analyze and map local patterns of segregation (see for instance Figure 1).

Figure 1 – The social distance index, a local measure of segregation between neighborhoods in Orange County, south-east of Los Angeles (2010). 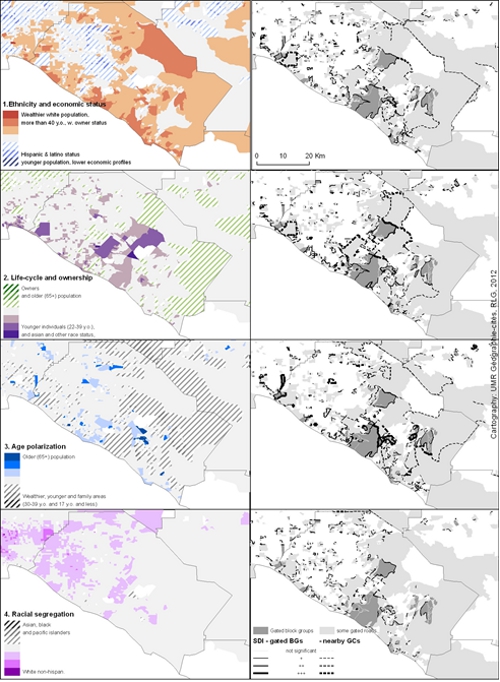 Our analysis is based on a social distance index (SDI), a standardized index that allows comparison between local segregation patterns across space and time.  The social distance index measures the level of social discontinuity between two adjacent neighborhoods, using the four dimensions of socio-economic and racial segregation previously described. As Figure 1 shows, the SDI is a measure that has been mapped as a line-segment showing the level of discontinuity between gated and non-gated nearby neighborhoods. Using this measure, our goal is to analyze the spatial distribution of segregation patterns, compared with the location of gated communities.

With this local metric we rely on the assumption that if the overall differentiations measured between gated enclaves and their vicinities are higher than the differentiations usually observed in the urban area between two adjacent neighborhoods, then there is a high probability that gated communities are producing this increased segregation. From our data, we do find higher social distance indicators between gated communities and nearby non-gated neighborhoods. As Figure 2 shows, ratios higher than 1 are found in a majority of metropolitan areas, meaning that on average higher social distances are found between a gated community and its non-gated neighbors, than between two non-gated neighborhoods. 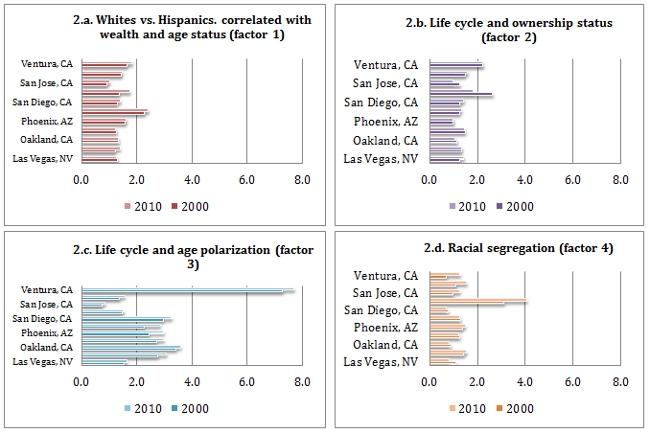 Our data shows that gated communities are significant contributors to segregation patterns at the local level, and that this trend has reinforced between 2000 and 2010. Our results are particularly significant, because they are counterintuitive when compared to general demographics. On average, segregation patterns in US southwestern metropolitan areas have slightly decreased, mostly because of more homogeneous settlement patterns of Hispanics and Latinos.

When we consider socioeconomic segregation (Factor 1, Whites vs. Hispanics. correlated with wealth and age status), this group has a social distance on average 1.5 times higher than between non-gated block groups. These trends are more accentuated in Phoenix, in San Francisco, Riverside-San Bernardino Ventura County.

More importantly, when considering life cycle and age (Factor 3, Figure 2.c), our data shows an extremely significant effect that differentiates gated block groups from other non-gated neighborhoods: San Diego, Riverside, Los Angeles, Orange, Oakland and Phoenix are good examples. The SDI for gated block groups is on average 2 to 3.6 times higher than the SDI for non-gated block groups in the metropolitan area, with a strongly reinforcing trend in almost all metropolitan areas between 2000 and 2010. Retirement communities have been very important in this process, and are well exemplified in Phoenix and in Orange counties, which both host numerous gated retirement communities such as Leisure World and similar subdivisions.

But our evidence is mixed and must be put in perspective. Segregation in US southwestern metropolitan areas has decreased between 2000 and 2010. In fact, raw measures of segregation (the absolute values of the social distance index) on average decreased during this time; gated communities contribute less to global segregation in 2010 than in 2000 (Figure 3), and this is especially true when considering racial segregation alone, in metropolitan areas like Oakland, San Diego, Riverside, Orange county or Las Vegas. This observation is related to the growing access of Hispanics and Asians to middle-class suburban residential neighborhoods (gated and non-gated), showing the effects of spatial assimilation in suburban areas. But, everything being equal, gated communities show stronger resistance than other neighborhoods to an increased income, and age social mix, and in relative terms have a higher level of social differentiation, with the exception of racial segregation, as shown in Figure 2.d. 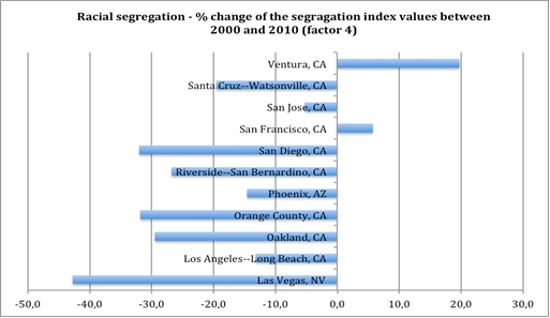 Note: Absolute values of the social distance index are on average decreasing between 2000 and 2010 (percent of change).

This blog is based on the paper, “Inequality Shaping Processes and Gated Communities in US Western Metropolitan Areas” in Urban Studies, 2015.

Renaud Le Goix – University Paris-Diderot
Renaud Le Goix is a professor at the Univ. Paris-Diderot. He is affiliated to the UMR Géographie-cités and his researches interests has focused on suburbanization and exurbanization, including spatial inequality, residential segregation, property values, segregation patterns, and the relationships between private residential governance (i.e. gated communities) and local government bodies.

Elena Vesselinov – City University of New York
Elena Vesselinov is an Associate Professor of Sociology at Queens College and the Graduate Center, CUNY. Her research has focused on urban and spatial inequality, including gated communities, residential segregation, and mixed-income neighborhoods. She is also interested in comparative urbanization, environmental justice and sustainability.