Should you be spending time at work interacting with your colleagues? In my recent working paper “Learning Spillovers in the Firm,” I show that the answer to this question is yes.  Specifically, I show that learning from more educated colleagues is an important determinant of wage growth.

To show this, I first put together a unique data set, matching all Swedish workers with their firms and their peers from 1985-2012. Using this data, I find that workers do learn from their more educated colleagues. In particular, I find that a worker who experiences an increase in the average education of his colleagues by 10 percentage points will receive (on average) a 0.3 percent increase in his wages the following year (This increase is conditional on controls for most possible sources of bias in the estimated effect. For technical details, see the full paper.). This increase is persistent, lasting at least five years into the future. While 0.3 percent may seem like a small number, it is actually a substantial increase in light of the fact that wages only increased by around 2 percent a year for the population in Sweden during the period of my analysis (The effect is likely to be larger in the US, where there is less wage compression and far fewer workers are covered by collective bargaining. In the paper, I provide some additional results that shed light on the external validity of my estimates.) Thus, an additional 0.3 percent increase in wages due to learning from colleagues comes to a quarter of the average increase in wages. Who wouldn’t want their wages to grow by 25 percent more than average?

Furthermore, there is interesting heterogeneity in the amount of learning spillovers workers obtain. As can be seen in Figure 1 below, the effect is largest for younger workers and then decreases as workers age until there is no statistically significant effect past the 40s. We would expect this pattern by age for two reasons. First, younger workers have greater incentives to invest in human capital, as they have a longer future working career in which to reap the benefits. Second, older workers may have already obtained most of the skills it is possible to accumulate, leaving little left to learn. 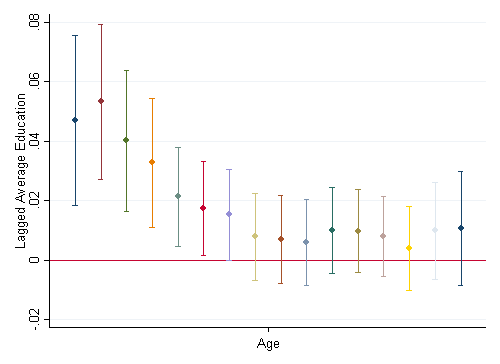 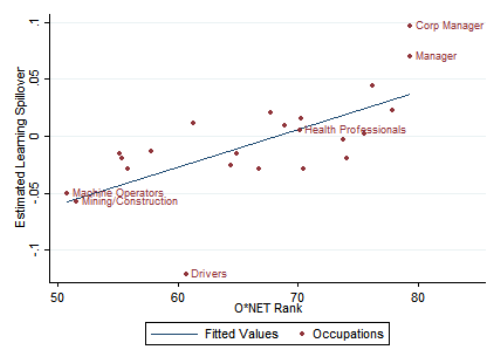 However, in my paper I also show that firms may not compensate workers who teach their colleagues appropriately. As a result, workers may fail to obtain the optimal level of education. In particular, workers may underinvest in education. This is a problem because it implies that the economy may miss out on potentially substantial increases in GDP that could occur if only workers were compensated appropriately.

At the end of the paper, I show that while at least 12.6 percent of the gain in adding a college educated worker comes from learning spillovers obtained by his colleagues, the social returns of adding a college educated worker may exceed private returns by up to 14.4 percent. In work in progress, I am exploring this gap in more detail, and what can be done about it. In particular, I am analyzing the relative merits of different policies we could implement to address this gap. Stay tuned for more on this in the coming months.

This article was originally posted on LSE Business Review, and on the website of Yale University’s Institution for Social and Policy Studies, and is based on the author’s working paper ‘Learning Spillovers in the Firm, Job Market Paper‘, Yale University December, 2015.

Emily Nix – Yale University
Emily Nix is an ISPS Graduate Policy Fellow and a  Ph.D. candidate in the economics department at Yale University. Her research explores human capital development both in and out of the labour market,