American politicians have always had a close relationship with religion, and despite the increasingly secular nature of US society, it is nearly unthinkable that a politician would openly identify themselves as an atheist. In new research, Scott Clifford and Ben Gaskins find that voters perceive religious candidates as being more trustworthy and moral and atheist candidates as less trustworthy and less moral. They write that when politicians remind people that they are religious, they are playing on Americans’ bias towards trusting and favoring the religious.

In American politics, it is almost unheard of for a politician to identify as an atheist. Politicians of both major political parties have a long tradition of using religious language, imagery, and personal religious narratives in making their appeal to voters. Barack Obama does it. So do Hillary Clinton, Ted Cruz, George W. Bush, and even Donald Trump.

The answer, we believe, has to do with implicit biases Americans have against the non-religious—specifically that religion implies trustworthiness. Those who explicitly reject religion —atheists—are among the most disliked social groups in America and recent research in psychology demonstrates that prejudice towards atheists is rooted in perceptions of their fundamental untrustworthiness and immorality.

On the flipside, economic research shows that people are more willing to trust their money to religious individuals. Naturally, religious conservatives are the most likely to associate religion with trustworthiness, but research suggests these biases are widespread, even among those who aren’t very religious themselves. As a result, when politicians remind you of their religious beliefs, they aren’t just conveying an ideological stance, but trying to convince you that they are fundamentally trustworthy and moral people—coveted traits in today’s political environment.

In new research, we examined two national polls and conducted an experiment to find out just how Americans view atheists, and whether believing a politician is religious affects how they are perceived and supported by voters. Figure 1 below shows the results from a 2007 Newsweek poll, which asked a national sample of adults whether they would be willing to vote for a political candidate who is an atheist. Only 30 percent answered affirmatively. Furthermore, 27 percent of the sample indicated that they did not believe that “someone can be a moral person and be an atheist.”

Belief that atheists cannot be moral was a powerful predictor of unwillingness to vote for an atheist, demonstrating the strong link between perceptions of moral character and vote choice. Evangelicals proved the most prejudiced towards atheists, while nearly all religious denominations, with the exception of Jews, were less willing to vote for an atheist candidate. 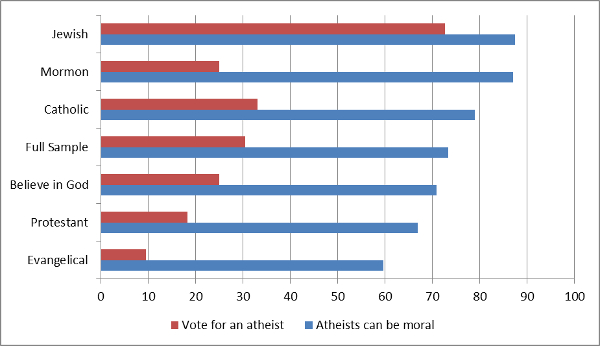 As a second test, we examined a 2007 CBS poll, which asked a national sample about their perceptions of Hillary Clinton. Specifically, the poll asked respondents about the strength of Clinton’s religious values, her honesty and integrity, and their likelihood of voting for her. Our results show that people who perceive Clinton as having strong religious values also perceive her as having greater honesty and integrity, especially among conservatives and moderates. Liberals, who are the group most likely to vote for Clinton anyway, were the only ones that did not see her religiousness as making her more honest.

We conducted a similar analysis predicting the likelihood of voting for Clinton. Our results show that perceiving her as having strong religious values were more willing to vote for her. Again, this effect was strongest among conservatives, but even gave her a bump among liberals. Finally, we saw evidence that it is perceptions of her honesty and character that drive this latter effect. Perceiving her as religious leads people to see her as more honest and trustworthy, which in turn leads to a greater willingness to vote for her. For other candidates, we found that being perceived as religious increases voter support and perceptions of honesty for both Democrats and Republicans. Clearly, portraying oneself as religious is a good campaign strategy.

All of our previous evidence was observational, so we sought out experimental evidence that religiosity has a causal effect on perceptions of trustworthiness and vote choice. For this final study, we asked respondents in a convenience sample to evaluate a fictional political candidate. All respondents were given a brief biographical description of the candidate, but the candidate was randomly described as an atheist, as strongly religious, or no information was given about his religious beliefs. His partisanship was also randomly assigned as either Democratic or Republican. Our experiment reveals a number of interesting findings.

Overall, our research provides evidence that religious cues by politicians do more than just signal ideological leanings. They also appeal to a common belief in America that the religious are more trustworthy and moral than the non-religious. Thus, by displaying their religious credentials, politicians are also trying to signal their trustworthiness and moral character—traits that are in high demand among voters.

As a result, it is exceedingly rare to see a national American politician openly identify as an atheist. In fact, the only example of which we are aware is former representative Pete Stark from California, who was defeated for re-election in 2012. Even if politicians aren’t particularly religious personally, it would be quite risky to declare themselves a non-believer.

We can’t say that the benefits of candidate religiousness accrue to all religious backgrounds equally—for instance, will a Muslim politician who is seen as religious be more trusted than a non-practicing Muslim? But despite the fact that America has become increasingly secular and pluralistic, it remains the case that Americans generally trust religious people more than the non-religious, and apply this to their political candidates. Thus, politicians of all stripes will find it desirable to use religious language and identify with an acceptable religious tradition. For now at least, the political benefits of religion far outweigh any costs.

This article is based on the paper, ‘Trust Me, I Believe in God: Candidate Religiousness as a Signal of Trustworthiness’, in American Politics Research.

Ben Gaskins – Lewis & Clark College
Ben Gaskins is an Assistant Professor of Political Science at Lewis & Clark College in Portland, Oregon. His research focuses on the effect of religion on social and economic attitudes, as well as the role of religious commitment on political knowledge, voting, and media usage. His research has been published in journals including the American Journal of Political Science, the Journal of Politics, and Politics & Religion.

Scott Clifford – University of Houston
Scott Clifford is an Assistant Professor of Political Science at the University of Houston. His research focuses on how morality, emotion, and other psychological factors affect political beliefs and attitudes. His research has been published in journals including the Journal of Politics, Public Opinion Quarterly, and Political Behavior.