While the US is in the midst of economic recovery, 16 million children still live in families with incomes below the federal poverty level, and that number is increasing. How can we explain and tackle these growing levels of child poverty? In new research Maia Call looks at the role of time and geography in child poverty, finding that despite the massive social and economic changes of the past two decades, child poverty is linked to poor employment opportunities and certain types of extractive industries in specific places. Her results, she argues, show that place-based policies designed to encourage job creation and tackle unemployment remain an important part of the policy mix.

In recent decades, the United States has emerged as one of the few developed countries where high per capita income has become juxtaposed with a persistently high rate of children living in poverty. A recent United Nations Children’s Fund report on the well-being of children in 29 developed nations ranks the US as 28th, above only Romania. Today, 16 million children live in families with incomes below the federal poverty level. While the US is currently in a period of economic recovery, a larger number (and proportion) of children live in poverty today than in 2010, at the height of the recent recession. The reasons for the continued increase in child poverty during the economic recovery are poorly understood, suggesting that there continues to be much we do not know about the underlying drivers of child well-being.

These impoverished children are not randomly scattered across the country. Rather, certain regions of the United States bear an unequal share of this burden, and have done so for many decades. The Mississippi Delta, Appalachia, Texas borderlands, several Native American tribal lands in the Midwest, and the crescent of counties marking the old ‘‘Cotton Belt’’ are among the largest regions of persistent poverty.

Along with spatial effects, and cultural and demographic shifts over time, past research has associated a number of sociodemographic and economic elements with child poverty. High levels of unemployment may increase childhood poverty by lowering household earning potential. Likewise, counties with higher rates of female-headed households may have higher child poverty for similar reasons, as female-headed households rarely include two wage earners and women continue to earn less than men for identical jobs. Low educational achievement is strongly related to lowered lifetime earning potentials. An area’s industrial structure (e.g. extractive, manufacturing) has been linked in complex ways to poverty, suggesting that this relationship depends on the regional context.

In new research using county-level Census and American Community Survey data from the forty-eight contiguous United States, Dr. Paul Voss and I looked at the impact of time, viewed here as a proxy for the profound cultural and demographic shifts that occurred during the years between 1990 and 2010, on previously established relationships between child poverty, spatial effects, sociodemographic characteristics, and economic processes. We found that over two decades of immense social and economic change, there was little movement in the existing strong spatial clustering of child poverty and its associated characteristics.

For the first part of our analytic approach, we estimated cross-sectional spatial regression models for each of our three reference dates, 1990, 2000, and 2006-2010. Regression controls for the spatial forces at work in our data enabled us to see relationships among the variables that may otherwise have been obscured by spatial clustering. We saw a fair amount of stability in the factors impacting child poverty during this time period, suggesting that the immense changes in the US economy did little to alter the fundamental relationships present in our model. 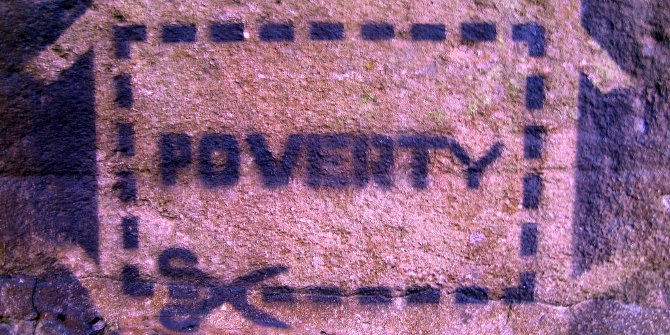 We find that unemployment rate is a strong predictor of child poverty throughout the time period, and the unemployment rate in neighboring counties also increases poverty in a county, suggesting the influence of lowered opportunities for market work through commuting. Similarly, high proportions of female-headed households with children and lower aggregate educational achievement levels are significant positive predictors of child poverty.

Though the economic factors were not as strong predictors as the household characteristics, higher proportions of employment in extractive industries (e.g. farming, mining, and fishing) are related to higher child poverty rates. Conversely, having a higher proportion of the county, or neighboring county, labor force in manufacturing industries is predictive of lower rates of child poverty. It is notable that counties which neighbor a county with a high proportion of extractive labor are predicted to have lower, rather than higher, child poverty rates. This may arise because these counties perform higher order services utilizing natural resources extracted nearby.

Our results reveal the importance of jointly acknowledging both temporal changes and spatial clustering in regression models. In the case of child poverty, it is clear that spatial influences overwhelm cultural and demographic shifts during this time period. The findings further confirm what already is a well-established consensus for programs aimed at addressing poverty in the US: regardless of the effectiveness (or not) of public policy programs designed to reduce high levels of poverty by focusing on individual household assistance, place-based policies focusing on such matters as job creation and tackling high unemployment must remain part of the policy mix.

Maia Call – University of North Carolina at Chapel Hill
Maia Call is a PhD Student in the Department of Geography at the University of North Carolina at Chapel Hill, as well as a pre-doctoral trainee at the Carolina Population Center. Her current research examines the relationship between environmental factors, social determinants, and rural livelihood decision-making in the developing world. Her research has been published in Environment and Planning A.