Donald Trump is attracting authoritarian primary voters, and it may help him to gain the nomination.

Donald Trump is attracting authoritarian primary voters, and it may help him to gain the nomination.

With the first primaries of the 2016 presidential election cycle looming, many in the Republican Party are becoming increasingly concerned that billionaire Donald Trump will actually be able to gain the party’s nomination, leading the party to an electoral disaster in November. Using a new national survey of American voters, Matthew C. MacWilliams finds that these fears are well-founded. Trump’s strongman rhetoric has activated and energized American authoritarians to his candidacy providing him with a large and loyal base of supporters in the upcoming Republican contests. An inclination towards authoritarianism is a major predictor of people’s likelihood of voting for Donald Trump in a way that it is not for any of the other GOP candidates. Moreover, Trump voters are ready to suspend constitutionally guaranteed rights such as Habeas Corpus, reject the protection of minority rights, and support the abridgment of religious freedom through the closure of mosques across the US.

In her recent State of the Union response to President Barack Obama, South Carolina’s Republican Governor Nikki Haley warned her party and the nation to resist the temptation “to follow the siren call of the angriest voices.” The angry soloist to whom Governor Haley was referring is Donald Trump. As my recent national survey of 1,800 American voters reveals, Governor Haley’s caution is well founded.

Trump’s strongman siren call has electrified Americans disposed to authoritarianism, rallying them to his banner as they follow his lead. As Trump joked last weekend, “I could stand in the middle of Fifth Avenue and shoot somebody. And I wouldn’t lose any voters, OK. It’s like incredible.”

My survey, conducted under the auspices of the University of Massachusetts Amherst, uses a simple battery of four questions to identify authoritarians. These are the same questions that leading political scientists — including Marc Hetherington, Jonathon Weiler, and Karen Stenner — have employed since 1992 to measure individual disposition to authoritarianism. The results of my poll show that authoritarianism is one of only two variables that is a statistically significant predictor of Trump support among likely Republican primary voters. The other variable is fear of terrorism. Other variables included in the model are sex, educational attainment, age, church attendance, evangelicalism, ideology, race, and income.

The authoritarian inclinations of Trump voters are abundantly clear when the predicted probability of supporting Trump is arrayed across the authoritarian scale (Figure 1).

Figure 1 – Support for Trump by Authoritarianism 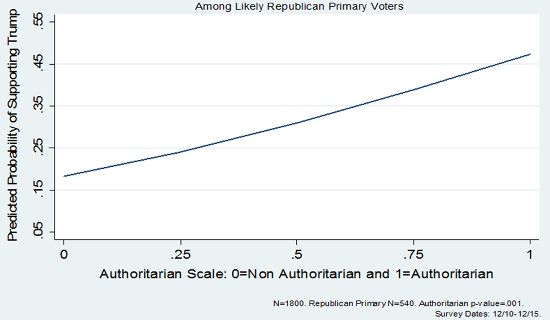 When it comes to authoritarianism, Trump supporters are also distinct in their attitudes from the followers of the other Republican candidates for president. Support models for Ted Cruz, Ben Carson, Marco Rubio, and Jeb Bush that are run among likely Republican primary voters and include the same set of independent variables tested for when analyzing Trump find that authoritarianism has no effect on support for Trump’s opponents. 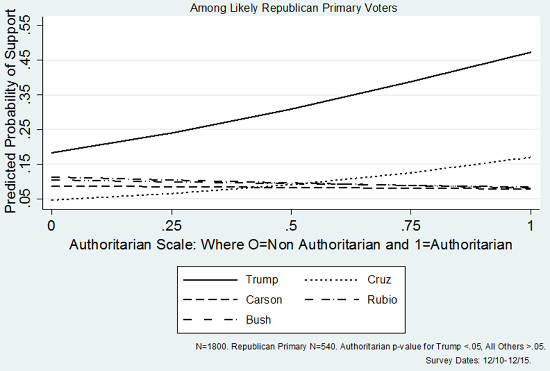 Several questions in my survey were designed to test for authoritarian behavior. These questions spring from a robust literature that begins with Fromm’s aptly named Escape From Freedom, spans seven decades and details both authoritarians’ fear of “the other” and antipathy for Madisonian democracy and the protection of minority rights from majority tyranny. As such, the questions probe survey respondents’ attitudes toward bedrock Democratic values that are the foundation of constitutional government and civil society.

On most of these questions, Trump voters exhibit statistically significant and substantive authoritarian attitudes. For example, Trump voters are statistically more likely to agree that other groups should sometimes be kept in their place. They support preventing minority opposition once we decide what is right.

Trump supporters kick the fundamental tenets of Madisonian democracy to the curb, asserting that the rights of minorities need not be protected from the power of the majority. And they are statistically more likely than Trump opponents to agree the President should curtail the voice and vote of the opposition when it is necessary to protect the country – though a plurality still opposes this exercise of presidential power.

Trump voters are also ready to suspend the constitutionally guaranteed Writ of Habeas Corpus by empowering the police and law enforcement to arrest and detain indefinitely anyone in the United States who is suspected of belonging to a terrorist organization. And, as you would suspect, Trump supporters agree that mosques across the United States should be closed down – a clear abridgement of the religious freedoms guaranteed in the First Amendment of the Bill of Rights (Figure 3). 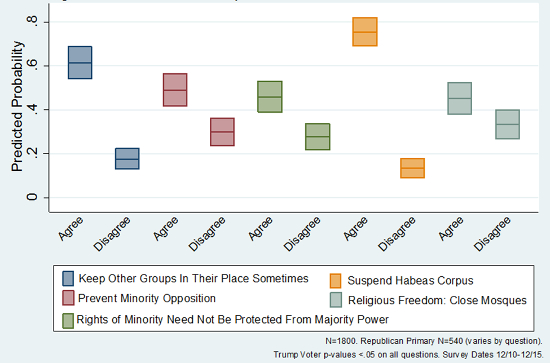 Last week the National Review, which some pundits consider the American conservative movement’s most influential publication, warned that Trump was “a free-floating populist with strongman overtones.” My data indicates that the 20 conservatives who argued Trump must not become the Republican nominee got their description of him half right. His rhetoric is that of a strongman’s. But his doctrine isn’t populism, it is authoritarianism. The difference is quite important and may explain why Trump’s Teflon candidacy continues to exceed conventional expectations.

After analyzing 14 years of national polling data from 1992 to 2006, Hetherington and Weiler concluded that authoritarianism was driving political polarization in America. While authoritarians can be found among self-identified Democrats and Independents, their slow but steady movement over time to the Republican Party may have created the conditions for a candidate with an authoritarian message like Trump’s to emerge.

Trump’s support is firmly rooted in an American version of authoritarianism that, once awakened and stoked, is a force to be reckoned with. And until quite recently, the institutions and leaders tasked with guarding against what Madison called “the infection of the violent passions” among the people have either been cowed by Trump’s bluster or derelict in performing their civic duty. Trump’s authoritarian support may be too solid and his momentum too strong to stop his march to the Republican nomination.

Matthew C. MacWilliams – University of Massachusetts, Amherst
Matthew C. MacWilliams is a PhD Candidate at the University of Massachusetts Amherst. He is President of MacWilliams Sanders  a political communications firm. His research interests including campaign communications, social media, political behavior, authoritarianism in American politics, constitutional law and judicial behavior, the Supreme Court, the political of climate change, interest group lobbying of the judiciary, and election forecasting.