In the past six years Memphis, Tennessee has undergone a cycling revolution, creating more than 100 miles of bicycle lanes and greenways. Despite the beneficial environmental implications of such a scheme, is bike oriented development just a way of reinforcing the status quo of social inequality? Kevin T. Smiley, Wanda Rushing, and Michele Scott find that while such bike schemes are likely to spur economic development and raise property values, these economic benefits are most likely to go to developers and may result in further racialized gentrification.

How do investments in bicycle infrastructure affect social inequality? Since 2010, Memphis, Tennessee has rapidly changed its reputation for being one of the worst cities for bicycling in the United States to one of the best. The city went from having almost no bicycling infrastructure six years ago to a more than 100 mile network of bicycle lanes and greenways, connecting diverse urban and suburban communities. Bicycling magazine upgraded Memphis to one of its most improved cities in 2012 just two years after naming it one of the worst. By this summer, an additional $30 million of investment will revamp a pedestrian walkway on a century-old railway bridge across the Mississippi River.

But the Mississippi River, which divides Tennessee from Arkansas is not the only divide being challenged by bicycling. Policymakers and activists find themselves facing institutionalized poverty and racism in the majority African American city with a quarter of residents in poverty, including a third of all black residents. Is bicycling the great equalizer, or another example of urban development that reaffirms the status quo?

We sought out to see how change makers – in government, in non-profits, and on two wheels – characterized, fought for, and emerged victorious in changing the city from a place where bicycling was an afterthought to a city that now regularly scores bicycling accolades. What were they fighting for? Our analysis suggests that they desire deep changes to the city, but that efforts may fall short because bicycling can be used as a tool of conventional economic development, gentrification, and business-as-usual politics. 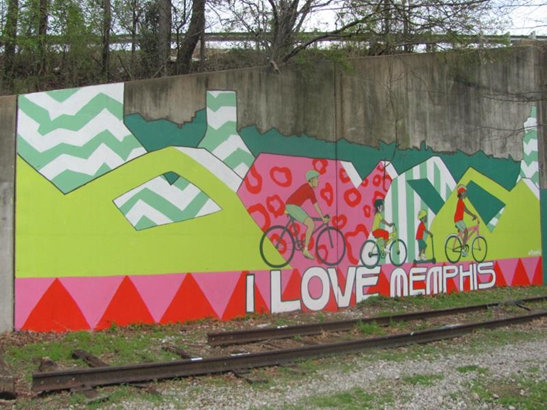 A mural decorates a concrete wall a few yards away from the city’s most popular greenway, the Shelby Farms Greenline. Photo by Kevin T. Smiley, Summer 2011. 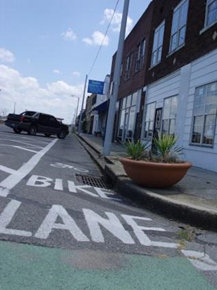 An early photo of the first bicycle lanes on Broad Avenue. They have helped to spur the success of a newly formed arts district. Photo by Kevin T. Smiley, Summer 2011.

We found that power players and citizens in favor of the bicycling changes started with one key frame: the need to make Memphis better. The city sits at a crossroads between urban and rural, and black and white. This confluence has produced astounding achievements – Memphis is the birthplace of rock n’ roll, and has the second largest cargo airport in the world – but also has meant a deep history of racial inequality across many social metrics like housing, wealth, and education. Many talked about a decades-old negative conception of the city.

Change is possible, according to bike enthusiasts. Bicycling advocates organized rallies, conducted “bike lane buy-in” days at pro-bike lane businesses, and packed city government meetings. As one cyclist wrote in a letter-to-the-editor, ‘[Memphis is] emerging from the doldrums of negativity and nay-saying and embracing a wonderful ‘can do’ attitude.’ Politicians on both sides of the aisle eagerly lined up behind the new successes and popularity of bicycling initiatives. ‘On a scale of one to ten,’ a city council member said, ‘I think [a popular greenway] turned out to be a 12.’ An op-ed in the city’s newspaper perhaps best summed up the new feeling of bicycling advocates: ‘Spandex and bicycle helmets may very well be the true equalizer.’

But the question remains: who are elites making the city better for: current low-income residents, or future middle- and upper-middle class residents that might help reimage the city’s past?

The way in which local change agents fought for bicycling emphasized frames that both sought to upend negative perceptions of the city and its inequalities but also supported economic development strategies that would do little to ameliorate inequalities. Petitioners to the city government in favor of a controversial change to add bicycle lanes on a city street saw the primary benefits in attracting classic creative class spots in which to live, work, and play. A neighborhood located in downtown Memphis, already experiencing racial gentrification, saw more land bought up by developers building high-end apartments—directly along proposed bike routes to the city’s coming pedestrian bridge. A mismatch emerged: the city may have a better brand that it can sell to tourists, more well-off residents, and bicycling advocates, but these changes have little to say about rising rents, business turnover, or the necessary centrality of race relations in local conversations.

Research on the recent rise worldwide in bicycling is budding, and much of it emphasizing inequalities in uneven development associated with bicycling, how bike share programs fail to meaningfully reach poorer residents, and the gaps in popular support for bike and pedestrian infrastructure by race. More broadly, cities across the world are vying to re-brand themselves in an increasingly global era, but do so against the backdrop of decades or centuries of history. Many see bicycling as a ticket to ride.

How successful bicycling proves to be will depend on the metrics used to evaluate our cities’ bike-and ped-friendly changes. It centers on the important thread we analyzed for Memphis: if the benefits are intended to improve the city, who do these benefits serve the most? Bicycling will likely spur economic development and raise property values, but our research suggests that these economic benefits head to developers and may result in further racialized gentrification. It may raise ridership, but will ridership rise at equal rates for women and people of color as it does for the most popular biker users: white men? And will the rise in ridership be large enough to change the prevailing car-centric urban form, or decrease local carbon footprint? According to 2014 American Community Survey figures from the U.S. Census, only 0.3 percent of Memphis residents regularly took a bicycle to work. While answers to these questions are emerging in cities worldwide, we pair intriguing developments in Memphis alongside critical realities.

This article is based on the paper, ‘Behind a bicycling boom: Governance, cultural change and place character in Memphis, Tennessee’, in Urban Studies.

Wanda Rushing – University of Memphis
Wanda Rushing is a Professor of Sociology at the University of Memphis. She is author of Memphis and the Paradox of Place: Globalization in the American South (North Carolina, 2009); editor of volume 15, Urbanization, of The New Encyclopedia of Southern Culture; and, she has published articles in Urban Studies, Urban Education, City & Community and other journals.

Michele Scott – North Carolina State University
Michele Scott is a PhD student in the Department of Sociology and Anthropology at North Carolina State University. Her research primarily focuses on food, especially as it relates to health, identity, and local cultures. She is the author of “Barbecue Tofu and the Most Southern Food on Earth” and the forthcoming, “Eschew Your Food: Foodies, Healthism and the Elective Restrictive Diet.”