Up to now, many political scientists and commentators have argued that support for Donald Trump is ‘capped’, given that he and Senator Ted Cruz (TX) are competing for the same pool of anti-establishment voters. Using new survey data from South Carolina Republican voters, Matthew C. MacWilliams finds that, along with concerns about terrorism, authoritarianism is a major predictor of people’s support for Donald Trump, and not a predictor of support for Ted Cruz. With these findings in mind, he argues that so long as people are concerned about outside threats – concerns which Trump is stoking – his support will continue to grow.

With Donald Trump’s victories in South Carolina and Nevada, America’s Authoritarian Spring is now in full bloom. Trump’s rise has raised questions about a current political science theory that describes how the presidential nomination process works and continues to bedevil pundits who argue Trump’s vote share is capped and his voters come from the same anti-establishment “lane” as Senator Ted Cruz.

Let’s take a look at all three of these issues.

First, in their book The Party Decides, leading scholars of American politics argue that political party insiders, defined quite broadly, exert considerable influence over the presidential nomination process, starting with “invisible primaries” and continuing to actual primary nominating contests where votes are cast and delegates are selected. In the Republican nominating process this year, at least so far, party insiders are not in control of the process. American authoritarian voters are and their candidate of choice is Donald Trump.

The survey was conducted over the last five days leading up to the GOP primary. It predicted Trump would win 33.3 percent of the vote in South Carolina and forecast a second place showing by Rubio. Its findings mirror the results of the national survey conducted under the auspices of the University of Massachusetts Amherst reported here last month.

The importance of authoritarians to Trump’s success is readily apparent in the chart below which arrays predicted probabilities of supporting him, Senator Ted Cruz, and Senator Rubio across the authoritarian scale. 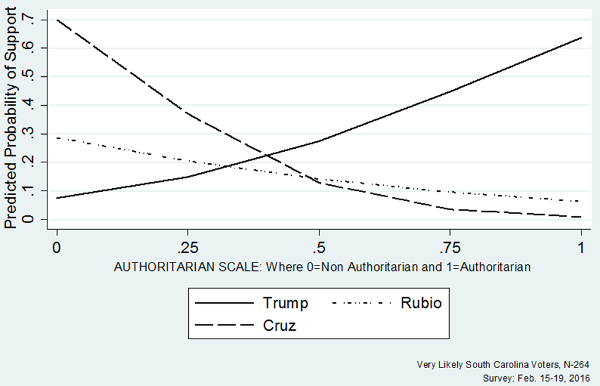 This chart also captures a fallacy at the core of the pundits’ contention that Trump and Cruz are running in the same anti-establishment  “lane” and, as such, competing for the same voters. Trump and Cruz may be in the same lane, but there is a big yellow line that divides it right down the middle.

Finally, the second statistically important predictor of Trump’s support in South Carolina was a variable that links authoritarianism and those who are more likely to worry that they or someone in their family will be a victim of terrorism. This connection, or negative interaction, between perceived threat and authoritarian behavior was first identified by Hetherington and Weiler.  Its influence on political behavior, when threat is defined as personal fear of terrorism, was demonstrated by Hetherington and Suhay in 2011 in their article in the American Journal of Political Science.

The practical implication of a negative interaction between increasing perceptions of threat and authoritarianism is that those who are not strong authoritarians behave in a more authoritarian manner when confronted by threat. This is exactly the behavior found among South Carolinian supporters of Trump. Voters who were more likely to fear terrorism were also more likely to vote for Trump even though they were not predisposed to be the strongest authoritarians. 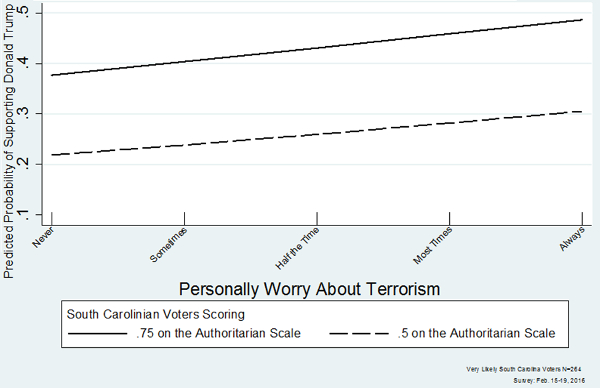 These results should be a big red flag to those who argue Trump’s support is capped. It is not. Fear of threats from “the other,” is also a significant driver of Trump’s support. As Trump expands his litany of threats facing America to include economic threats from the Chinese, Vietnamese, Mexicans, and other “others” he “likes,” the appeal of his authoritarian message reaches a broader audience spanning partisan lines. Union voters and other classic Democratic defectors – identified first by Greenberg in the 1980s – become prime targets for Trumpism, as threats from terrorism, immigration, the economy, and to jobs are combined into one systemic threat to America – a threat which, in Trump’s estimation, can only be met by strongman Trump.

The implications of authoritarianism, threat, and the interaction of threat and authoritarianism in the general election, if Trump wins the Republican nomination, should not be underestimated. Those Democrats who think Trump will be an easy opponent to defeat in November may be whistling past the graveyard, resembling the Republican establishment and commentators who dismissed and ignored his candidacy for too long.