More than 80 percent of Americans live in urban areas, and cities are the source of much of the country’s economic activities. But to what extent do cities drive economic growth, and how dense do they have to be? In new research which examines 50 US metropolitan areas with more than 1 million people, Patricia Melo finds that an increase in urban employment density – or agglomeration – by 10 percent is associated with a rise of approximately one percent in average worker productivity, but that these benefits are very localised in terms of distance as measured by travel times.

The idea that the spatial concentration of economic activities drives economic growth is not new (in fact it is as old as Alfred Marshall’s work on Principles of Economics in the late 19th century), and evidence in its support is pervasive both across the developed and developing world. The technical jargon used by economists to describe these benefits is ‘agglomeration economies’, that is, the benefits arising from both people and firms locating near each other. The workings of cities are such that they make the interactions between people and firms more efficient. In a nutshell, cities facilitate a higher quality matching between jobs and workers’ skills, better specialisation, higher levels of human capital, and knowledge.

In new research I investigate the agglomeration-growth effects for the 50 largest metropolitan areas (with more than 1 million inhabitants – see Figure 1) in the US to provide further insights on some of the key questions posed by both regional scientists and policy makers:  How far and wide do the agglomeration-growth effects spread and how quickly do they fall away over distance? Is there an optimal urban size beyond which the benefits from spatial agglomeration are outweighed by the negatives effects of becoming too large?

Finding answers to these questions is important because it can help governments around the world decide whether they should promote greater spatial concentration of activities in cities, and if so, how they should design their policies in order to maximise the positive effects, and minimise the negative effects, of additional urban agglomeration. 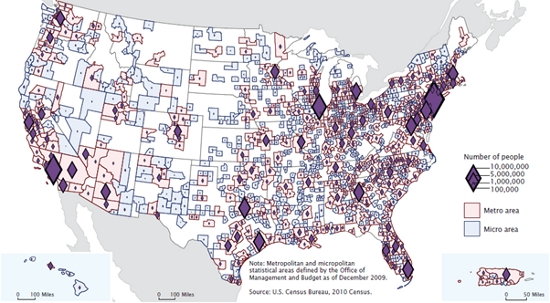 Economists generally regard higher wages as a reflection of higher productivity levels and, consequently, as a measure of economic success. Therefore, higher wages in urban areas (even after discounting the effect of higher cost of living) should reflect higher levels of labour productivity in cities. The positive relation between labour productivity and urban agglomeration has been observed for many countries and is illustrated in Figure 2 for the 50 largest metropolitan areas in the United States. The figure shows a clear positive association between the size (measured in terms of employment density) of the metropolitan areas and average worker productivity (represented by wage rates).

Figure 2 – The productivity-agglomeration relation for US metropolitan areas 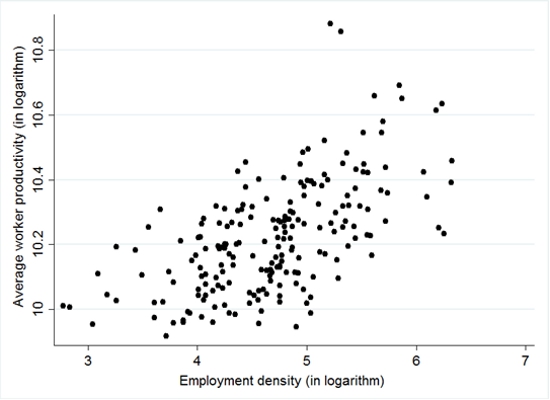 One of the key reasons why urban areas have higher labour productivity levels, as explained earlier, is that cities are magnet-like attractors of human capital and skilled workers. The strong and positive association between urban size and human capital – also known as human capital externalities – is mirrored in Figure 3. The key point here is that being surrounded by smart people makes each individual smarter and more productive due to positive knowledge spill overs. This magic-like phenomenon is not restricted to formal education but also other more informal forms of knowledge and idea sharing, which in turn have been shown to stimulate creativity and innovation. This is also why knowledge-based and innovation-driven industries tend to be clustered in the largest metropolitan areas – as shown in Figure 4.

Figure 3 – The productivity-human capital relation for US metropolitan areas 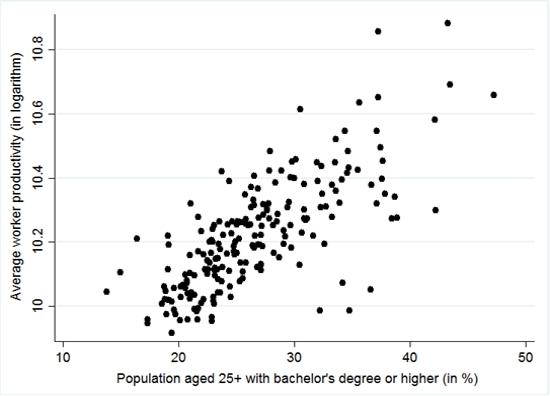 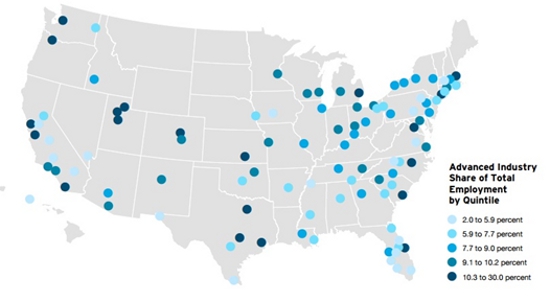 To quantify the importance of urban agglomeration economies on labour productivity, I developed statistical models using time series data for the 50 largest US metropolitan areas over the four-year period between 1990-1995-2001-2009. The models allow separating the relative effect of the different factors affecting labour productivity, particularly those relating to urban agglomeration (Figure 2) and human capital (Figure 3).

I find that increasing the level of urban agglomeration by 10 percent is associated with a rise of approximately one percent in the average worker productivity for the 50 largest US metropolitan areas. The large majority of these benefits are very localised across space and generally occur within 20 minutes driving time. Figure 5 summarises the drop off of agglomeration-productivity effects as distance increases for the 50 largest US metropolitan areas analysed. 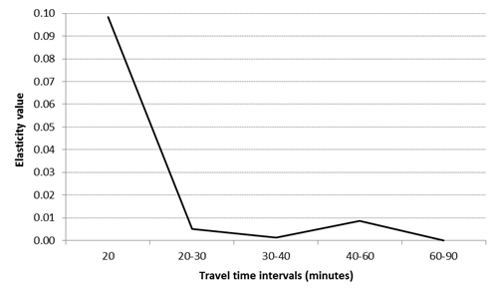 Finally, I do not find significant evidence that the negative effects from becoming too large (i.e. diseconomies of agglomeration relating to congestion, pollution, etc.) outweigh the benefits of agglomeration economies for the 50 largest metropolitan areas in the United States. The balance between the positive and negative effects of increased urban agglomeration does not seem to penalise the very large metropolitan areas. So, overall, these are good news not only for large cities and the urbanities that inhabit them, but also for their countries.

My results highlight the importance of agglomeration economies and human capital externalities for the United States economy, and show how (the largest) metropolitan areas have positively contributed to the enhancement of labour productivity. Evidence of very localised benefits from urban agglomeration economies suggests to governments and policy makers that improving accessibility levels within metropolitan areas (e.g. improved transport connectivity to the urban core(s) of metropolitan areas) is crucial to maintain the productivity gains from increased spatial concentration.

This article is based on the paper “Agglomeration, Accessibility, and Productivity: Evidence for Large Metropolitan Areas in the US”, Urban Studies.

Patricia Melo – James Hutton Institute
Patricia Melo is a senior researcher in the Social, Economic and Geographical Sciences (SEGS) research group at the James Hutton Institute, Scotland. Her main research fields are economic geography and transport geography, with a particular focus on the understanding of the relationships between spatial agglomeration, socio-economic performance, transport provision, and travel demand. Her research has been published in peer-reviewed journals such as Regional Science and Urban Economics, the Journal of Economic Geography, Urban Studies, and Regional Studies. Twitter @pcmelo81