Colorado’s move to the New Energy Economy offers lessons on the challenges facing the US transition away from coal towards renewables.

Colorado’s move to the New Energy Economy offers lessons on the challenges facing the US transition away from coal towards renewables.

While climate change is one of the most pressing issues facing the US and the world, efforts towards transitioning away from fossil fuels are often deeply political, as last month’s ruling by the US Supreme Court stalling the implementation of President Obama’s Clean Power Plan shows. In new research, Michele Betsill and Dimitris Stevis look at Colorado’s political transition to a New Energy Economy in the late 2000s as an example of the complex politics of how such transitions can be achieved. They write that Colorado’s experience shows that building a counter-coalition against entrenched interests requires compromises in how goals are articulated by campaigners, and in the policies that are pursued.

Addressing climate change will require transformations in how society produces and uses energy, but as the US Supreme Court’s recent decision to halt the implementation of the Obama Administration’s Clean Power Plan demonstrates, energy transitions are deeply political. Moving to a low-carbon future is not just a technological challenge. Academic research on “socio-technical transitions” highlights the ways in which technologies are embedded in a broader social context and sustained by powerful alliances so that any attempt to move from one energy system to another will require significant social as well as technological change. Those who benefit from the current system can be expected to protect their position by mobilizing against transition efforts. In the case of the Clean Power Plan, it is not an exaggeration to suggest that an alliance of the coal industry and its Republican supporters has managed to block (at least temporarily) a policy that would benefit natural gas more than any other source of energy.

Our recent research on Colorado’s “New Energy Economy” (NEE) highlights the political dynamics of socio-technical transitions and can serve as a laboratory for understanding the US’ current debates over the Clean Power Plan. Between 2007 and 2011, Governor Bill Ritter led an effort to transition the state’s energy economy through a set of initiatives, including dozens of pieces of legislation, organizational and administrative changes, and various voluntary initiatives developed and funded by the State. By the end of 2014, Colorado’s electricity generation from renewables had increased to 18 percent (from virtually nothing) and the state is on-track to meet its 30 percent Renewable Energy Standard (RES) by 2020. We explored the political process that led to the adoption of the 30 percent RES in 2010, which is often held up as the crowning achievement of the NEE and provides a window into the politics of socio-technical transitions.

Colorado’s energy transition started with a number of failed efforts in the early 2000s to adopt an RES in the state legislature. Eventually, advocates decided to bypass the legislature through a ballot initiative – a practice well known in Colorado. Amendment 37 passed in 2004 thanks to a Colorado-style “Baptist and bootlegger” coalition, bringing together environmentalists, green business and conservative Republicans motivated by the promise of economic gains from the siting of wind turbines in economically depressed rural areas. The Amendment provided for a 10 percent RES for Investor-Owned Utilities and passed despite strong opposition from Xcel Energy, the State’s main electricity provider. 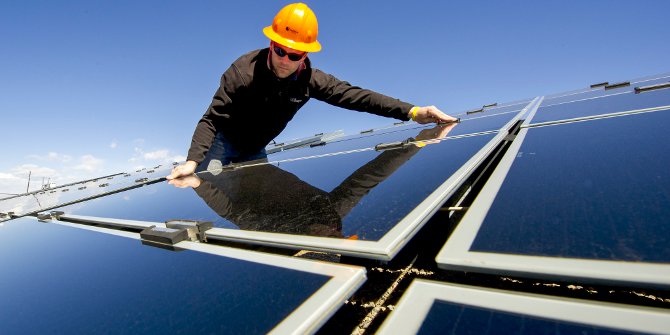 Motivated by the passage of Amendment 37, the “New Energy Economy” became a central theme in Ritter’s 2006 gubernatorial campaign. Once elected, the Administration took advantage of the political support created by the Amendment 37 campaign and Ritter’s vision of the NEE to increase the RES to 20 percent and to bring forth additional policy changes intended to deepen the role of renewables in the state’s energy mix but, also, to attract green manufacturing. The increase to 20 percent was painless because Xcel had decided that renewables offered good opportunities and both houses of Colorado’s state legislature were controlled by Democrats. The administrative changes to state government, however, intended to strengthen health and environmental rules with respect to hydraulic fracturing (fracking), met resolute opposition from the oil and gas industry, including workers and communities depending on oil and gas development. The Administration succeeded in rewriting the rules in 2008 but the process created hard feelings between the Ritter Administration and the oil and gas sector.

This series of developments, along with declining support for Democrats in Colorado and findings that Xcel was in violation of the federal Clean Air Act, altered the political landscape for the NEE and produced an important compromise that has subsequently shaped the state’s energy transition. In a major shift, Governor Ritter announced in a July 2009 speech that natural gas was ‘mission critical’ to the state’s energy transition, thereby enrolling the oil and gas sector in the NEE alliance (in earlier articulations of the NEE, natural gas had been presented as a ‘bridge fuel’). Xcel supported this shift because natural gas provided the most convenient way to comply with federal standards under the Clean Air Act. Environmentalists and green business, while sceptical of the new alliance between Ritter and the natural gas sector, were brought on board because of the prospects of a higher RES. In the end, this coalition proved too strong for the coal industry. The end result was a policy that raised the Renewable Energy Standard to 30 per cent (second only to California’s which was 33 percent until recently) but, also, a long-term lock-in for natural gas through a separate policy, the Clean Air Clean Jobs Act, which mandated that 900 MW of coal-based power be retired from Colorado’s electricity system. As part of the compromise Xcel committed to close one coal plant, convert two units in existing coal plants to natural gas and build a new natural gas plant; the whole process to be completed by 2018.

The New Energy Economy case highlights the centrality of political dynamics in shaping the trajectory of energy transitions and how that trajectory can shift in the course of the transition process as coalitions and shared visions over transition goals shift over time. In Colorado, these political dynamics played out around policy innovations, such as the RES, rather than the adoption of any particular technologies. The debates about the RES demonstrated that the articulation of what a new energy future entails was contested and transformed as new actors became enrolled in the coalition to challenge the dominant energy system. What many initially saw as an environmental project to advance the deployment of renewable energy in support of climate protection ultimately turned into an economic program to move away from coal through a combination of natural gas and renewables.

In that sense, there was a dual movement in the trajectory of Colorado’s energy transition as it unfolded. First, there was a movement away from the environment as a central goal in a tightly coupled combination of economic and environmental strategies. Increasingly, economic priorities came to dominate and economic policies were assumed to serve environmental goals. Second, in enrolling the oil and gas sector into the NEE coalition, the trajectory shifted from its earlier focus on renewable energy, and its implications for green production and consumption, to a more conventional form of extractive energy economy with potential adverse impacts on the climate, limited backward and forward innovation linkages, and aggravated local boom and bust cycles. These changes were reflected in the shift of the normative narrative of the NEE to one in which the transition to a low-carbon energy system is now more of a collateral benefit than a central goal.

The politics of energy transitions in the US cannot be understood solely in terms of a long-term conflict between renewables and fossil fuels. As in Colorado, the national debates are characterized by contestations within and across these sectors. The need to craft a counter-coalition to the entrenched interests of the coal industry and fossil fuels, in general, requires appropriate compromises in how the goals of an energy transition are articulated as well as the types of policies adopted. Neither the NEE nor the Clean Power Plan mandate the use of natural gas over renewables, but in failing to mandate renewables over natural gas, both policies enhance the likelihood that natural gas will be a key energy source for the future as the country moves away from coal. The forthcoming battle over the implementation of the Clean Power Plan will put this counter-coalition to the test and may involve additional compromises reinforcing America’s transition to a natural gas-led energy future.

This article is based on the paper, ‘The politics and dynamics of energy transitions: Lessons from Colorado’s (USA) “New Energy Economy”’, in Environment and Planning C: Government and Policy.

Michele Betsill – Colorado State University
Michele Betsill is Professor and Chair of Political Science at Colorado State University where she teaches courses on international relations and environmental politics. Her research examines the governance of global environmental issues from the global to the local level across the public and private spheres, which a particular focus on the politics of climate change. Her most recent books include Transnational Climate Change Governance (co-authored with the Leverhulme Network on Transnational Climate Governance, Cambridge, 2014) and Advances in International Environmental Politics, 2e. (co-edited with Dimitris Stevis and Kathryn Hochstetler, Palgrave, 2014).

Dimitris Stevis – Colorado State University
Dimitris Stevis is professor of International Politics at Colorado State University, USA. His research examines the social governance of the world political economy in the areas of labour and the environment, with sustained attention to the trajectory and social content of green transitions. He most recently co-edited (with Michele Betsill and Kathryn Hochstetler) Advances in International Environmental Politics, 2nd edition (Palgrave Macmillan, 2014) and co-authored (with Michael Fichter) an extensive report entitled Global Framework Agreements in a Union-Hostile Environment: The Case of the USA (Friedrich Ebert Stiftung 2013).