When state elections have more racially diverse candidates, policies to tackle inequality are less likely to be seen as important.

When state elections have more racially diverse candidates, policies to tackle inequality are less likely to be seen as important.

Traditional political theory suggests that as income inequalities increase, voters will tend to demand more policies which are aimed at tackling inequality. And yet, despite the rise of the 1%, we have not seen a comprehensive response from politicians with such policies. In new research, Konstantinos Matakos and Dimitrios Xefteris argue that race and identity may be a mitigating factor. They find that when elections have more diverse candidates, race and identity overtake inequality as issues of importance, and that this is linked to the election of fewer candidates with redistributive platforms.

Since the age of Aristotle, political theory has declared that in a democracy the will of the relatively poorer citizens is dominant because they are in majority. But then, how does this reconcile with recent trends of growing income inequality among almost all advanced industrialised democracies? Why do politicians who are competing for votes not respond to this increase in inequality –in simple terms, this means that the median voter’s income becomes smaller relative to the mean income– by offering more redistribution? Surely, when the median voter (a person’s whose views place them in the middle of the political spectrum) becomes relatively poorer, demand for redistributive policies should increase. In addressing this paradox, many scholars rushed to declare the irrelevance of the economic theory of democracy. They offered a variety of reasons –from lower political engagement and participation of relatively poor citizens to the increased influence of special interests over the political process– to explain why redistribution is not increasing when the median voter becomes relatively poorer. They concluded that the politics of class are over.

Our work begs to differ. Using data from US state-wide elections for local (state) legislative offices (State House and State Senate), we present clear evidence that elected politicians do respond to changes in inequality by proposing higher taxation and more redistribution when inequality (measured by the ratio of mean to median income) increases. But, this response is conditioned on one key factor: the importance of economic issues relative to issues related to racial and ethnic identity during the electoral campaign. We show that, when identity-related issues are more salient and dominate the electoral campaign, then redistribution promises do not strongly depend on voters’ economic preferences –special interest groups and constituencies should be able to influence more easily candidates’ redistribution platforms. On the contrary, when the main issue of an electoral campaign is redistribution, candidates find it very difficult to make proposals that are unappealing to the median voter thus implying a stronger link between inequality and redistribution.

To measure the relative importance of issues related to race and ethnicity, we compile a novel dataset that records the race of all candidates competing in US local elections from 1979 to 2014 and construct an index of the explicit importance of race and ethnicity in the elections: the percentage of those State-wide electoral contests that were contested amongst candidates of different ethnic or racial background –what we call racially differentiated candidates. Starting from a point of greater equality, where the mean and the median income are the same; we find that when, on a given election year, less than a quarter of all state-wide electoral contests were fought between differentiated candidates, a one-standard-deviation increase in income inequality (median income now equals 90 percent of mean income) leads to almost a doubling of the effective State tax rate (from 5 percent to almost 9 percent). This is shown in Figure 1 below. That is, inequality is still a relevant –if not the most important– determinant of redistributive outcomes. 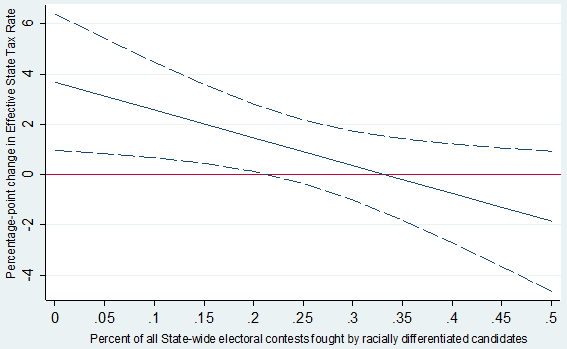 Source: US Census Bureau, US Bureau of Economic Analysis and Tax Foundation. Data from US State-wide elections for local State legislatures

But, at the same time, we also uncover a strong conflict between the politics of racial identity and class. When more than a quarter of all State-wide electoral contests are fought between candidates of different ethnic and racial backgrounds, then inequality plays little role in determining redistributive outcomes. That is, as the importance of race rises, matters related to identity dominate the political competition thus offsetting the effect of inequality on redistributive outcomes. Our results call for a revision of current policies to tackle income inequality by taking into account the spill-over effects from identity to economic issues, especially in racially or ethnically diverse environments.

This post is based on the article “Divide and Rule: Redistribution in a Model with Differentiated Candidates” in Economic Theory and a companion working paper, “Class vs. Identity: The Effect of Candidates’ Race on the Inequality-Redistribution Nexus”.

Konstantinos Matakos – King’s College London
Konstantinos Matakos is an Assistant Professor of Economics at the Department of Political Economy in King’s College London. His primary research fields are Political Economy, Positive Political Science, Public Economics and Applied Microeconomics. He is particularly interested in the political economy of redistribution and inequality, the politics of identity and race, the design of electoral institutions and their effects on polarization, electoral competition and participation, machine politics and corruption, electoral behaviour and formal models of elections.