Every year, federal agencies award around $1 trillion in grants and contracts. How do these awards influence public support for government agencies? In new research that examines how citizens evaluate the performance of seven federal agencies, Susan M. Miller finds that when an agency spends more money in a state, citizens’ evaluations of that agency improve. When citizens and an agency are ideologically aligned, the probability that citizens approve of an agency’s performance can increase by as much as 29 percentage points.

Federal government agencies award thousands of grants and contract a year, funding projects in communities across the US. In fiscal year (FY) 2014, for example, the Centers for Disease Control and Prevention (CDC) awarded over $800 million to 62 grantees through their Hospital Preparedness Program and Public Health Emergency Preparedness Cooperative Agreements.  In total, federal agencies award approximately $1 trillion in grants and contracts per year.  And there is considerable variation in how grant and contract funds are distributed among the states, ranging from over $7,000 per capita (Virginia) to less than $1,300 (Kansas) in FY 2013; this variation is illustrated in Figure 1.  Research indicates that, among other factors, government expenditures can influence electoral support for incumbent politicians.  Can these expenditures help to shape public support for the agencies that award them as well?

I consider this question in new research that focuses on the link between federal agency allocation of grants and contracts to citizens’ states and their evaluation of agency performance.  The grant and contract funds that agencies award to a state might serve as an information shortcut for citizens when they assess the performance of an agency.  Agency funding of grants and contracts is often visible to citizens in a way that other day-to-day agency activities are not.  Members of Congress, the media, and the agencies themselves advertise agency grant and contract awards.  Citizens might also work for organizations that benefit, directly or indirectly, from agency grants or contracts.  The grants and contracts that an agency awards to a local community might shape citizens’ impressions of federal agency activities, perhaps signaling to citizens that the agency is serving its purpose and functioning well.  And, by supporting local projects, an agency might ingratiate itself with citizens, making them more likely to view the agency’s performance in a positive light.  If so, this leads to the expectation that agency grant and contract expenditures in citizens’ states will be positively related to their views of agency performance.

The positive effect of agency grant and contract spending, however, might be greater for citizens who share an ideological position with the agency than for those who do not.  Citizen-agency ideological alignment may indicate that these citizens support the types of programs and projects that are funded by the agency.  If a citizen does not support what an agency is trying to accomplish, this could create tension between an appreciation of the economic benefits associated with agency grant and contract awards and a core objection to the larger goals toward which the funding is aimed.  This tension could temper the positive effect of agency spending on citizens’ assessments of agency performance.  Liberal citizens, for example, might rate the Environmental Protection Agency (EPA) higher than their conservative counterparts, even if their states receive the same amount of EPA funding.

To test this argument, I use data from a 2013 Gallup News Service Poll, which asks respondents to evaluate the performance of seven federal agencies: the Centers for Disease Control and Prevention (CDC), the Department of Homeland Security (DHS), the Environmental Protection Agency (EPA), the Federal Bureau of Investigation (FBI), the Food and Drug Administration (FDA), the Internal Revenue Service (IRS), and the National Aeronautics and Space Administration (NASA).  Using respondents’ reported ideology and a measure of agency ideal point estimates developed by Clinton, Bertelli, Grose, Lewis, and Nixon to determine agency ideological positions, I assign liberal respondents as ideologically aligned with the EPA, FDA, and CDC, and conservative respondents as ideologically aligned with the DHS.  The other three agencies – FBI, IRS, and NASA – are coded as neither liberal nor conservative, meaning that they are not matched with liberal or conservative respondents. 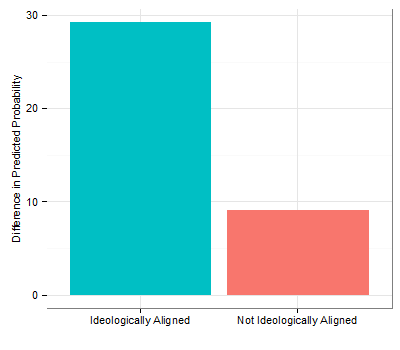 These findings indicate that agency grant and contract spending is positively linked to citizens’ evaluations of agency performance; and that agency spending in a citizen’s state is more meaningful for a citizen’s evaluation of the agency if the citizen and the agency are ideologically aligned.  Like elected officials, federal agencies appear to benefit from the allocation of federal funds.  In this era of relatively low levels of confidence in government institutions, these results provide some evidence that money can, at least to a certain extent, buy public support for agencies, perhaps even from citizens who may not otherwise be predisposed toward viewing an agency favorably.

This article is based on the paper, ‘Public Support for Sale: Government Spending and Public Approval of Federal Agency Performance’ in American Politics Research.