Editor’s Note: Due to a calculation error by one of the authors (Atsushi Tago), this article was originally titled “Obama’s visit to Hiroshima is viewed as “a sort of” apology by the people of Japan”. The text and introduction have been altered to reflect the corrected calculation, but the original text remains in strikethrough. The authors regret their error.

This week President Obama is set to visit the Japanese city of Hiroshima, a city which was destroyed by the US with the first atomic bomb used in anger in August 1945. Though those attacked by the Hiroshima and Nagasaki bombs in the summer of 1945 were victims of the Second World War, the bombs changed the world forever, ushering in a new age under the shadow of nuclear weapons.

What the Japanese people should not forget is the fact that the US’ nuclear attacks were ultimately brought on by themselves. Japan’s conduct in Asia and its bad policy choices after the Manchurian Incident in 1931 helped to lead to the devastating attacks in the summer of 1945. As US President Harry Truman made it clear in his radio address three days after the attack, the US had

Furthermore, Truman made it clear that it was done in order to shorten the war and “to save the lives of thousands and thousands of young Americans”, calling Hiroshima “a military base.” Indeed, a survey in 2015 by the Pew Research Center found that the majority (56 per cent) of Americans believe that the use of nuclear weapons was justified (by contrast, in Japan, only 14 per cent say it was justified, versus 79 per cent saying that it was not).

However, whether we accept such justifications for bombing the city or not, 140,000 people, mainly civilians, were killed by the weapon. The atomic bomb could have been dropped on the outskirts of the major cities (e.g. in the Bay of Tokyo or a large forest) instead; the Emperor and his cabinet ministers might then have surrendered after recognizing the devastating power of the weapon. The Japanese government and the former Imperial Army and Navy could never (and should never) claim to be victims of the war, but surely, the people of Hiroshima and Nagasaki could emphasize the devastating damage of the bomb that changed the world. In this light, they may have a right to ask the US to admit it was not the right decision (especially the choice to attack the city’s center with its large civilian population) and apologize for that.

“President Obama’s Hiroshima visit without an apology” is thus a controversial issue to the US and Japanese public. While the White House categorically denies that President Obama intends to apologize, and has tried to frame the visit as something different from an apology, the media and general public do see the visit as linked to the idea of an apology. How should the US government face its undeniable and undesirable past?

To study this, we performed a series of surveys on a nation-wide Japanese sample of about 1,000 people, and on a similar number of people currently living in Hiroshima. We asked if they support the visit itself, if they see sincerity in the visit, and if they see the visit as a sort of apology (even though the White House denies it).

On the question asking whether they consider the visit to be “a sort of apology,” the answer is “No”. The visit is not considered as a sort of “apology” in both Hiroshima and in the national samples, echoing the White House’s statements that President Obama would not revisit the decision to use the atomic bomb and there was no intention to make an apology. For the national sample only 22.7 per cent, see Obama’s visit as a sort of apology, and for Hiroshima, the number is much smaller, at 14.4 per cent.

Figure 1 – Mean Score for Question “Do you agree or disagree to think that the visit is a sort of apology to Japanese?” 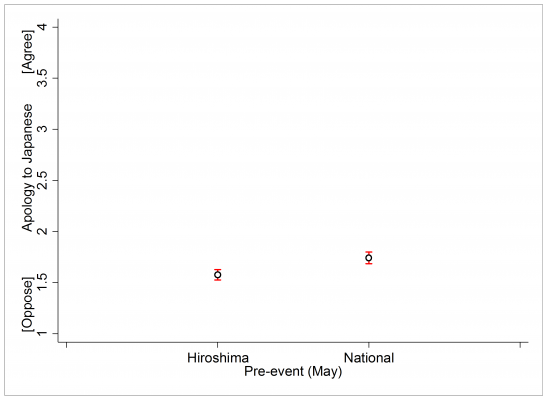 Note: Respondents are asked to select from 1 [disagree] to 4 [agree] with an option to choose [Do not know]. There are 93 and 78 people who selected [Do not know] answer in the national and Hiroshima samples, respectively. Red bar shows 95% C.I.

The overwhelming majority in Japan and especially in Hiroshima think that President Obama’s visit is not an apology. His decision for coming to Hiroshima is widely supported by Japanese, and it will be regarded as a proof of the matured, deep-rooted friendship of the two countries, which has overcome the tragic and controversial memory of the war. We believe that American public diplomacy has been successful for this particular visit in terms of the fact the apology has been denied (since the President cannot do so due to his domestic audience) but at the same time increasing the positive image and the level of support for his action among the Japanese

Finally, Figure 2 shows that the Japanese are not asking the US to apologize for the use of the nuclear weapons. While the national sample is a bit higher than the neutral 2.5 score, neither the people in Hiroshima nor the Japanese public in general are eager for the US to give them a formal statement of apology. We believe this is clear evidence that the two nations truly enjoy forward-looking bilateral relations, rather than wanting to hold on to the past. And importantly, such a tendency is stronger in Hiroshima than the national average.

Figure 2 – Mean Score for Question “Do you agree or disagree to think that the USA should make an apology for the fact that it dropped the nuclear bombs to Japan?” 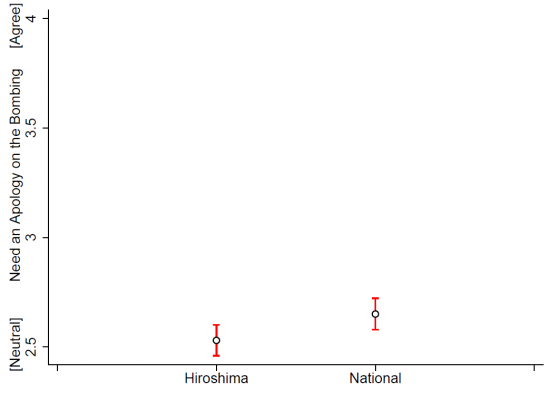 Note: Respondents are asked to select from 1 [disagree] to 4 [agree] with an option to choose [Do not know]. There are 225 and 215 people who selected [Do not know] answer in the national and Hiroshima samples, respectively. Red bar shows 95% C.I.

This survey was conducted by Collaborative Research On Political Information Transmission (CROP-IT) with funding support from the Japan Society for the Promotion of Science (JSPS) from May 20 to 24, 2016. Shoko Kohama (Hokkaido University) is also a member of this survey study. Any opinions, findings, and conclusions or recommendations expressed in this material are those of the authors and do not necessarily reflect the views of the JSPS.

Atsushi Tago – Kobe University
Atsushi Tago is a professor of International Relations at the Graduate School of Law, Kobe University (April 2015-). His main research interests are American use of force, scientific analysis of military coalitions, multilateralism, and public diplomacy. His research has appeared in journals including Armed Forces and Society, British Journal of Political Science, Conflict Management and Peace Science, International Relations of Asia-Pacific, and the Journal of Peace Research. He is the principle investigator (PI) of the Collaborative Research On Political Information Transmission (CROP-IT) project, funded by the Japan Society for the Promotion of Science (JSPS).