Affirmative action policies in the US are designed to eliminate unlawful discrimination of applicants to educational programs or professional employment, to remedy the results of such prior discrimination, and to prevent future discrimination. These policies consist of a broad collection of executive orders, bureaucratic decisions, court cases, and state legislation. The program was expanded under President Bill Clinton’s executive directive— “Mend It, Don’t End It”— which remains the most explicit statement to date.  Subsequent targeted legislation expanded protections beyond race/ethnicity to include women, people of a certain age, people with disabilities, and veterans. Yet, the actual policy intent of affirmative action remains confusing to college students; particularly, when debates are presented within a race-only paradigm—common in most college textbooks—without the inclusion of other protected categories.

When investigating American government introductory textbooks to examine the extent to which affirmative action discussions challenge or reinforce prevailing myths and meritocracy, we found that textbooks that  focus on policy intent—those which present an  “equality of opportunity” view—challenge historical discrimination for targeted groups; while the policy interpretation focus—presents an  “equality of outcome” view— which seemingly reinforces negative attitudes toward racial groups and promotes meritocracy.  Affirmative action discussions in classrooms are often tempered by negative views in the public discourse generating resistance and rage among students, who lack full understanding of the actual policy intent. This results in resentment toward racial groups without fully interrogating the tendency for all social groups to support broader based benefit programs, especially those that may benefit themselves. 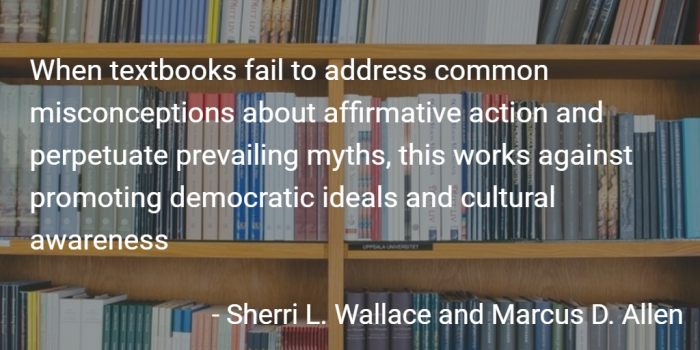 Recent studies on diversity in American government textbooks recommend broadening coverage to include race beyond “Civil Rights”, to address stereotypical depictions of racial groups, and to mainstream intersectionality of race, ethnicity, gender, and class. Affirmative action is usually presented as “equal opportunity” versus “equal outcome,” and usually follows the historical narrative on African American political development, arguing its purpose is to eliminate racial discrimination, yet, avoid “reverse discrimination” toward whites.

Figure 1 shows the results of our content analysis on the “mention of code words or phrases”. It reveals that the majority of the American government textbooks introduced affirmative action as a “controversy” rather than legal redress.  An overwhelming majority of the textbooks present it as a quota program referencing “numerical quotas,” “numerical goals,” “timetables” or “set-asides” never challenging this myth that is both inaccurate and unconstitutional.  Terms like “reverse discrimination” or “reverse racism” are used more frequently. Since the reverse racism argument rests on the notion that it is a form of racial discrimination, students may frame their opinions racially, reinforcing rather than debunking this myth.   When affirmative action is presented positively, it is hidden in coded language that is often racially-dichotomized, gender-exclusive, and where the “public” is credited as praising the abandonment of the policy. Words such as “preferential” and “compensatory treatment” are mentioned in a large number of textbooks, implying that affirmative action gives racial groups “unfair advantages over whites” in a “color-blind society” that should be based on individual “merit,” undefined.

Figure 1 – Mentions of affirmative action policy in US college textbooks 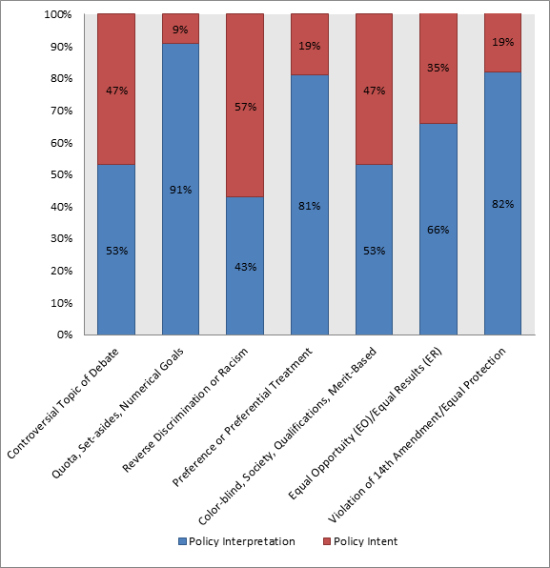 Consequently, when presented as “equal opportunity” versus “equal outcomes,” and situated in discussions of how best to eliminate or remedy historical discrimination, “equal opportunity” was most associated with liberalism; while the goal of “equal outcome” was most associated with conservativism. The conservative interpretation presents affirmative action policy as a race-based program that promotes reverse discrimination and negates meritocracy, often using coded language like “deserving candidates” to imply that it is unfair to whites, and strongly suggesting that the policy is “morally” wrong.  The liberal interpretation often linked the policy intent of achieving economic rights with civil rights to similar policies in other nations, such as India’s constitutionally-based affirmative action policy or Australia’s and Canada’s affirmative action measures that favor “positive discrimination” while avoiding “reverse discrimination” in promoting “equal opportunity.” Interestingly, this was found in only two textbooks. Such inclusion is instructive in dispelling affirmative action myths and individualistic, meritocratic views.  More importantly, it acknowledges the need for legal action to address the historical, lingering effects of race and sex discrimination in access to education and employment in the United States.

The most confusing discussions were Supreme Court decisions used to examine whether affirmative action programs were constitutionally permissible.  The majority of textbooks presented the issue by asking whether affirmative action violates the 14th Amendment’s equal protection clause.  Mixed messages were abundant when authors attempted to explain “judiciary collective ambivalence” in decisions meant to achieve racial diversity in higher education.  Recent upheld Michigan and Texas university cases are often included; however, all but two of the textbooks began by citing the nearly 40-year-old Board of Regents of the University of California v. Bakke (1978) decision to discuss “reverse racism” or the permissibility of “quotas” in educational admissions, again subtly implying that affirmative action was, until recently, a quota program.  The most common narrative recognized the desirability of a diverse student body that includes students of all social backgrounds, but the central discussions were structured to argue that racial quotas violated the law; provided unfair advantages to (racial) minorities and unduly downgraded merit as the basis of social economic opportunities; hence, reinforcing, instead of challenging, prevailing myths. Consequently, most textbooks argued for eliminating race-based affirmative action, stressing the need for a meritocratic approach, without ever addressing how institutional discrimination make such legal redress policies crucial for achieving equity and an inclusive society.

Because American government textbooks are used to transmit knowledge about our political system, influence political socialization, and promote political participation, it is important to present the actual intent of affirmative action policy, rather than relay implicit messages through interpretation.  When textbooks fail to address common misconceptions about the policy itself and, perpetuate prevailing myths, this works against promoting democratic ideals and cultural awareness.

Providing the explicit definition of affirmative action, grounded in modern racism theory, as outlined by the Clinton directive and Supreme Court decisions that eliminate quotas, would eliminate confusion and biased opinions among students and would allow them to engage their critical thinking skills and to learn more effectively. It would also recognize that legal efforts are still necessary for leveling the playing field for all Americans.

This article is based on the paper, “Affirmative Action Debates in American Government Textbooks” in the Journal of Black Studies.

Sherri L. Wallace – University of Louisville
Sherri L. Wallace is Professor in the Department of Political Science at the University of Louisville in Louisville, Kentucky.  She is co-author with Hanes Walton, Jr. and Robert C. Smith on the forthcoming 2017, American Politics and the African American Quest for Universal Freedom (New York, NY: Routledge).  Her research interests include college textbook diversity, race and politics, and community economic development.