More than six decades after the historic Brown vs Board of Education Supreme Court decision, which desegregated the nation’s schools, a significant achievement gap between Black and White students still remains. Theodore J. Davis, Jr argues that the slow progress in closing this gap comes down to the politics of race, involving past and present discriminatory institutional policies and practices, and the politics of education, which has contributed to the rise of alternative schooling, the re-segregating of public schools, and conflict over the allocation public education resources.

In 2014, the United States celebrated the 60th anniversary of the Brown versus the Topeka Board of Education decision. The Brown decision was a landmark Supreme Court case that declared separation of the races to be in violation of the equal protection clause of the US Constitution. The decision established that state-sponsored racial segregation in public schools was detrimental to Black students development because the “separate educational facilities were inherently unequal and produced unequal results.”

Sixty years after the Brown decision, the US is still dealing with significant racial disparities in educational outcomes (as measured by academic achievement and attainment).  Today the percentage of Black students prepared for and graduating from post-secondary schools remain significantly less than the percentage of White students.  Former U. S. Secretary of Education Rod Paige has described the educational achievement and attainment gaps as America’s civil rights crisis of the twenty-first century.

Since 1970, there are those who pointed out that a significant decline has occurred between Black and White students’ mathematics scores.   As shown in Figure 1, the difference in math scores was as high as 40 percentage points in 1973, declining to a low of 21 percentage points in 1990.  However, by the end of the 1990s, the gap in math scores grew to as high as 31 percent. Though the gap in math scores leveled off to around 27 percent during the 2000s, its closure has generally stalled since. 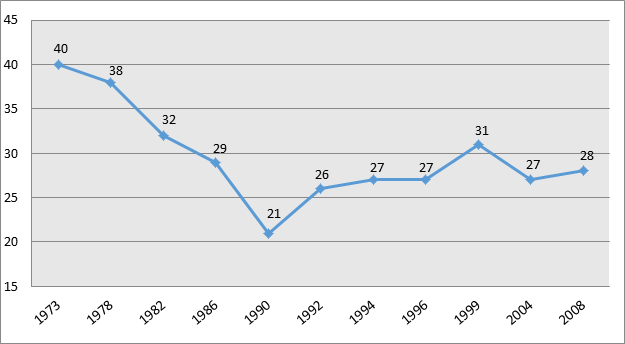 The State of Delaware has long played a pivotal role in the nation’s struggle to end school segregation and promote educational equality; it was one of the original litigants in the Brown v. Board of Education cases. Today Delaware continues to struggle with closing its educational achievement gap. Delaware isn’t an outlier when it comes to the continuation of racial disparities in educational outcomes; rather Delaware is typical of the rest.

An examination of the percentage gap between Black and White students meeting Delaware’s mathematic standards since 1998 puts developments into perspective. As the trend line in Figure 2 indicates, the gap in the percentage of Black and White students meeting the state’s math standards over the past 18 years has been virtually flat.  In Delaware, between 1998 and 2004, the gap grew by as much as ten percentage points. The gap in the percent of Black and White students’ meeting the state’s math standard averaged 32.4 between 2004 and 2013 (In 2011, a new instrument was introduced that may explain the disruption in the pattern that year). The good news is that since 2010, there have been some indications of closure in the gap even if it remains significantly large at 25 percentage points. 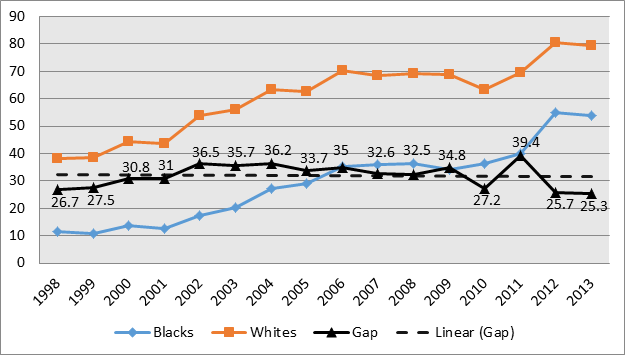 How do we explain this slow progress in the closure of the Black-White achievement gap nationally and in Delaware? Clearly, no one factor explains the continuation of the achievement gap. Numerous factors including individual behavior, culture, discrimination (ethnic and racial), institutional policies and practices, community/family environment(s), among other factors all contribute to the gap. However, the focus here is on politics as a contributing factor. More specifically, the focus is on the politics of race, the politics of education, and the interaction of these two.

The politics of race involves those activities engaged in by racial groups to influence the distribution of society’s resources and the determination of its collective values.   From the time of the Brown decision to the late 1980s, the politics of race was driven by the pursuit of racial equality (i.e., equal opportunity and equal access) through desegregation in education, employment, housing, and public accommodations.  However, desegregation did not occur without resistance.

In the second Brown decision of 1955, the Supreme Court urged that school desegregation should be implemented “with all deliberate speed.”  Despite this declaration, most states were very slow in implementing the policy.  By the early 1970s, forced busing became the necessary means to desegregate schools because of housing segregation. In Delaware many Whites rejected the notion of forced busing, and this accelerated “White flight” to the suburbs and in some cases from public schools.

Despite White flight, initially, there were significant improvements in the closure of the achievement gap through the 1980s as shown in Figure 1.  However, by the early 1990s, the effect of White flight from public schools coupled with geographic population shifts to the suburbs once again lead to the start of a re-segregation of public schools.  This time, segregation was been based the interaction of race and socioeconomic status.

The politics of education has traditionally been about resolving conflicting visions and decision-making about what schools should and should not be doing in regards to preparing students for present and future opportunities in the labor market.  Since the 1990s the politics of education has also become about the apportionment and distribution of limited resources.  The pursuit of education has become very competitive because the need for educational credentials has become very crucial in today’s labor market. Education is one of the primary means by which Americans have used to elevate their standard of living and quality of life.  The quality of one’s grade school education often determines the quality of one’s higher education and future employment opportunities.  Many school districts with large racial minority populations are resource poor, while many suburban districts are resource-advantaged. This struggle of the allocation of education resources has also accelerated and changed the nature of the politics of education since the 1990s.

The politics of race and politics of education have evolved over the years to the extent that they now intersect. Public education reform in Delaware, like many places across the US, has been consistently mired by this interaction, which has given rise to alternative schooling (i.e., school choice, charter schools, home-schooling, and private and religious schools), the re-segregation of public schools and greater inequality in educational access and the available resources.  All of this has partly contributed to slowing the closure of the achievement gap. And this interaction between the politics of race and the politics of education often has the most negative effect on the children of racial and ethnic minorities and White families of lower socioeconomic status.

Theodore J. Davis – University of Delaware
​Dr. Theodore J. Davis, Jr. is a Professor in the Department of Political Science and International Relations at the University of Delaware. His research and teaching interests include urban politics, politics of inequality and Africana Studies. His current research focus includes urban politics and community development (with a focus on inner city communities); educational achievement gap; the politics of race and socioeconomic inequality; and governance and poverty reduction in sub-Saharan Africa.