Increasing inequality has been linked to rising violent crime rates, but what about property crime? In new research which examines property crime by Census block groups in three US cities, Neil Metz and Mariya Burdina find that the wider the median income gap from the poorest neighboring block group, the greater the level of property crime in the richer block groups. They write that policies aimed at reducing localized income inequality may help to reduce the incentive for property crime.

Income inequality is a topic of increasing interest as the share of total income held by the top 1 percent continues to grow in the US and the percentage of the population below the poverty line continues to rise. A substantial amount of research indicates income inequality leads to violent crime; as income gaps create social tension, this leads to a feeling of unfairness for the poor and they lash out with violence. However, there is less of a consensus when it comes to property crime.

Theory suggests income inequality should lead to property crime as income differences create an incentive for those relatively poor to steal from richer households. Previous research with inconclusive results uses large geographical scales (country, state, county, city) to investigate the relationship between inequality and property crime. Larger geographic scales may mask the true relationship as routine activity theory indicates that offenders often commit crimes in familiar locations near home or work and travel distances of less than 1 or 2 miles.

Our new research uses Census block group income and property crime data from three US cities: Nashville, Portland, and Tucson to investigate their relationship. Block groups are typically less than one square mile in size and the smallest geographic level at which household income data is available. The scale of the data is important as it allows for an investigation of crime and inequality across block groups instead of merely within a geographic area. Property crime rates differ substantially at the block group level, and the spatial analysis of income data provides insight into these differences. 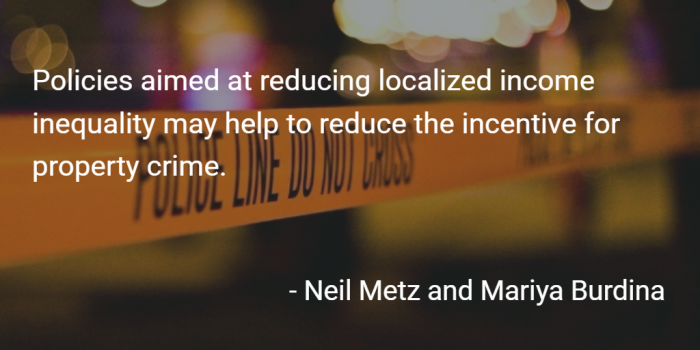 A low Gini coefficient (closer to 0) indicates similar incomes within a block group, while a high Gini coefficient (closer to 1) indicates unequal incomes. One might expect higher levels of inequality within a block group to lead to increased property crime, but this is not the case. While there are possible data limitations from Census data collection that lead to this result. It is most likely due to the fact that block groups do not have wide ranging household income values and a few outliers in poor block groups create a large Gini coefficient. For example, in one block group, 70 percent of households earn less than US$20,000 and no household earns more than US$75,000, but the Gini coefficient is very high (0.51), this is due to 13 percent of household earning between US$50,000 and US$75,000. The high income outliers in poor block groups have a relatively large portion of the block group income, but are still not a high absolute level of income. Figure 2 shows the high correlation between the percentage of household in poverty and the Gini coefficient, indicating that a high Gini merely reflects poor areas and thus may not be an appropriate measure of true inequality for small geographic areas. 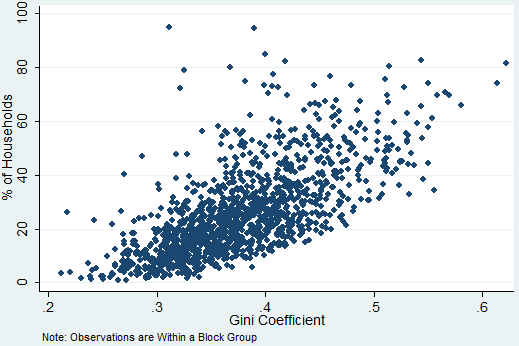 Overall, our results support the theory that as income inequality increases, so does property crime, and that the spatial context plays important role in the relationship. Policies aimed at reducing localized income inequality may help to reduce the incentive for property crime. If households have similar income, then there should be no reason for people to steal from their neighbors. However, we must caution readers on the robustness of these results to other cities. Block groups can vary dramatically in size across large and small cities which may impact the results.

This article is based on the paper, ‘Neighbourhood income inequality and property crime‘ in Urban Studies.