In the 1960s and 70s, Congress enacted a number of laws aimed at eliminating discrimination in access to credit in the housing market. Despite these legal prohibitions against discrimination, Hal Martin, Andrew Hanson, and Zackary Hawley find that mortgage lenders do discriminate against African Americans. Using fictitious ‘black’ and ‘white’ names to request mortgage information, they find that lenders sent responses more slowly and less often to those with ”black’ names, and that this difference was even more pronounced for those with lower credit scores.

Facing a history of racial discrimination, American public policy has taken aim at providing fair and equal access to credit and housing markets regardless of a buyer or borrower’s race.  The Fair Housing Act forbids landlords and sellers from discriminating against renters and buyers on the basis of a range of protected classes, including race.  The Equal Credit Opportunity Act extends similar protections to borrowers seeking credit. The legal prohibitions against discrimination in lending are clear: lenders are not allowed to use the race of the borrower as a determining factor when making lending decisions.  Regulators look for discrimination under the aegis of these laws. In new research, we find that race does still matter to lenders – they are less likely to respond to, and respond more slowly to black lenders.

Detecting racial discrimination is not easy.  Lenders make credit decisions based on a borrower’s wealth, income and past repayment history, and all of these are somewhat correlated with race.  Lenders who make decisions solely on these factors may price loans differently by race, or deny loans at different rates across racial groups, simply because of these correlations.  Some studies have shown that the racial gap in lending is smaller once these factors are accounted for.

Some forms of discrimination would be difficult to detect even if one observes everything used by the lender to make a lending decision.  This is because the process of borrowing does not begin with a completed application, but with borrowers making inquiries about loans.

Our research examines discrimination at this stage of the lending process.  We are interested in seeing whether American lenders treat blacks and whites differently at the moment they start the conversation about obtaining a loan.  To do this, we use the paired audit technique developed in the labor and housing discrimination literature.  In our paired audit, two borrowers who are similar in all ways except one (i.e. race) make inquiries with a lender about a home mortgage.  If the lenders are more forthcoming to borrowers of one type than another, this is evidence that the lenders are being discriminatory.  Because all other factors are controlled for, we know that unobserved differences between borrowers do not explain a difference in treatment.

We use fictitious names that are highly likely (based on birth records) to belong to either black or white people to signal the race of the borrower to the lenders.  We create email addresses containing each name, and send emails to lenders inquiring about the loan process.  The content of each email is randomly assigned from a set of similar phrases to inquire about obtaining a loan; randomization ensures that the content is not correlated with the race of the borrower.  In this way, we control everything the lender observes about their prospective clients, who are similar in every way except that some have “black” names and some have “white” names.

Table 1 – Frequency of names in experiment

In addition to varying race, we test to see whether credit scores impact lender response.  Approximately two thirds of our borrower emails report a credit score, drawn from one of two ranges: 600-649 (the 15-30th percentile of the national distribution) and 700-749 (the 40-60th percentile of the national distribution).  This allows us to compare the impact of a credit score as well as a borrower’s race on the lender’s response.

Interestingly, the race effect on lender response is nearly non-existent when both blacks and whites report a high (700-749) credit score, and is most pronounced when both report a low credit score.  We also found that the relative effect of higher credit scores is not the same for blacks and whites.  The difference between the response rate to blacks with high scores vs. whites with low scores is 7.1 percentage points (favoring blacks); however, whites with high credit scores have a 10.2 percentage point higher response rate than blacks with low scores.  This means that having a lower credit score hurts blacks more than whites at this stage of the lending process.  In our experiment, the difference in response rate to blacks is equivalent to having a credit score that is 71 points lower.

In addition to our initial findings that examine whether or not lenders reply to borrowers in our experiment, we also examine how they reply.  We find that lenders are more likely to send follow-up communication to white borrowers (6.9 percent of the time vs 5.2 percent), and that their initial communication is sent quicker.  We also find some evidence that lenders are more likely to include details about a loan when responding to whites than they are when responding to black clients.

While credit score affects the response rate more than does the borrower’s race in our experiment, the implication of the race differential is still troubling from the perspective of policymakers who intend for no racial discrimination to occur.  Our finding of differential treatment by lenders suggests that observed differences in borrowing outcomes like loan denial and lending terms may not merely be a function of differential access to lenders or of borrower credit characteristics.  Our results show that discrimination can begin early in the lending process.

This article is based on the paper, ‘Discrimination in mortgage lending: Evidence from a correspondence experiment’, in the Journal of Urban Economics. 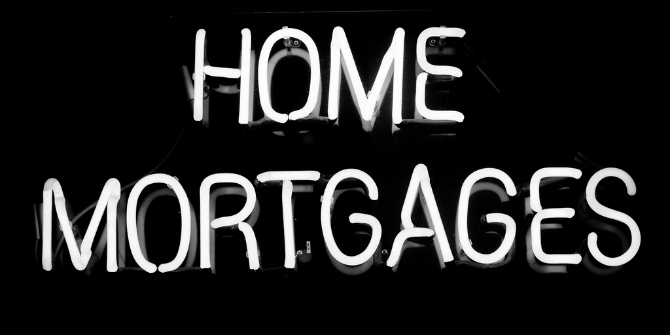