If it was not for Donald Trump’s presence in the 2016 race, Hillary Clinton would be the least favored presidential candidate there has ever been. At the same time, however, she is rated by fact checkers as being far more honest than Trump or any other primary candidate. Using a survey of Californians, Kim L. Nalder, Meredith Conroy, and Danielle Joesten Martin explore how voters feel about Clinton. They find that Trump’s framing of Clinton as “crooked” has stuck, with most of his supporters describing her as a “liar” and “untrustworthy”. Clinton’s own supporters on the other hand, were more likely to describe her as “experienced”, “smart” and “strong”. On gender lines, women tend to describe Clinton more positively compared to men, and also note her gender.

Hillary Clinton’s campaign has its work cut out for it.  In spite of her status as the most honest candidate in the 2016 race according to Pulitzer-prize winning Politifact’s assessments versus Trump’s record “pants-on-fire” dishonesty score,  she is second only to Trump in all-time presidential candidate unfavorability ratings.

We set out to better understand this phenomenon by asking Californians to describe Hillary Clinton using three words or phrases. Our CalSpeaks Poll administered online to a representative sample of Californians during the week prior to the California primary (May 23-31) shows a remarkable disjunct. It’s as if respondents were reacting to two completely separate and unrelated individuals. First, we compared impressions of Clinton among Trump supporters vs. Clinton supporters: 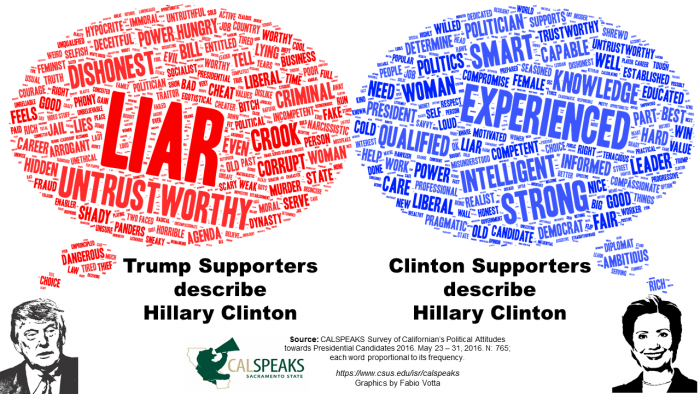 The terms used by Trump supporters reflect the “Crooked Hillary” framing of the Trump campaign, and make Chris Christie’s “lock her up” speech at the Republican National Convention seem perfectly calibrated to appeal to Trump’s champions. Trump voters’ impressions of Clinton may also speak to the influence of campaign messaging. Trump unveiled the “Crooked Hillary” nickname about three months ago at a rally in Watertown, New York. Since then, he consistently refers to Clinton by the nickname, and has made it clear that it is his intention for the sobriquet to stick. According to our survey data, it seems to have caught on. The prominence of “liar” (and similar terms such as “untrustworthy”, “dishonest”, “crook”, “criminal”, and “corrupt”) among Trump voters compared to Clinton voters also aligns with theories of motivated reasoning. Trump supporters listened to and recalled their candidate’s messaging, discounting conflicting information or evidence (such as Politifact rating Clinton as the most honest candidate, or null findings in the many Benghazi hearings, etc.).

Beyond mere negative characterizations of Clinton by Trump supporters, we find indications that they see her as a person utterly worthy of contempt. Our analysis found a relatively high frequency of demonizing terms such as “murder”, “jail”, “crook”, “criminal”, and “traitor” that one would expect to be associated with enemies of the state, not simply political opponents. Terms such as “bitch” and “shrill” which are highly negative and gendered also show up in the sample. Appealing to this sentiment, campaign paraphernalia vendors (not directly affiliated with the Trump campaign or Republican Party) have sold items that display phrases such as “Trump that Bitch,” and “Life’s a Bitch, Don’t Vote for One.”

Clinton supporters see a remarkably different version of their candidate. Their image of her comports well with the Politifact findings.  They see a well-qualified, competent public servant who embodies the characteristics expected of a statesperson. The top term for her by far is “experienced”, followed by “strong”, “smart”, “intelligent”, “qualified” and “knowledge”. These are the types of terms we would expect supporters of a candidate to use in any normal election year and seem more diffusely related to her messaging. Expanding the number of people who see her in this light will be the primary challenge of the Democratic Convention and the Clinton campaign.

Much ink has been spilled explaining such differing impressions of the candidates, and one promising line of reasoning has to do with misogyny. Though women can internalize misogyny too, it’s revealing to look at the differing views of Secretary Clinton depending on the gender of the respondent: 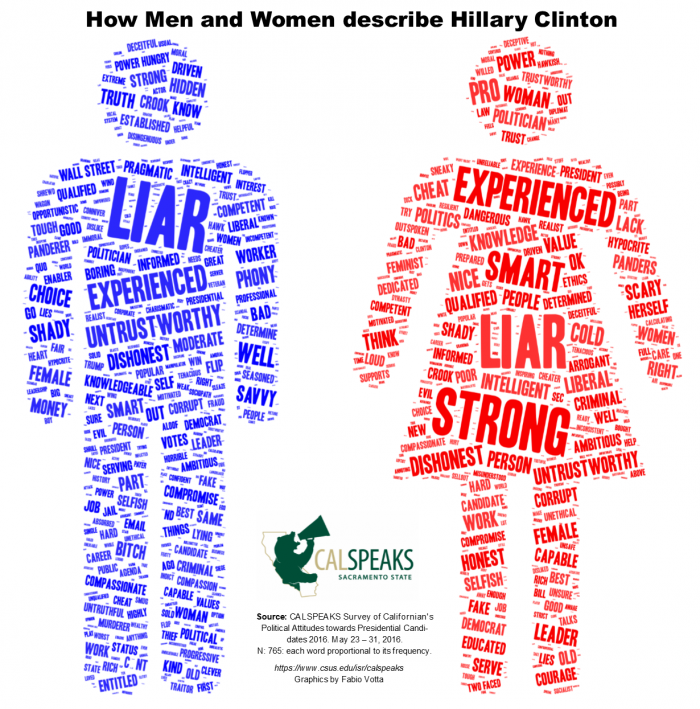 First, framing Clinton as “crooked” resonates across gender lines – “liar” is a prominent descriptor of Clinton among both men and women. Both women and men also frequently mention “experienced,” a gender-neutral term. Four of the five top terms overlap: “liar”, “experienced”, “smart”, and “dishonest”. However, women’s descriptions of Clinton are more diverse and positive. Women are far more likely to describe her as “strong”, “smart”, and “intelligent.”   Women also more frequently note Clinton’s gender (“woman” and “female”), perhaps an indication of how significant it is for women to have the first serious female contender for the presidency or the importance of gender for women voters.

What does the Clinton campaign need to do during the Democratic National Convention and beyond to get more potential voters to see her as the Dr. Jekyll rather than the Mr. (or Ms.) Hyde persona? Certainly, as one of the most well-known figures in American politics for decades, impressions of her may be solidified already.  However, her popularity has wavered significantly in recent years. During her tenure as Secretary of State, big majorities of Americans saw her favorably, with only about a third unfavorable.  However, that has drastically changed for the worse since she began running for president.

This could indicate a few things. First, it’s possible that this favorability change demonstrates that impressions of her are malleable, and thus capable of swinging back toward more favorable over the course of the campaign. Also, it’s possible that people support Clinton when she is not vying for political power. However, as she campaigns for the highest office in the land, she violates our stereotypical notions of what it means to be a woman, and we judge her more critically Indeed, words or phrases such as “power hungry” and “arrogant,” prominent in Trump supporters’ impressions of Clinton, may be reflections of voters’ (potentially implicit) feelings of discomfort with a woman campaigning to be President of the United States.

It will be fascinating to observe the Clinton campaign work to convince voters that she is decent, honest, trustworthy and competent. But for now, it’s clear that who Hillary Clinton is depends on the beholder.