Many illegal drugs are sold in open air markets on the street. But what determines where drug transactions take place? In new research, Jeremy D. Barnum, Walter L. Campbell, Sarah Trocchio, Joel M. Caplan, and Leslie W. Kennedy examine how drug dealers and buyers can take advantage of features of the urban environment in Chicago to find more effective places to make drug deals. Assessing 28 of these environmental features, they find that drug deals were much more likely to take place near to foreclosures, problem landlords and broken street lighting. They write that their findings could be used to inform more place-based policing strategies aimed at tackling drug markets.

Drugs are often sold on the streets in open-air drug markets. Open-air drug dealing is a complex endeavor between buyers and sellers, who are frequently strangers or only loosely acquainted, and yet must find a way to balance a competing set of demands: access and security.

Like sellers and buyers in the legitimate marketplace, drug dealers and consumers in the illicit marketplace must be able to easily access one another to conduct business. However, this is made more difficult in an illicit market where advertising a legally prohibited product would put all parties at risk of formal sanction. Furthermore, and in contrast to legitimate marketplaces, dealers and consumers must always consider security. The degree of security is both a function of risk of arrest by law enforcement for buying or selling an illegal substance and risk of dispute with other dealers or consumers, because illegal markets lack a formal third party (e.g., courts) to resolve disagreements.

One way to respond to the competing demands of operating in the open-air illicit marketplace is to conduct business only at certain locations. Research has found that nearly half of all drug transactions occur on less than 5 percent of street segments. Studies have suggested that some locations are better suited for open-air drug dealing than others because of their particular environmental features, such as hotels, bars, or public transportation stops. These have been termed “ecological advantages” because they can be exploited to enhance both accessibility and security when buying and selling drugs. For example, locations where certain ecological advantages exist are easy to get to, familiar, and draw a large number of persons who could potentially purchase drugs. Moreover, these locations often produce legitimate activity that allows dealers and consumers to blend in to their surroundings.

We assessed the relationship between 28 environmental features that were likely to bolster accessibility or security in open-air drug markets for four drug types: cannabis, heroin, crack, and cocaine. The main results of our four risk terrain models are presented in Table 1. Overall, we identified 11 environmental features related to cannabis dealing, 12 for heroin dealing, 11 for crack dealing, and 3 for cocaine dealing. The riskiest feature for markets of all drug types in Chicago was foreclosures; the relative risk values indicate that the risk of drug dealing near foreclosures alone was higher by a factor of between 5 and 16.5 compared to other features in each model. 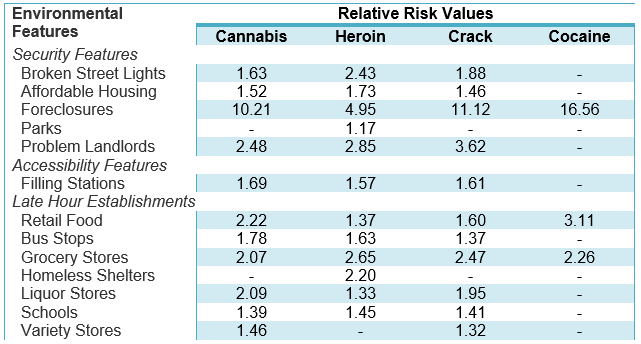 Across all drug market types, our models highlighted several environmental features that are likely to enhance security and accessibility for open-air drug transactions. Security for drug transactions was enhanced in locations with broken street lighting, affordable housing, foreclosures, and problem landlords were at higher risk for cannabis, heroin, and crack dealing. In terms of accessibility, locations with gas stations, retail food establishments, bus stops, grocery stores, liquor stores, and schools were at higher risk for cannabis, heroin, and crack dealing. While our models do not allow us to establish whether environmental features associated with accessibility are more or less important than those associated with security, they do make it clear that, consistent with theory and prior research, both components of ecological advantage are important at locations of drug sales of any type.

The results are fairly similar across each of our risk terrain models, which would suggest that ecological advantage is a universal concept and that a suitable location for selling one type of drug is likely to be suitable for selling other types of drugs. However we do note a few differences in the particular set of environmental features associated with each drug type and the amount of risk they pose for drug dealing. For example, parks and homeless shelters increase the risk for heroin dealing, but not cannabis, crack, or cocaine dealing. These divergences suggest that certain environmental features provide the necessary ecological advantage for selling certain types of drugs, meaning that the locations where different drugs are sold could also vary. 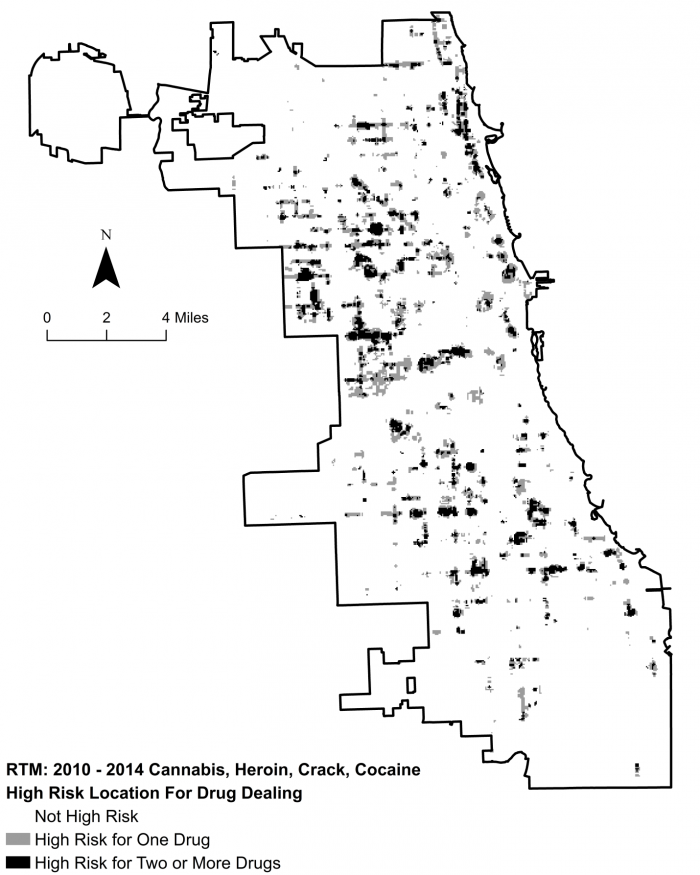 Our research demonstrates a practical approach for generating actionable intelligence to highlight the environmental features that facilitate different open-air drug markets. This can help to more effectively deploy traditional policing strategies, such as directed patrols. The methodology used here and the results of this analysis could also be utilized to guide the development of proactive and place-based policing strategies, such as problem-oriented policing, situational crime prevention, and crime prevention through environmental design, which focus on altering or otherwise removing ecological advantages. These interventions are most likely to be effective in addressing drug markets. As improvements in open source data and crime analysis continue to grow, we expect future research to build upon our current findings and further improve public safety efforts.

This article is based on the paper, ‘Examining the Environmental Characteristics of Drug Dealing Locations’, in Crime & Delinquency.

Walter L. Campbell – Rutgers University
Walter L. Campbell, MS, is a PhD student at Rutgers School of Criminal Justice. He earned a master’s in criminology from the University of Pennsylvania. His research interests include geographic crime patterns and prevention, policing and homeland security issues, effective interagency collaboration, and program evaluation.

Sarah Trocchio – Rutgers University
Sarah Trocchio is a PhD student at the Rutgers School of Criminal Justice. Her research interests include formal social control in urban areas, criminal procedure, and the use of discretion in the criminal justice system.

Leslie W. Kennedy – Rutgers University
Leslie W. Kennedy is currently University Professor of Criminal Justice at Rutgers University and director of the Rutgers Center on Public Security. In his most recent research, he extends his interest in risk assessment, focusing on crime mapping and the development (with Joel Caplan) of risk terrain modeling (RTM) for use by police in preventing crime. He has published in major journals in criminology and criminal justice, including Criminology, Justice Quarterly, and Journal of Quantitative Criminology.