To Mexicans, US democracy is important. Now, Trump’s rhetoric is calling that into question.

To Mexicans, US democracy is important. Now, Trump’s rhetoric is calling that into question.

From the very beginning of his presidential campaign more than a year ago, one of Donald Trump’s main platforms has been to build a wall at the Mexican border. This, coupled with negative rhetoric about the US’ southern neighbors, has provoked much concern in Mexico, writes Jesus Velasco. He writes that this feeling of besiegement by Mexicans which recalls past US interference in Mexican politics is made worse by the lack of a clear policy towards the US by the country’s Peña Nieto administration. While historically Mexicans have admired US culture and democracy, Trump’s rhetoric is now calling that into question.

Late last month, Donald Trump, the American real estate mogul and TV celebrity, was officially declared the Republican candidate for the American presidency. Since the beginning of his campaign, Trump has captured the attention of people in the United States and around the world. His racist, xenophobic, and misogynist statements have provoked incredulity and astonishment but not indifference.

Mexico is one of many countries that have become increasingly dismayed with Trump’s success. Since the day he launched his campaign in June 2015, he has used Mexico as his favorite piñata.  He declared, “When Mexico sends its people…they are bringing drugs. They are bringing crime. They are rapists. And some, I assume, are good people.” This—and consecutive similar declarations—have provoked indignation and disbelief not only in the Mexican population and its intellectual and journalistic communities but also in the entire government.

Mexico’s proximity and “complex interdependence asymmetry” (to use Carlos Rico’s definition) with the United States has provoked much concern in the country. For Mexico, Trump represents a significant threat to the country’s national security, bringing back memories of the darkest moments in the history of US-Mexican relations. Trump’s attacks towards the Mexican people are provoking a strong disapproval of the United States in Mexico, questioning again—perhaps like never before in the last thirty years—the American democratic system, US interventionism, and Mexico’s political and economic alliance with the US.

Thus, for the Mexican government, Trump’s contentions are tainted by prejudice, racism, xenophobia and ignorance. His ideas of building a wall at the US-Mexican border and the notion that Mexico will pay for it are simply unrealistic. If Trump wants to initiate a trade war, both countries will be seriously affected. Lately, and in some ways unexpectedly, Claudia Ruiz Massieu, Mexican Minister of Foreign Affairs, asserted that Mexico would be willing to update NAFTA. http://www.reuters.com/article/us-mexico-trade-nafta-idUSKCN105299 This was a few weeks ago after President Obama strongly supported the agreement and Mexico was a serious opponent of renegotiating NAFTA. It is evident that the current Peña Nieto administration lacks a clear policy towards the United States in moments where Mexico feels similar to a fortress besieged by the statements of Donald Trump.

Journalists and intellectuals have a similar perspective. Victor Flores Olea, professor, journalist, and former Deputy Secretary of Foreign Affairs, stated that “all stupidities are embedded in Donald Trump.”

Luis Rubio, a Mexican public intellectual, opines, “If Trump wins the presidency, he will be a national security problem for Mexico.” Finally, Enrique Krauze, one of Mexico’s most distinguished intellectuals, noted, “Donald Trump is a perfect fascist. He fits the typology of a fascist. He has quoted Mussolini… Like a fascist, he has established direct contact with the people. He always talks about foreign conspiracies. He has a violent, emotional attitude. He appeals to the historical right of his people, in this case, nativism, xenophobia and racism. He speaks uncritically about war, violence, of what he will do with Muslim’s families, and the way he talks about the Mexicans.”

Furthermore, in his last contribution to the Spanish Paper El País, Krauze sustains that if Trump becomes the next president of the United States that “we will be close to a new war with the United States.” For him, this will not be a military war but a commercial, economic, social, ethnic, strategic, diplomatic and legal.” In all—at least for many Mexican journalists and intellectuals—Trump is basically a fanatic, ignorant, conspiracy-minded, and extreme-right ideologue.

Mexico’s negative reaction to the Trump candidacy has to be found not only in the insults expressed by him about Mexico and Mexicans alike but also because he represents a serious threat and deep disenchantment with the United States. The history of US-Mexican relations is full of American military, political, and economic interventions. We only have to remember the US-Mexican War of 1846-48 where Mexico lost 50 percent of its territory. The US has often interfered in Mexican politics and has also influenced the decisions of Mexican economic policies, seriously affecting their economy. In 1969, for instance, President Richard Nixon unilaterally authorized the closing of the US-Mexico border as part of his “War on Drugs.” Known as Operation Intercept, the United States significantly increased the inspection of everything that tried to enter the US. The border soon became a chaotic zone for three weeks (from September 21 to October 10), affecting the economy of both nations. Thus, Trump’s aggressive policy statements toward Mexico easily resurrect thoughts on those dark episodes of this bilateral relationship.

There is another element that is affecting Mexico’s view on the United States and the American presidential election. This component is the deep disappointment with the United States. Historically, Mexico has expressed great admiration for American democracy and its political system. Since independence, some Mexicans have been highly inspired by the US. The Constitution of 1824 reflects that influence—and also the influence of other countries like France and England. This historical trend has continued until today. In a survey conducted by the Division of International Relations at the Center for Research and Teaching in Economics (CIDE) located in Mexico, in 2014 the Mexican population and their leaders responded in the following way to the question of what they appreciate the most about the USA. 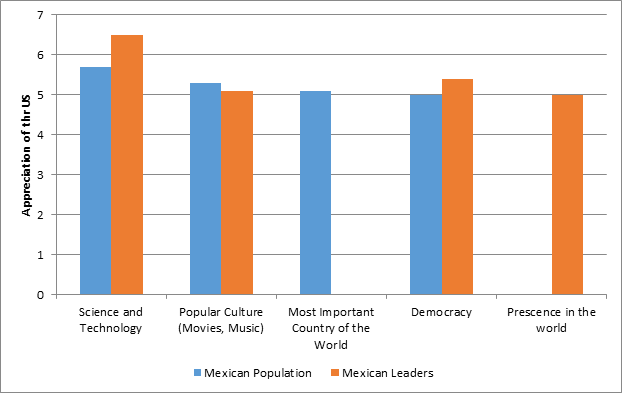 Evidently when Mexican intellectuals call Trump a fascist today—like many other people in the US and around the world—and when Trump labels the Mexican people as rapists and criminals, Mexico’s appreciation and admiration for American democracy comes into question. A permanent inquiry among Mexicans is how it is possible that in a democratic country like the United States we observe the rise of a person like Trump. The answer usually begins with the historical racist and xenophobic trends of the US, moves to Trump’s inspiration of millions of Americans, and ends in the crisis of American democracy and political system. Threat and disenchantment, concern and disillusion, fear and letdown are the feelings that currently are now being felt in Mexico and by Mexicans alike.

Mexico will continue to deal with the United Sates, its politicians, and its political system. How Mexico does it depends largely on the knowledge, capacity, and visions of the political and business elite. What is clear is that the Peña Nieto administration lacks the knowledge, vision, and policy design to confront not only a possible Trump presidency but any crisis in the bilateral relationship between the two neighboring countries.

Featured image credit: i threw a guitar at him. (Flickr, CC-BY-2.0)